Contrary to past emergency situations, the COVID-19 crisis seems to have helped improve the relationship between the Jewish and Arab communities. 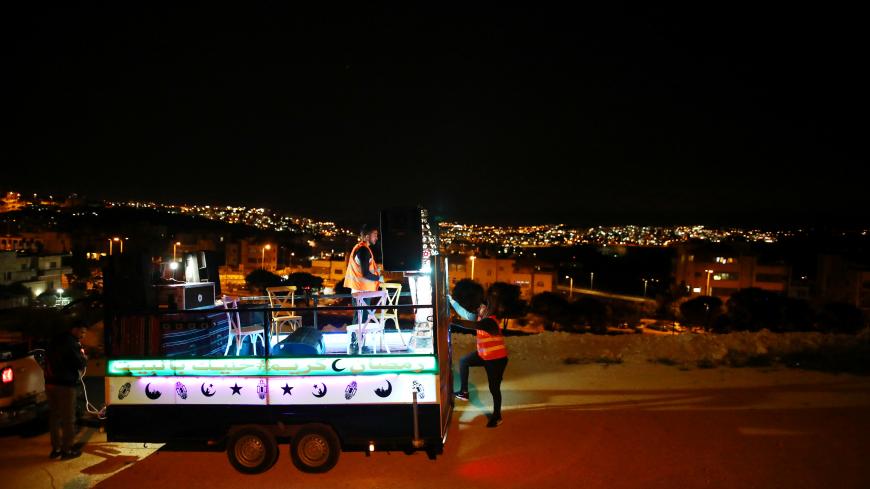 A festive Ramadan float drives through a street in East Jerusalem to bring celebrations to people under COVID-19 movement restrictions, May 3, 2020. - REUTERS/Ammar Awad

On May 3, the Finance Ministry released its plan for the country to end its coronavirus lockdown and return to normal. The plan includes the opening of malls, hotels and gyms and the gradual reopening of schools in the hope that all restrictions will be ended by mid-June. A state of emergency lasting almost two months and a partial mandatory lockdown were enforced in response to the worldwide COVID-19 pandemic, and particularly the spread of the virus in Israel. Now that an end to the crisis may be in sight, it is important to ask how it has impacted Arab-Jewish relations in Israel. Did it add fuel to the fire and fan the flames of animosity that have been spreading in the country over the past few years, encouraged by none other than the prime minister himself, Benjamin Netanyahu? Or did it actually strengthen the shaky relationship between the two communities?

The truth of the matter is that Israel has long gotten used to the idea that emergency situations (most of them based on politics or security) tend to increase tensions and exacerbate preexisting animosity between the Arab and Jewish communities. The best example of this is the Second Lebanon War. As I wrote in an earlier article in Al-Monitor, while 19 of the 44 Israelis killed in the war were Arab, the preponderant feeling at the time was that Israel’s Arab citizens were not fully part of the country or its struggles. In contrast, the COVID-19 crisis seems to have helped improve the intercommunity relationship. The fact that the virus did not distinguish between Arabs and Jews played an important role in reconciling them. So did images of Arab doctors and nurses (some 20% of Israeli medical staff are Arab) fighting relentlessly on the front lines in the battle against the virus.

By way of comparison, attitudes toward ultra-Orthodox society also experienced a shift as a result of COVID-19. The secular community was outraged at the high incidence of infection among that community, attributing it to lax attitudes toward social distancing and other measures intended to curb the pandemic’s spread. In the meanwhile, the coronavirus had the opposite effect on attitudes toward Arab citizens, and strengthened the relationship between the Arab and Jewish communities. All it took was a precursory glimpse at how the Arab community adhered to all government instructions, even shutting down its mosques and churches.

The improved relationship has extended into the holy month of Ramadan. Given the high rate of infection in the Arab community, and especially in villages in the north such as Deir al-Assad and Baanah (both of which were put under closure), the Home Front Command launched Operation Ramadan Nights. This included videos geared to the community, with verses from the Quran and quotes from the Prophet Muhammad, and even the delivery of holiday sweets directly to residents’ homes. The command also translated its website into Arabic for the occasion. As the unit's commander for Arab affairs, Col. Shams al-Fares (res.), explained, “People understand that this is a war that doesn’t distinguish between Jews and Arabs.”

Nevertheless, the big question remains: What will happen the day after the coronavirus crisis is over? Is this the start of a real romance and a turning point in Arab-Jewish relationship, or is it just a temporary fling that will vanish together with the coronavirus? Is the Jewish sector ready for a long-term shift in this relationship?

Ahead of Israel’s Independence Day on April 28, the Israel Democracy Institute released the surprising result of a survey on Israelis’ sense of belonging to the state. The survey found, among other things, a shifting trend among the Arab public. According to the study, 77% of Arabs feel that they are a part of the State of Israel and that they share in its problems (31% agree and 46% agree very much). These are by far the highest results seen in the past decade. In similar annual studies from 2014 and until 2019, for example, the percentage of Arabs who identified with the State of Israel and its problems ranged from 35% to 62% at best.

Can this sense of belonging be attributed to the coronavirus crisis, and will it continue into the future? “The truth of the matter is that this is an especially dramatic shift, when compared with last year. It shows an increase of 35%,” the institute's Or Anavi told Al-Monitor. “Given the enormous difference between this year and last, I would recommend looking at this trend over time. This dramatic shift should be taken in context. We must not build entire theories on the basis of a single poll.”

So what can be learned from the results of this survey? Perhaps that there is a willingness among the Arab public to integrate and play a greater role in Israeli society, including Israeli politics. Evidence of this can be seen in the way that the Arab Joint List acted unamimously to support Blue and White leader Benny Gantz in his bid to form a new government. This came in response to the mood on the Arab street, where people wanted to play the political game all the way until the bitter end. Even the Balad party [one of the factions that constitute the Joint List] was “forced” to support this recommendation. What is especially important to remember is that until the elections in September 2019 and March 2020, Arab parties did not make any recommendations at all, except in their historic recommendation of Yitzhak Rabin in 1992.

But this is the precise difference between the Arab community and the majority of the Jewish community, especially among right-wing voters led by Netanyahu. As long as we are talking about civil, and not political, struggles, campaigns that have no impact on who makes up the government, the Jewish community agrees for the Arabs to be part of the game. In contrast, it is important for Netanyahu that politics in Israel remain Jewish politics, and not Israeli politics, as I have written about. It is important for him that Israel’s Arab citizens continue to be excluded from Israeli society at large and that they do not receive legitimacy. He wants to exclude them from influencing the political arena and be content with involvement in civil issues only.

Maybe the difference between the 2019 and 2020 surveys can be explained by the fact that the 2019 study was conducted after the first round of elections in April 2019. The Arab Joint List was split into its separate factions then, while Netanyahu ran a divisive campaign attacking the Arab community. In response, the Arab public expressed its revulsion toward the elections by remaining home instead of going out to vote. No wonder the number of Arabs who voted then stood at only 49%.