The issue of what to do with Islamic State prisoners in northeast Syria continues to be a nagging problem. 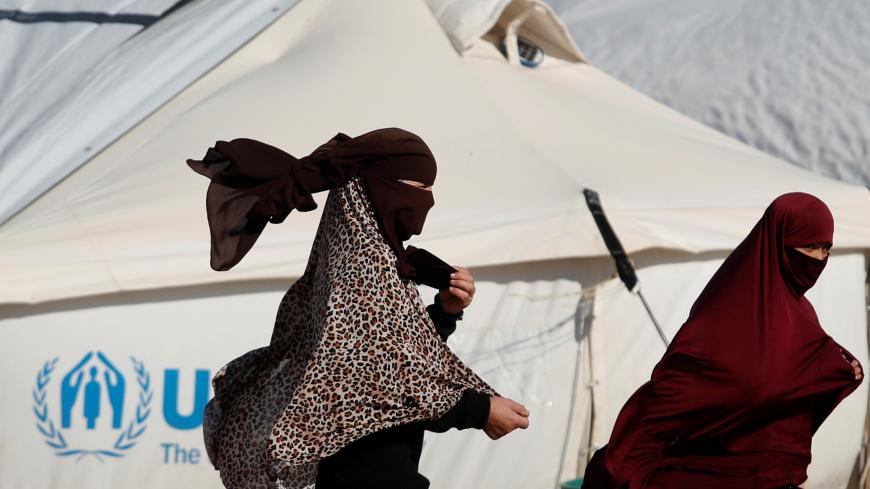 Women walk past a tent in al-Hol camp in Hasakah province, Syria, Jan. 8, 2020. What to do with Islamic State prisoners, and the detained families of Islamic State members, continues to be a major challenge in northeast Syria. - REUTERS/Goran Tomasevic

As battle-hardened Islamic State prisoners grow increasingly restless in northeast Syria’s detention centers, Kurdish authorities are warning of their potential to exploit gaps in security while the international community’s attention is focused elsewhere.

IS fighters took control of a large prison in the northeastern Syrian city of Hasakah on Saturday, according to the US-backed, Kurdish-led Syrian Democratic Forces (SDF) that run the facility. The riot ended a day later when the SDF and members of the American-led coalition fighting IS negotiated with the militants.

SDF spokesperson Kino Gabriel told Al-Monitor the talks with the detainees included their demands for improved living conditions and greater access to information about their fates.

“There is no timeline. We are working to make their living situation better, but it’s not something easy that we can do,” said Gabriel. “It’s our demand to the international community to reach a solution on this.”

The Hasakah prison incident was the second such riot in a little over a month. In late March, several IS militants managed to escape the same facility, but were apprehended the next day. The prison unrest comes as remnants of the terrorist group are stepping up attacks and assassinations in Syria’s eastern desert region, as well as in neighboring Iraq.

“[IS] will continue to seek to overwhelm SDF defenses of the prisons, both from prison riots inside and attacks from outside,” said Nicholas Heras, a Middle East expert at the Washington-based Institute for the Study of War.

“Most of the SDF-run prisons are small facilities where IS prisoners are crowded tens or hundreds to a room,” Heras said. “These prisons require guards, administration, food, medical care that the SDF can barely provide.”

When Turkey invaded northeast Syria in October, IS suspects welcomed the distraction. US officials said more than 100 detainees escaped as the Turkish shelling against Kurdish forces intensified and those guarding the facilities were redeployed to assist in the fighting.

The long-term security of the prisons and the potential for detainees to escape remains a concern for Pentagon officials.

“The longer IS prisoners are held in SDF prisons, the greater the potential for them to organize breakouts,” said a Defense Department Inspector General report from January.

In an audio recording released in September, then-IS leader Abu Bakr al-Baghdadi called on his adherents to free detainees and their families from “prisons of humiliation.” Baghdadi was killed in October. More recently, the extremist group’s weekly newsletter encouraged jihadis to free IS prisoners as the coronavirus diverts the attention of the governments that hold them.

Although just one COVID-19 death has been reported in the northeast, experts say a mass infection among detainees is a real possibility given the region’s war-battered health infrastructure and the severe overcrowding at its prisons.

“The administration's resources are woefully lacking and their capacity is waning,” Khalifa said. “Should this virus hit these densely populated detention facilities, or much of northeast Syria, we risk being in a position to witness a major outbreak.”

Informal SDF-run detention centers across northeast Syria hold more than 12,000 IS fighters, according to Gabriel, most of them from Syria and Iraq. An estimated 3,000 are foreigners who traveled from Europe or elsewhere to join the group.

The SDF has repeatedly called on foreign governments to repatriate their nationals, but most European countries have dragged their feet or flat-out refused to bring them home for prosecution. Some have gone as far as to strip the citizenship of their citizens, leaving the under-resourced SDF to deal with them.

The families of those fighters have ended up in the same legal limbo. Rights groups have sounded the alarm on squalid conditions inside camps hosting tens of thousands of IS wives and children. In the al-Hol camp in Hasakah province, hundreds of children are thought to have died from malnutrition, diarrhea and pneumonia.

But even in the cases of innocent and orphaned children born to foreign parents, many countries have refused to get involved.

“These people were already looked at as not worthy to come home, that they’re carrying a virulent ideology and they’ll infect others,” she said. “Well, now maybe they’re carrying COVID too.”

In the absence of repatriations, the SDF has asked that the international community at the very least provide more aid to the northeast, where an estimated 1.6 million people rely on humanitarian assistance and medical equipment is in short supply.

In late March, the US-led coalition came through with $1.2 million worth of supplies, which included masks, shields and batons for detention camp guards. But much more is needed, said Gabriel, who warned a major coronavirus outbreak would derail efforts by the SDF to rout the militants from the region. He said, “It would be hard to focus on our operations against ISIS sleeper cells or defend the area against any threats. It is hard now, and if any spread happens, it would be much, much harder.”