Kurdish authorities set to release Syrians from camp for IS families

Syrian detainees — mostly women and children family members of Islamic State terrorists — are to be released from the notorious detention camp al-Hol, yet foreigners will remain. 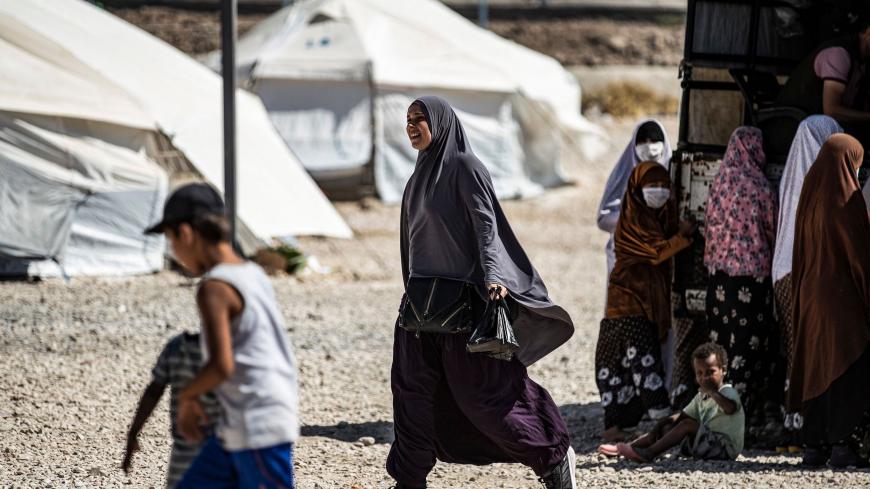 A woman walks past others gathering by the back of a pickup truck at Camp Roj, housing family members of people accused of belonging to the Islamic State group who were relocated from al-Hol camp, in the countryside near al-Malikiyah (Derik) in Syria's northeastern Hasakah province on Sept. 30, 2020.

Authorities in northeastern Syria have announced plans to grant amnesty to thousands of Syrians held at a detention camp, mostly women and children, and allow them to return to their families. Al-Hol camp west of Hasakah city houses over 60,000 people, including civilians displaced by the Islamic State’s (IS) war in neighboring Iraq as well as in Syria.

Many are thought to be families of IS fighters. Some of the women actively participated in their self-declared caliphate’s barbaric rule. Others were innocents forced to flee along with the jihadis as the US-led coalition and their Kurdish-led Syrian Democratic Forces (SDF) partners drove them out of one town after the other, culminating in their defeat at their last stronghold in Baghouz in March 2019.

The decision was announced on Oct. 3 in Raqqa by Ilham Ahmed, head of the SDF’s civilian arm, the Syrian Democratic Council (SDC).

Conditions at al-Hol are notoriously bad. The camp is overcrowded and underequipped. Sanitation is poor and health care almost nonexistent. Riots have frequently erupted among residents. IS women have sought to impose their own rule, meting out punishment to those who disobey. An unknown number have escaped. The SDF has long complained that it lacks the financial means to sustain al-Hol and other internment camps. Attempted breakouts have become routine.

Ahmed said legislation would be introduced to formalize the process of freeing the estimated 25,000 Syrians and granting amnesty for those deemed eligible. Around 17,000 of them are children.

In addition to the misery engulfing it, al-Hol is seen as a breeding ground for violent extremism. As such, “I think it’s a good decision to remove the Syrians from al-Hol, especially for the young children who bear no responsibility for [Islamic State] crimes,” said Amy Austin Holmes, a fellow at the Wilson Center. “It is an open question, however, as to how they will be treated once they return to their communities. The [local] administration has a policy to de-radicalize [IS] supporters, but they lack resources and so far the international community has not stepped up,” Holmes told Al-Monitor via WhatsApp.

Ahmed said some 10,000 foreigners (they do not include some 30,000 Iraqis at al-Hol) would remain in the camp, but they would be dealt with “in a different way.” She did not elaborate. Nor did she mention the Iraqis.

The local administration is demanding that foreigners be repatriated by host governments.

Canada’s Foreign Minister Francois-Philippe Champagne announced via his Twitter feed today that a five-year-old orphaned Canadian girl was being repatriated from Syria.

A small number, mostly children, have been taken back, but most governments are reluctant to do so on the grounds that they pose a security risk.

Anne Speckhard, director of the International Center for the Study of Violent Extremism, told Al-Monitor, “Most IS women did not have combat roles and do not have blood on their hands. However, there are also IS diehards and enforcers in al-Hol who are dangerous and should not be amnestied. They have killed, burned tents, harassed and beaten the others who are disillusioned and now hate IS.”

Ahmed did not say when the legislation or the amnesties would be rolled out. Nor did she say whether coalition officials were involved in the decision-making process.

SDF sources speaking not for attribution, however, told Al-Monitor that coalition officials had been informed of the decision to free the Syrians, and the SDF hoped to collaborate with the coalition in vetting individuals who were slated to be freed. The sources said Syrians from areas under the Syrian government’s control did not wish to return for fear of retribution and would be permitted to stay on in the camp.

The sources said talks had been underway for several months with local Arab tribes to release Syrian families. One of the aims was to prevent middlemen from collecting bribes on false pretenses of securing the release of individual families.

A State Department official speaking on background to Al-Monitor was at pains to convey there was no discord. The official said in emailed comments, “We have discussed this with the SDC and understand what was conveyed about al-Hol does not signify a change in the process for Syrians to leave the camp, including security vetting, but rather a renewed effort by the Autonomous Administration to accelerate the release of Syrians as part of the ongoing return and reintegration initiatives.”

“As we have noted previously, the SDF has been working with local community leaders to successfully move Syrians, mostly mothers and children, from northeast IDP camps back to their communities in Syria in line with local customs and agreements. Over five thousand have been reintegrated. Under a separate program, local Syrian authorities have held Syrian fighters to account where appropriate and supported reintegration back into local communities under tribal and family oversight. The SDF and civilian authorities have managed these programs responsibly and we expect that they will continue to do so," the official added.

In a late night tweet yesterday, Ahmed sought to clarify her earlier comments. Ahmed said, “Only the Syrian families who wish to leave al-Hol camp are free to leave.The families of foreign fighters and Syrians who have serious accusations will remain in the camp. The status quo of the camp will remain the same.”

Nicholas Heras, a Syria expert at the Institute or the Study of War, a Washington-based think tank, said, “The SDF is under extreme pressure from the local Syrian tribes to release women and children from al-Hol. This situation was a major stress factor between the SDF and the tribes in eastern Syria.”

Heras added in emailed comments to Al-Monitor, “The SDF is essentially relying on the tribes to faithfully implement an honor system that the women and children will not turn into seeds of IS ready to spring up into a new caliphate. The SDF is transferring responsibility onto the tribes to make sure that emptying al-Hol of local women and children, many of whom may still have some sympathy for [IS], does not become a catastrophic security risk.”

The plan, however, remains vague. It’s unclear, for instance, what will happen to orphaned Syrians at the camp.

Dareen Khalifa, Syria analyst for the International Crisis Group, said, “An uncoordinated blanket release would be detrimental. There aren’t any serious programs in northeast Syria that help reintegrate the released families, whether by providing social or mental health support.”

Khalifa continued in emailed comments to Al-Monitor, “The SDF’s waning capabilities and resources and the limitations they place on NGOs place the burden on local communities to integrate deeply traumatized and often radicalized women and children. That said, I doubt that the SDF will risk the security of the area by rushing into releasing all Syrians at once. They fear the chaos that might ensue more than anyone else.”

Editor's note: Oct. 6, 2020. This article has been updated with a statement from the State Department.