A new Iraqi government has been finally formed after months of deadlock and a political crisis that hit the country’s stability and economy. 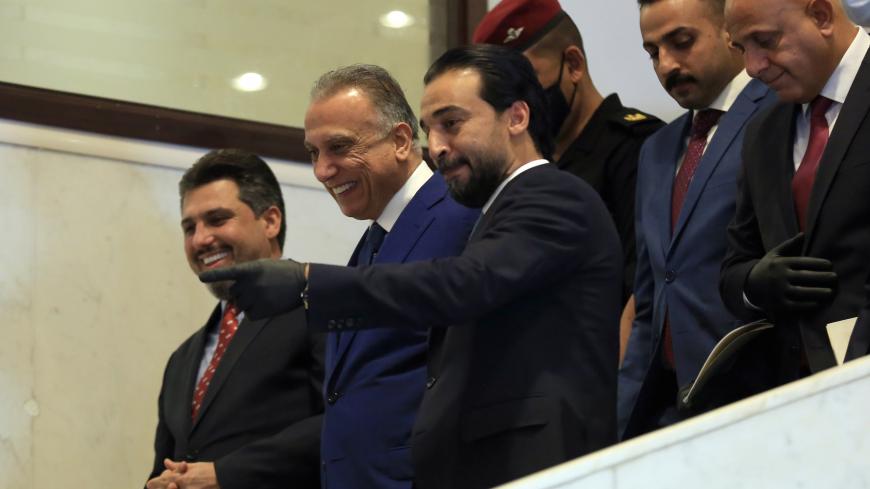 Iraqi parliament Speaker Mohammed al-Halbusi (C) points as he stands next to a smiling Iraqi Prime Minister-designate Mustafa al-Kadhimi (2L) after Kadhimi received a vote of confidence at the parliament in Baghdad, May 6, 2020. - Murtadha Al-Sudani/Anadolu Agency via Getty Images

A new Iraqi government has been finally formed after months of deadlock and a political crisis that hit the country’s stability and economy. The majority of ministers proposed by Prime Minister-designate Mustafa al-Kadhimi were approved by parliament, thus allowing the formation of a new government only days before his 30-day deadline to form a government.

Out of a total 329 members of the parliament, 266 attended the session late May 6, which was followed by a long discussion and negotiation between the prime minister and the head of parliamentary blocs.

Kadhimi was serving as director of the Iraqi National Intelligence Service when he was designated by Iraqi President Barham Salih on April 9 to be prime minister. The previous two nominees, Mohammed Tawfiq Allawi and Adnan al-Zurfi, were unable to form a government.

The parliament voted on the prime minister’s program and approved about two-thirds of the Cabinet — including those up for the key ministries of interior, defense, finance and electricity. Kadhimi will present new names to parliament at a later date in subsitution for Cabinet nominees who were rejected.

Why it matters:  In his speech to the parliament, Kadhimi emphasized the sensitivity of the moment, as the country is facing great economic, security and health challenges. He also emphasized the unity of the country, expressing his readiness to work with all parties to overcome the crisis, calling his government “a solution government, not crisis government.”

Kadhimi promised to organize early elections and form a transitional government that takes the country out of the crisis and toward stability.

In his program, he prioritized the country’s sovereignty and bringing all armed groups and militias under control of the prime minster as the commander in chief of the armed forces, and preventing Iraq from being a battleground between regional and international forces.

He also focused on protesters' demands, promising to fulfill them and protect freedom of expression and the right to protest. Solving the disputes between the central government and the Kurdistan Regional Government was also among the issues he mentioned in his program and speech.

What’s next: The parliament approved 15 members of the Cabinet, including Juma Enad for the Defense Ministry, Othman Ghanimi for the Interior Ministry, Ali Abdul Amir Alawi for the Finance Ministry and Nabil Kadhim for the Higher Education Ministry. Nominees for the ministers of trade, justice, culture, migration and agriculture were rejected and the parliament postponed voting on the candidates for the Foreign Ministry and Oil Ministry.

Most of the new ministers are technocrats who have long worked in their areas of expertise. The new government has received substantial internal and external support, including from both Iran and the United States. This could facilitate the government important tasks in overcoming the great challenges and threats that the country is facing.

Know more: For more information about the new Iraqi prime minister, see this piece by Al-Monitor staff after Kadhimi was initially chosen. Also check out Ali Mamouri's piece on the preparation for forming the new government.