Most of new Prime Minister Mustafa al-Kadhimi's Cabinet members are technocrats with long histories of working in their areas of expertise, with no or little affiliation with political parties. 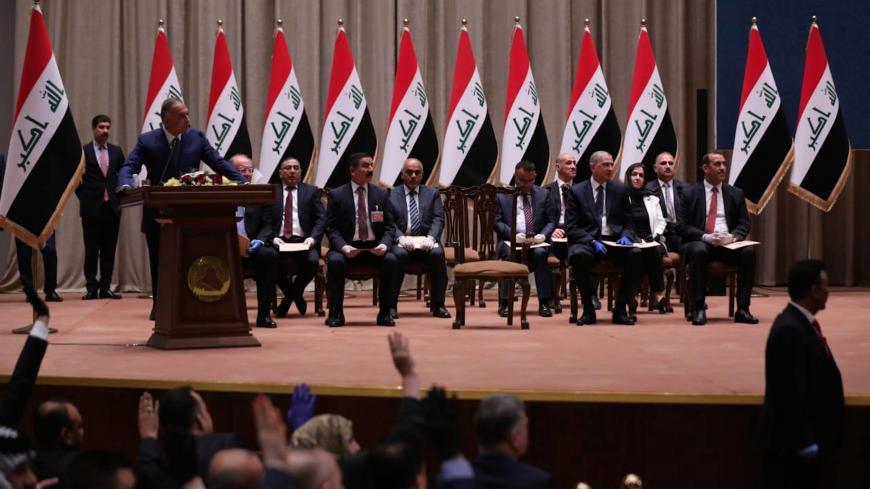 Iraqi Prime Minister-designate Mustafa al-Kadhimi delivers a speech during the vote on the new government at the parliament headquarters in Baghdad, Iraq, May 7, 2020. - Iraqi Parliament Media Office/Handout via REUTERS

After months of deadlock and political crisis, and following the failure of two other prime minister-designates, the Iraqi parliament finally approved Mustafa Kadhimi for the premiership  — also voting in favor of his government plan and 15 of 22 proposed ministers — on Wednesday. The remaining seven portfolios will be discussed and voted on later.

In an interview with CNN last month, Iraqi President Barham Salih said of Kadhimi, “We just appointed … the head of intelligence of the country. But this gentleman that has just been appointed is a former journalist, a human rights activist, and he's quite, quite well-known in the human rights circle.”

Kadhimi was a prominent member of the Iraqi opposition in the time of Saddam Hussein's Baath regime. He was a co-founder and executive director of the Iraq Memory Foundation, in charge of documenting the crimes under the regime. He was editor of Iraq Pulse at Al-Monitor from 2012 until 2016, when he was appointed as the head of the Iraqi intelligence service.

Kadhimi’s plan identified three main challenges for the country: its decline in security, its economic crisis and the COVID-19 pandemic. The plan includes comprehensive outlines for solutions to the three challenges in different areas of the government. He prioritized controlling the militias, protecting Iraqi sovereignty and economic development for the country.

Most of his Cabinet members are technocrats with long histories of working in their areas of expertise, with no or little affiliation with political parties.

1. Juma Inad — The new defense minister was born in the Sunni-majority Salahuddin province in 1956. He graduated with a master 's in military sciences during the Baathist regime. His career in the Iraqi army began in 1996, and he was commander of the army's ground forces before becoming defense minister. His role in fighting the Islamic State between 2014 and 2017 in his province is well respected by the Iraqi public.

2. Osman Ghanimi — The new interior minister was born in the southern province of  Qadisiyah in 1958. He has a master’s degree in military sciences. He play a significant role in reestablishing the Iraqi army after 2003, and this is well known and respected.

3. Ali Allawi — The new finance minister was born in Baghdad in 1948. He is a prominent Iraqi academic who served as minister of trade, defense and finance after 2003. He was the executive director of Arab International Finance and worked for the Washington-based World Bank Group.

4. Khalid Najim — The new planning minister was born in the western province of Anbar in 1976. He was the head of Anbar University before his appointment.

5. Hassam Mohammed — The new health minister was born in the eastern province of Diyala in 1969. He obtained a doctorate in pharmacy from Baghdad University in 2012. He has served in several Baghdad hospitals as director and deputy director.

6. Majid Mahdi Hantoush — The new electricity minister was born in Baghdad in 1961. He has a bachelor’s degree in engineering from Baghdad University. He previously served as general director in different areas of the Electricity Ministry.

7. Adnan Dirjal — The new sports and youth minister was born in Baghdad in 1959. He coached the Iraqi soccer team under the Baath regime and was a coach in several Iraqi and Arab leagues.

8. Manhal Aziz — The new industry minister was born in Mosul in 1964. He has a bachelor’s degree in physics. His career has mostly focused on the private sector of Iraqi industry.

9. Arkan Shahab – The new communications minister was born in Baghdad in 1977. He served as general director of projects and planning in the ministry.

10. Adil Hashush — The new labor minister was born in the province of Dhi Qar in 1968, and has worked in a number of governmental posts, including as administrative and financial director for the Commission of Persons with Disabilities and Special Needs within the Labor Ministry.

11. Ali Hamid — The new education minister was born in Baghdad in 1963. He obtained a master's in education from Al-Mustansiriyah University in 2005. He was a general director in the Education Ministry before his appointment.

12. Nazanin Mohammed — The new reconstruction, housing and municipality minister was born in Erbil in 1959. She served in Kurdistan Regional Government as minister of municipalities, reconstruction and development from 1999 to 2009.

13. Nabil Abdulsahib — The new higher education and technology minister was born in Baghdad in 1964. He has a doctoral degree from Moscow University in mechanical engineering. He previously headed Dhi Qar University and Al-Nahrain University.

14. Mahdi Rashid — The new minister of water resources was born in Baghdad in 1967. He has a master’s degree in water resources management. He was general manager of Iraqi dams and has served in many other positions in the Water Resources Ministry.

The rejected candidates are Ali Nawar Nasif for trade minister, Hashim Salih for culture minister, Ali Ismael for agriculture minister, Abdul Rahman Mustafa for justice minister and Hikmat Nasir for migration and displacement minister. Voting on the ministers of foreign affairs and oil has been delayed.

Kadhimi has expressed willingness to oversee the Interior Ministry and Defense Ministry, in addition to the intelligence service directly, in order to address the challenges in the security arena.

Although Kadhimi faces great challenges, he also has a great opportunity to help Iraq emerge from years of crisis due to his broad network and personal qualities.