Recent security incidents indicate that the Islamic State continues to operate in the Iraqi-Syrian border area despite reduced capabilities. 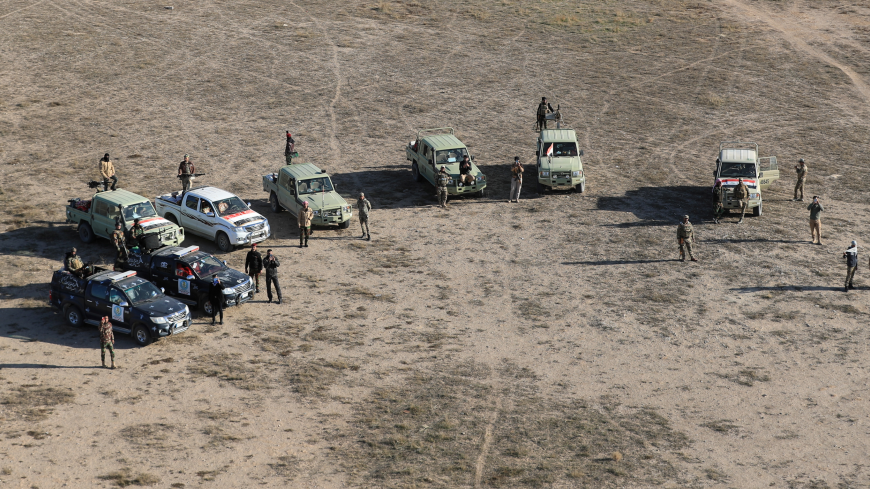 Recent security incidents show that the international terrorist group is still active on both sides of the border, though less so in Iraq than in Syria.

In early May, tribal fighters from Haditha in Anbar reportedly killed several IS fighters who had tried to take refuge in a village mosque.

An Anbar security source told Al-Monitor via WhatsApp that fighters led by a sheikh from the Jughayfa tribe had gone into the desert about 40-50 kilometers (25-31 miles) south of Haditha and saw five armed men enter the mosque. A shootout ensued, he said, during which the armed individuals blew up their suicide belts, killing all five. The mosque was destroyed, local media reported.

The Jughayfa tribe is the largest in Haditha, a town known in Iraq for its ability to have withstood a siege of over a year by IS without ever being taken by the group.

Some days later it was announced that local tribal fighters from the city had taken part in a security operation with the Iraqi army extending from Anbar into neighboring Salahuddin and Ninevah provinces to hunt down “infiltrators from across the border” and find any hideouts currently being used by the group.

Some 15 fighters were reportedly killed in the operation and 13 places of refuge and several vehicles used by the group were destroyed, according to local media.

Concerns have been voiced in some circles in recent months that the withdrawal of international coalition troops from several bases earlier this year — after a vote in the Iraqi parliament in January in favor of a resolution for the removal of foreign forces from the country — that a smaller presence could mean more opportunities for IS to regroup.

In January, a prominent Sunni member of parliament, Mohamed al-Karbouli, told this Al-Monitor journalist in Baghdad that the “western region of Anbar, Salahuddin and Ninevah,” provinces all inhabited mainly by Sunnis, “are large areas and contain many Islamic State [IS] hideouts. It will be impossible for the army to deal with them alone in the future” without outside assistance.

Officials in other parts of the country have said that a lack of intelligence following the coalition withdrawal from some of these bases likely played a part in some recent attacks.

In an emailed response to Al-Monitor’s questions about coalition support for the recent anti-IS operation in Anbar, deputy spokesperson Maj. Gabriela Thompson of Combined Joint Task Force-Operation Inherent Resolve wrote that the coalition provided limited intelligence support for the operation. She added, "The coalition works closely with the Iraq Ministry of Defense to mentor only vetted forces.  We did not train, advise, or directly support” the tribal forces involved.

Coalition spokesman Col. Myles B. Caggins III announced via Twitter on May 7 that the Syrian Democratic Forces (SDF) had been supported by the coalition across the border in eastern Syria in an operation targeting IS members "responsible for terrorist activities” the previous day, adding that one “mid-level fighter was detained by SDF.”

Ahmad al-Sawadi, the founder of the activist-run Euphrates Post news site, told Al-Monitor via WhatsApp that the man caught was an Iraqi. He said the current head of IS operations in eastern Syria is another Iraqi known as Haji Yasin al-Iraqi and has recently called for an increase in attacks on both Syrian government and allied forces as well as the SDF.

Sawadi is a Deir ez-Zor native who this author first interviewed in person in 2015 for Al-Monitor when he could not be identified by his real name for security reasons and went by the moniker Abu Mujahed. He maintains a wide network of sources on the ground in eastern Syria.

Other longstanding sources from Deir ez-Zor told this journalist prior to the death of former commander Abu Bakr al-Baghdadi in Syria that the former IS leader had repeatedly used local shepherds and Iraqi contacts to cross the border undetected. Though border surveillance has been stepped up, the vast desert between the two countries makes it difficult to ensure complete control by security forces on either side.

The Operation Inherent Resolve commander, Lt. Gen. Pat White, stressed in a May 8 briefing via telephone that IS capabilities had been significantly reduced compared with previous years even if roughly the same number of attacks had been claimed by IS in April 2020 as in April 2019.

IS “was able to conduct what I would describe as complex military operations in 2017, 2016, and their attacks consisted of VBIEDs [vehicle-borne improvised explosive devices] and rockets and small arms fire, all simultaneous,” he said in the briefing, in which Al-Monitor took part, whereas now they are limited to mostly “small arms — rifles, small-caliber mortars and no VBIEDs”.

IS fighters have, however, reportedly been using motorcycles to attempt attacks.

Iranian media cited Iraq’s Popular Mobilization Units commander for western Anbar, Qassem Musleh, as saying his forces had exchanged fire with militants before the IS fighters fled on motorbikes in an attempted attack May 9 in Akashat.

Concerning the other side of the border, Sawadi noted that Iran-linked Iraqi fighters had “sought to reinforce the positions of their forces” within villages in the Syrian Badia (desert) across the Euphrates River from the coalition-backed SDF-held areas in Syria.

He cited Harakat Hezbollah al-Nujaba as one of the Iraqi armed groups sending more fighters into the area in eastern Syria in recent weeks.

In January 2020, this journalist interviewed a Nujaba fighter in Baghdad who said he had fought on the side of Syrian government forces with other Iran-linked groups on the outskirts of Aleppo, Syria, in 2012, when IS did not yet exist but local armed opposition groups were gaining strength.

The fighter, who would have been around 15 years old in 2012, noted that all those in his group are now part of official Iraqi government forces and get a government salary.

The proximity and rivalry for power of these Iran-linked forces — sworn enemies of the United States, which plays a dominant role within the international coalition — is likely to continue to be a source of friction that could result in some room for maneuver for IS for the foreseeable future.