Recently unlocked phones show the man who killed three people at a Florida naval base had likely been in contact with al-Qaeda. 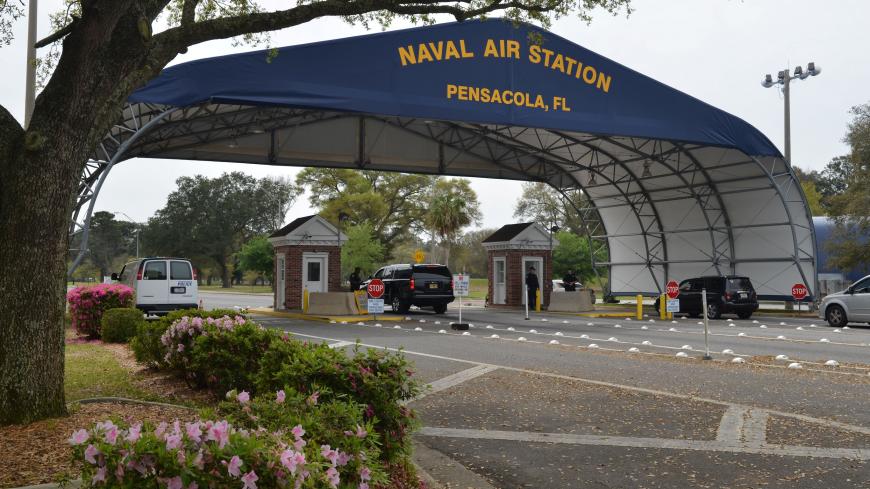 The main gate at Naval Air Station Pensacola is seen on Navy Boulevard in Pensacola, Fla, US, March 16, 2016. - US Navy/Patrick Nichols/REUTERS

The FBI obtained access to locked iPhones belonging to a Saudi military trainee who killed three people at a Florida naval base in December, revealing communications with a suspected member of al-Qaeda, CNN first reported Monday.

A Department of Justice statement on Monday alleged that Alshamrani had been radicalized as far back as 2015 and communicated with AQAP associates up until the night before his attack.

The statement also said information found in Alshamrani’s phone contributed to a counterterror operation that killed one of his alleged contacts in Yemen, Abdullah al-Maliki.

The US Department of Justice has said it considered the incident to have been motivated by “jihadist ideology.” AQAP subsequently claimed credit for the attack. The FBI said it has found no evidence that any of Alshamrani’s fellow trainees had any foreknowledge of the attack, which prompted tighter restrictions on foreign military trainees in the United States.

Barr suggested during Monday’s press conference that the FBI succeeded in opening the phone on its own after Apple declined to assist in doing so. “Thanks to the relentless efforts and ingenuity of FBI technicians, the FBI finally succeeded in unlocking Alshamrani’s phones,” Barr said.

Apple has refused Department of Justice requests to create a back door for encrypted and locked devices for law enforcement, even when a warrant is issued. Apple has said such a back door would leave devices vulnerable to other intrusions.

The FBI previously gained access to a phone recovered from Syed Rizwan Farook, who along with his wife killed 18 people in San Bernadino in 2015. The FBI reportedly did so without Apple’s assistance following a legal battle with the company.

The Department of Justice on Monday called for “a legislative solution” to its dispute with the tech giant.