Jerusalemites complain about discrimination at airports

The coronavirus appears to have exposed once more the cloudy status of Palestinian residents of East Jerusalem, as the deportation of a professor and the denial of boarding to some has left may worried that the legal status of 350,000 Palestinians is in danger. 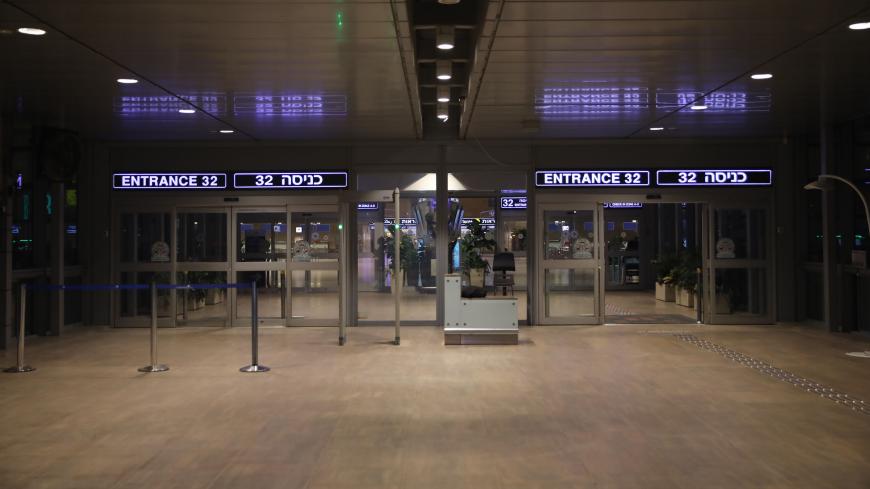 A photo shows empty Ben Gurion Airport after all flights were temporarily stopped as part of the novel coronavirus (COVID-19) precautions in Tel Aviv, Israel on April 21, 2020. - Mostafa Alkharouf/Anadolu Agency via Getty Images

When Khader Abu Alia, an English-language professor at Al-Quds University, boarded United Flight 90 from Newark to Tel Aviv, he had no idea that he wouldn’t be able to return home. He had traveled to the United States for a family emergency and was returning April 14 after a one-month stay. Upon arriving at the passport control of Ben Gurion Airport, he was told he is not an Israeli citizen and he was being deported. He showed them his Jerusalem residency card, his Israeli driver’s license and a returning resident visa valid until 2022. However, he was deported back to the United States on the same plane before having a chance to contact his employer or a lawyer.

Abu Alia has not been the only Jerusalemite who has found himself in a legal blackhole. Palestinian university students from Jerusalem with valid Israeli-issued residency documents were barred from boarding a plane back home. They were separated from Israeli citizens who were allowed to board an Israir Airlines flight back to Tel Aviv. Another group of students trying to return from Turkey were also not allowed to board their flight. In all cases, they were asked if they had an “ishur,” a permit issued by the State of Israel that takes precedence over any travel documents. No such permits were asked of Israeli citizens.

Since July 28, 1967, Israeli civilian law has been implemented in occupied East Jerusalem and its residents were given permanent residency. They are legally allowed to apply for citizenship — less than 5% have — but for the most part requests for citizenship are delayed for years.

Mohammad Maki, a second-year medical student in Russia, told Al-Monitor that he and others had bought a ticket on an Israir flight from Moscow to Tel Aviv on April 24. But at the gate, the airline would only allow Israeli citizens to board. “We were told that we were not allowed to travel and that we needed a special permit from the Israeli Embassy or Israeli Foreign Ministry,” Maki said.

Munir Nuseibah, head of Al-Quds University’s Community Action Center, took up the case of Abu Alia and assigned the center’s lawyer to follow up on the case. Attorney Muhammad Shihabi, coordinator of the center’s legal aid unit, told Al-Monitor that unclear directives were issued following the coronavirus outbreak that allow for the possibility of differentiation between citizens and residents.

Shihabi filed a pre-petition appeal to the Israeli High Court on April 18; the Israeli government replied on April 20 to follow up on the case of the professor with the Israeli Embassy in Washington. Failing to get any information in the United States, the lawyer sent a request to the office of the Israeli attorney general on April 29 and threatened a lawsuit in the High Court demanding the right of his client to return home and that compensation should be paid.

Ahmad Tibi, a veteran member of the Israeli Knesset, told Al-Monitor that upon hearing of the cases of the professor and the students his office intervened. Both groups of students from Moscow and Istanbul successfully boarded a plane. The Jerusalem Alliance to confront the coronavirus outbreak provided them space at an East Jerusalem hotel. The St. George Hotel, owned by the PADICO group, has agreed to cover the cost of all quarantined Palestinians at the hotel.

Tibi told Al-Monitor that he has succeeded in getting a permit for Abu Alia to return, and that the problem was the lack of clarity in the directives by the Israeli Ministry of Health. “There is no change in regulations and the rights of all East Jerusalem’s residents have been preserved,” he said.

The university students from Moscow had also contacted Tibi's office and the Israeli Embassy in Moscow and were able to catch the next flight on April 28 after paying a $70 transfer fee and accommodation costs in Moscow. “We really felt the racism and hatred toward us as Jerusalemites. It was as if they want us never to return to our homeland, but we will not give up our rights in Jerusalem.”

Nuseibah told Al-Monitor that the way that Palestinian Jerusalemites are being treated is very worrisome. “It is scary what is happening,” he added.

Nuseibah said that unlike people who enter a country and seek residency, the case of Jerusalemites is different. “We didn’t go to Israel, but in 1967, Israel came to us and forced themselves on us. We have rights as people under occupation regardless of what Israel decides.”

Another group of students and others stuck in Jordan appear to have solved their return problems. A Jordanian-Palestinian agreement reached on April 30 will allow some 500 Palestinians stuck in Jordan or having reached Jordan to return via the King Hussein Bridge, which will be temporarily opened on May 3.

For years, Israel has said that Jerusalem is united and the capital of Israel, but when the coronavirus crisis happened, they abandoned the people of East Jerusalem and denied their basic rights. The pandemic appears to have exposed the fault line that has existed in Jerusalem for over five decades. Despite the claims by Israel of having united the holy city, there is no doubt that there are deep divisions and discriminatory policies applied to Arab-Palestinian residents living in the eastern half of the occupied city.