In Yemen, where the health care system is dangerously overstretched and aid cuts threaten what remains, health care workers warn the country's battle against the novel coronavirus is only beginning. 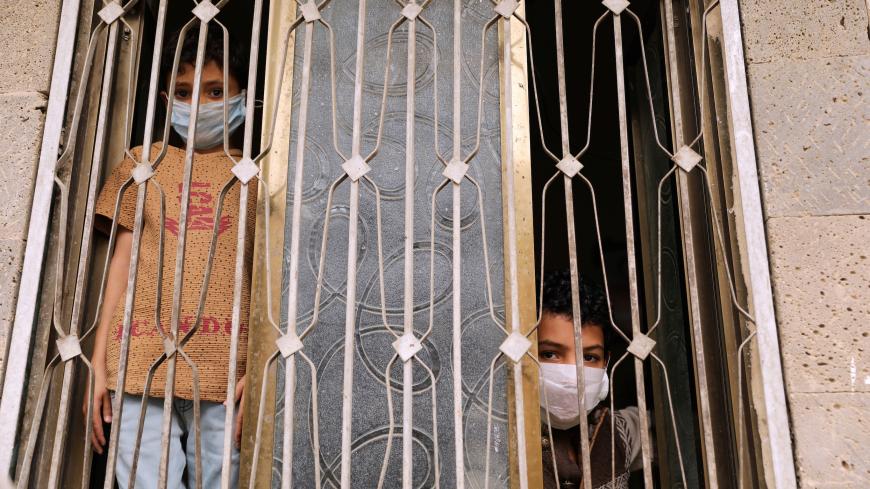 Children wearing protective masks look through a window during a 24-hour curfew amid concerns about the spread of the novel coronavirus in Sanaa, Yemen, May 6, 2020. - REUTERS/Khaled Abdullah

As life returns to a new normal throughout much of the world, health care workers in Yemen fear their war with the novel coronavirus has only just begun.

“The introduction of this virus in the current situation will be catastrophic,” Dr. Ilan Abdul Haq, a health official in the Taiz governorate, told Al-Monitor. “The health system has totally collapsed.”

For more than half a decade, Yemen has been embroiled in a conflict pitting the Iran-aligned Houthi rebels against a Saudi Arabia-led military coalition fighting to restore Yemen’s internationally recognized government. The bitter civil war has left Yemen’s health care system dangerously overstretched and 80% of the population reliant on some form of humanitarian assistance.

As if the situation weren’t dire enough, the United Nations is now warning dozens of its major aid programs throughout the country will begin closing down unless urgent funding needs are met. At least $2 billion is required to sustain essential programming through December, the UN said.

Some 80% of services provided by the World Health Organization are on the chopping block. Should the global health agency decrease its services, patients could be forced to travel hundreds of miles for treatment where it remains available.

In a move that could trigger a domino effect, the WHO has started slashing incentive payments for more than 10,000 health care workers across Yemen who would not otherwise earn a living wage.

Some doctors in Hodeidah haven’t been paid in months, said Dr. Ali Abdullah Al-Ahdal, who runs the health department in the western province. Many have left in search of work elsewhere and he’s been forced to hire unqualified staff in their place.

"I see how impatient and angry the employees are,” Al-Ahdal told Al-Monitor. “We are trying to calm them down.”

The COVID-19 crisis is also deepening existing cash concerns at the UN’s Population Fund (UNFPA), which helps pregnant women and victims of domestic violence. Faced with a $59 million funding shortage, the UNFPA pulled its services from 140 health facilities on Friday, cutting off 320,000 pregnant women from specialized care.

The health care situation in Yemen was grim well before the current funding crisis. More than half of all hospitals have been damaged or destroyed during the war. Those that remain functional face severe shortages of critical medicines and personal protective equipment following years of bombing and a Saudi-imposed blockade.

“The health system is already on its knees,” said Sultana Begum, advocacy manager for Yemen at the Norwegian Refugee Council.

“COVID-19 is a double disaster on top of a very difficult humanitarian situation,” she told Al-Monitor. “What we really need to be doing in a time like this is scaling up aid, rather than scaling back.”

The Donald Trump administration, which recently announced a freeze on US funding to the WHO, pledged $500,000 in COVID-19 assistance to Yemen earlier this month. Critics say it’s far short of what’s needed given the current state of health care and the potential for a wider outbreak.

Yemen has so far reported 106 infections and 15 deaths, although the true number is undoubtedly higher. Only four labs across the entire country are capable of testing for the virus.

In Aden, at least 385 people experiencing coronavirus-like symptoms have died in the past week, Save the Children said Thursday, citing local figures. The southern port city, which local officials have declared “infested” with the virus, is already struggling to treat diseases like diphtheria and measles.

Of particular concern is the mosquito-borne dengue, the flu-like symptoms of which are difficult to differentiate from the coronavirus. The start of the rainy system in April has also worsened Yemen’s cholera epidemic, already the world’s worst.

Having relied on food aid for years, a large portion of Yemen’s population is immunocompromised. An estimated 17 million people — more than half of Yemen’s population — are experiencing crisis levels of acute food security. Around 2 million children under five years old are suffering from malnutrition so severe they require treatment.

The United States and other donors accuse the Houthi rebels of interfering with food distribution and diverting supplies away from those who need it. After slashing $73 million in assistance for that reason in March, the Trump administration announced earlier this month it would provide $225 million in emergency aid for Yemen.

“This is what politicization of aid looks like,” said Aisha Jumaan, president of the Yemen Relief and Reconstruction Foundation. “I want them to define what critical services are. If food to help people who are experiencing famine is not critical, what is critical?”

In a letter this week, a group of US senators led by Ben Cardin (D-Md.) and Todd Young (R-Ind.) called on US Secretary of State Mike Pompeo and Acting USAID Administrator John Basra to clarify whether the United States would be providing any food security to northern Yemen.

Faced with dwindling food stocks, the WFP has scaled back the frequency of deliveries in northern Yemen. Families accustomed to receiving aid monthly now receive food assistance every other month.

The agency, which aims to feed around 12 million people across Yemen, hopes to scale up operations following a virtual donor conference hosted by the United Nations and Saudi Arabia on June 2.

But even if funding requests are met, the new pledges won’t mean an immediate restoration in aid, a WFP official told Al-Monitor. There’s a four-month lag time to source and transport food to Yemen.

Yemenis scraping by on meager wages are also having to contend with rising food costs. As worrisome as contracting the coronavirus is, the more pressing concern for many is where their next meal will come from.

“I’ve heard people say, I rather die of COVID than die of hunger because it’s going to be a faster death,” said Jumaan.