More than 50 progressive advocacy groups on Monday sent a letter to former Vice President Joe Biden, the presumptive Democratic presidential nominee, urging him to make concessions to the left on Middle East policy. 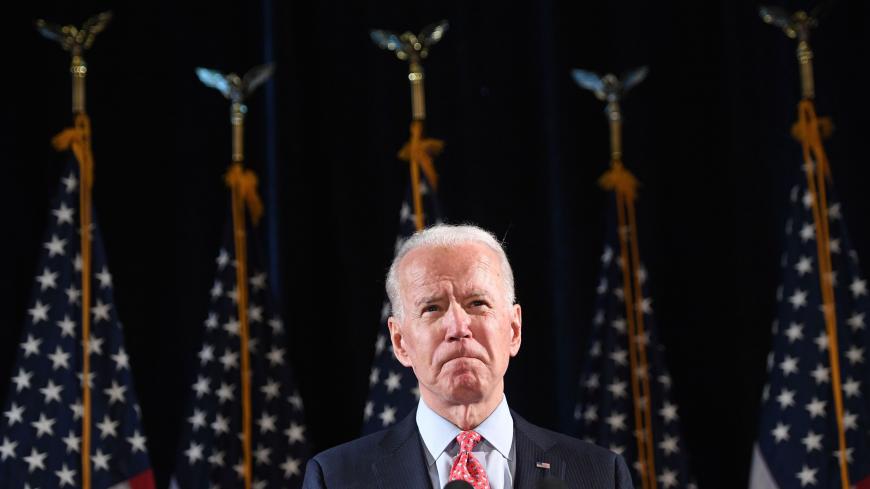 More than 50 progressive advocacy groups on Monday sent a letter to former Vice President Joe Biden, the presumptive Democratic presidential nominee, urging him to make concession to the left on Middle East policy.

The groups, led by Demand Progress, are calling on Biden to return to the Iran nuclear deal, leverage military aid to Israel to secure concessions over its occupation of the West Bank and blockade on the Gaza Strip and repeal the 2001 military authorization that serves as the legal basis for most US counterterrorism operations throughout the world.

“A failed post-9/11 agenda has resulted in global instability, countless lives lost and widespread violations of human rights,” said Yasmine Taeb, the senior policy council at Demand Progress. “By committing to prioritize serious diplomatic engagement and respecting congressional war powers, our leaders can end the forever wars and deliver an agenda more aligned with our values.”

Why it matters: Biden has already committed to reentering the Iran deal and negotiating a follow-up agreement. However, he has not yet publicly disclosed his position on repealing the 2001 military authorization. (House Democrats attempted to repeal the 2001 authorization within eight months as part of a defense spending bill last year, but had to abandon the effort as part of a compromise with the Republican-held Senate.)

Furthermore, Biden has outright rejected growing pressure from the left to use Israel’s annual $3.8 billion in military aid as leverage to stop it from annexing its West Bank settlements and the Jordan Valley — which Prime Minister Benjamin Netanyahu plans to move forward with in July. One major lobby group that has pushed for restrictions on Israeli military aid, J Street, did not sign onto the letter.

“That’s a bad idea because you’re giving Palestinians an effective veto,” said Harley Lippman, an executive committee member of the American Israel Public Affairs Committee, a J Street rival. “If you’re leveraging it, all they have to do is not show up to the negotiating table, and Israel will be denied aid. You’re giving them veto power, blackmail power, and they’d use it quite effectively to hold back aid to Israel.”

What’s next: While there’s largely consensus among Democrats on reentering the Iran deal, the Israeli-Palestinian conflict is likely to be a subject of contention among pro-Israel and pro-Palestinian factions as the party hammers out its 2020 platform this summer.

Know more: Several of the groups who signed onto the letter have successfully lobbied Congress to pass a war powers resolution limiting the White House’s ability to pursue offensive military action against Iran, which President Donald Trump vetoed last week. Bryant Harris has the story here.