The latest Saudi-led airstrikes against Houthi positions in the Yemeni capital Sanaa have ended all hopes for peace as the war-torn country braces for the coronavirus pandemic. 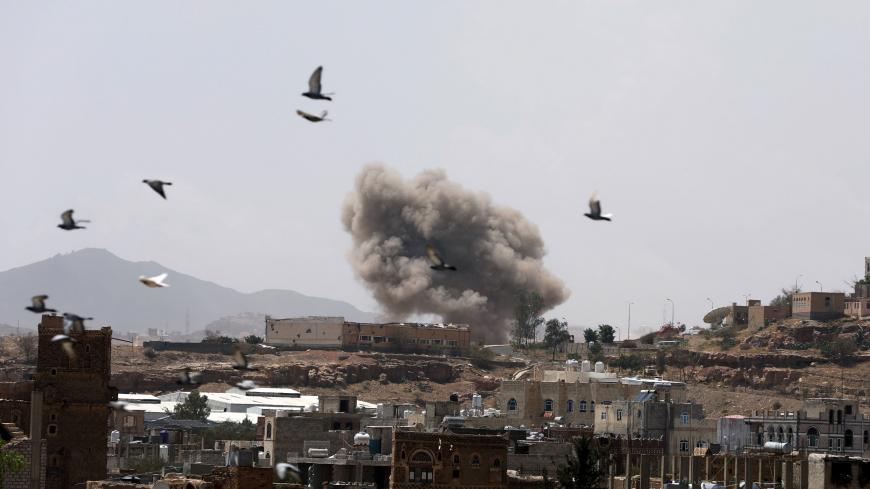 Dust rises from the site of a Saudi-led air strike in Sanaa, Yemen, March 30, 2020. - REUTERS/Khaled Abdullah

A barrage of Saudi airstrikes hit Houthi-held territories in Yemen March 29 and 30 as the war has entered its sixth year. Saudi warplanes bombed various locations in Sanaa, including the military academy. Reports have put the Sanaa strikes on March 30 alone at 25. Other air raids pounded multiple locations in Hodeidah as well as Amran and Saada governorates.

The escalation means continued war and suffering in Yemen. While the Saudi-led Arab coalition justifies the extensive aerial bombing to fend off what it calls the imminent Houthi threat, the Houthis say have been acting to defend themselves and the areas under their control.

The Royal Saudi Air Defense Forces intercepted two Houthi ballistic missiles over Riyadh on March 28. Lt. Col. Mohammed al-Hammadi, media spokesperson for the Civil Defense in the Riyadh region, said the missiles exploded in the air and two civilians were injured when the wreckage landed. The attack on Riyadh provoked a brutal response including a flood of Saudi airstrikes on Yemen.

Col. Turki al-Maliki, the spokesperson for the Saudi-led coalition, stated March 30 that the purpose of the airstrikes is to “neutralize and destroy” Houthis’ military targets. Specifically, he pointed out that the strikes were intended to destroy the Houthis' military capabilities and Iranian operatives as well as the storage, assembly and installation sites of ballistic missiles and weapons depots.

The Saudi-led coalition has conducted over 250,000 airstrikes since 2015, when Saudi Arabia launched Operation Decisive Storm to fight the Houthis and restore the government of Yemen. Recently, the pace of aerial bombardment has intensified, reminding civilians in Yemen of the war's deadly first year.

Sanaa resident Amar Amri told Al-Monitor that a string of air raids hit Sanaa on March 29 and 30, shattering civilians’ hope for peace or at least de-escalation amid the COVID-19 pandemic.

“We [civilians] and vital infrastructure are the major victims of these airstrikes. The Houthis fire some missiles on Saudi territories but Saudis retaliate with dozens of devastating airstrikes. We are worried this cycle of bombardment exchange will continue,” Amri said.

“They just want to bomb anything. They have targeted buildings, humans and animals,” Amri said. He asked, “What wrong have the horse breeder and the horses committed? And will killing these horses bring victory to the coalition?”

Sanaa-based writer Mohammed al-Hojily called the latest air raids on Sanaa indescribable. He tweeted, “There are no words can describe this scene. There is no reason can justify this crime. There is nothing can erase this tragedy from our memories. … Saudi jets targeted almost 70 Arabian horses. Even animals didn't survive the US-Saudi war in Yemen.”

In late March, Saudi Arabia and Yemen’s Houthis expressed willingness to halt military escalation and shift their focus to combating the novel coronavirus pandemic. However, the recent tit-for-tat attacks have dealt a severe blow to the UN plea for a cease-fire.

Saudi Arabia and the Houthis began direct talks last September following the Houthi drone attack on the Saudi Abqaiq oil facilities, impacting crude production. With this fresh escalation, Houthi attacks and Saudi airstrikes are likely to intensify as diplomatic efforts have made no headway.

Mohammed al-Jaber, the Saudi ambassador to Yemen, told the Wall Street Journal March 31 that proposals for peace talks with the Houthis are still on the table. Jaber said, “We are committed to our de-escalation. We are ready to have a cease-fire in all Yemeni territory if they accept it.”

However, the Houthis expressed doubt about the Saudi call for peace. In response to the Saudi ambassador’s call for talks, Abdulmalik Alejri, a member of the Houthi negotiating team, said that “warlords” can never be sponsors of reconciliation.

The Houthi-run Saba News Agency quoted Alejri as saying, “Logically and politically speaking, it cannot be right that Saudi Arabia sponsors the war and the reconciliation at the same time. Such two opposites can never meet.”

Khalil Alomary, a Belgium-based Yemeni strategy researcher and journalist, said the Houthi-Saudi talks are doomed to failure. “The Houthis signed many agreements with the Yemeni government since 2004, but all agreements totally failed. I think the Houthi-Saudi peace talks will not succeed,” Alomary told Al-Monitor.

Alomary is critical of the United Nations' role in Yemen, saying, “The UN-led peace efforts in Yemen have been futile since 2014. Yemenis see the UN as a tool of the superpowers and their allies in the region.”

He explained, “The Saudi-led coalition does not have a clear war strategy in Yemen. Most of Yemenis believe that the coalition is not fighting for Yemenis' interests as it declared on March 26, 2015, to restore the legitimate government, end the Houthi coup and protect Yemen's national security.”

Alomary added, “The Saudi-led coalition has a hidden agenda in Yemen as well as the Emirates. The dynamics of war showed that the Saudi intervention aims to divide Yemen into three small [states:] north, south and east.”

The diversity of foreign and internal actors has complicated the conflict in Yemen. The tide of violence keeps rising and resolving the quagmire is unlikely to happen anytime soon as the threat of the pandemic looms over the already desperate humanitarian situation.