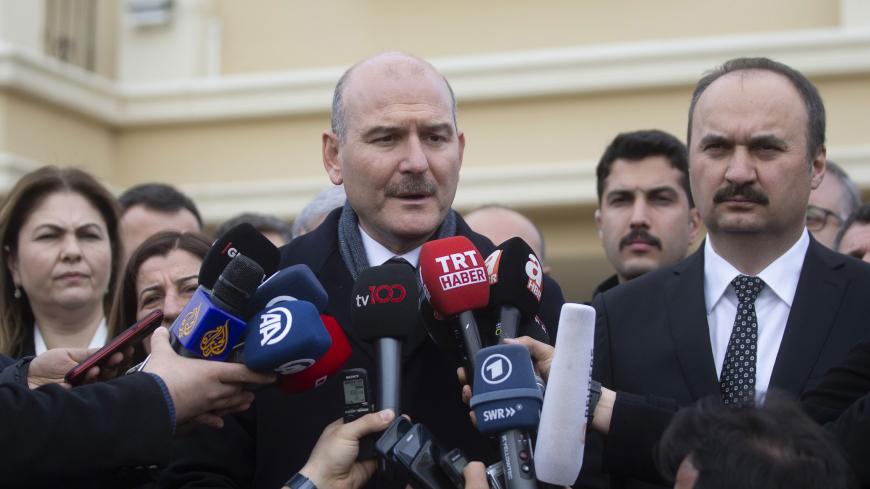 The effects of the abortive resignation of Turkey’s powerful interior minister, Suleyman Soylu, late Sunday continued to reverberate today, in what many see as widening cracks in the government of Turkish President Recep Tayyip Erdogan.

Soylu tweeted, “Responsibility for implementing the weekend curfew decision, which was aimed at containing the epidemic, belongs entirely to me.” The tweet, which has since been removed, triggered a tidal wave of support for him. It generated over 1.2 million tweets by the time the Communications Ministry issued a statement around midnight saying that his resignation had been withdrawn. In the Black Sea province of Rize, a man threatened to commit suicide by jumping off a balcony and changed his mind only after police convinced him that Soylu would continue to serve.

The affair highlights the government’s erratic handling of the COVID-19 crisis. Early measures, including banning flights from and sealing borders with neighboring Iran, have been lauded. But the government’s reluctance to introduce curfew measures against the advice of Health Minister Fahrettin Koca and the national Science Board has led to tensions. Erdogan is said to have resisted lockdown measures that would slow the economy and leave millions of citizens turning to the government for financial aid at a time when its resources are increasingly stretched.

Nothing threatens Erdogan and his Justice and Development Party (AKP) more than a deep recession, which seems increasingly inevitable as elsewhere across the globe. Investors have been further spooked by Erdogan’s refusal to accept any help from the IMF.

At least 1,296 people were reported dead from COVID-19 and 61,049 others infected at the latest count. The government announced the first fatalities in the country’s heaving prison population today with three convicts in an open detention center reported dead from the virus. A controversial amnesty law that excludes thousands of prisoners of conscience, including prominent Kurdish leader, Selahattin Demirtas, and philanthropist Osman Kavala, has yet to be approved by the parliament.

In what the opposition called a further blow to free expression, Erdogan and his nationalist allies in the parliament tabled an item to be inserted into the draft amnesty law that would specifically exclude those who commit crimes against Turkey’s national intelligence agency MIT. Critics say it will affect journalists who have been jailed for reporting on MIT’s covert activities in Syria and Libya.

They include five reporters who were detained in March for reporting on the funeral of a MIT operative who was allegedly killed in Libya in February on the grounds that the coverage jeopardized Turkey’s national security.

One theory is that Soylu preempted Albayrak’s long running campaign to unseat him by demonstrating his own strength through the reaction his resignation provoked. Another is that the whole affair was staged to deflect attention from Erdogan’s responsibility for the curfew fiasco, with Soylu offering himself as a fall guy.

Soylu, a right-wing nationalist, joined the government as interior minister in August 2016 in the wake of the failed coup, which he blamed on the United States, saying “everyone knows that America is behind the coup.” He has since become the public face of its deepening authoritarianism and in particular of unrelenting pressure on the Kurdish movement that has seen thousands of Kurdish activists prosecuted and jailed and the Turkish army invading Kurdish enclaves in northern Syria.

Unsurprisingly, Devlet Bahceli, the leader of the far-right Nationalist Action Party, welcomed news that Soylu was remaining in a flowery statement hailing the interior minister for his “combative personality” and success at a “very sensitive time.” Bahceli has since the botched putsch positioned himself as Erdogan’s informal ally and is believed to have inserted nationalists into positions of influence in the bureaucracy, many of whose ideology aligns with Soylu's.

Soylu thanked Bahceli for his support in a telephone call today.

But what of Erdogan? He has yet to comment personally on the affair. Erdogan announced today, however, that the weekend curfew would be reimposed April 17-19. Rumors flew that Erdogan was disgruntled by Soylu’s assertion in April 12 comments to the pro-government Hurriyet that the curfew was being imposed under the president’s orders. It did not go unnoticed that Soylu assumed blame for the implementation of the decision, not for the decision itself. Albayrak and his clique allegedly seized on Erdogan’s anger to persuade him to sack Soylu but were subsequently outmaneuvered.

It remains unclear where Erdogan stands: Is he sticking with Soylu to keep his brashly arrogant son-in-law in check? Or is he unable to fire him because of pressure from Bahceli and assorted other stakeholders? What is clear is that none of it has to do with advancing the cause of Turkey’s tottering democracy.

Tellingly, the English-language Daily Sabah, a government mouthpiece run by Albayrak’s associates, spoke of the “botched” curfew announcement when reporting why Soylu had resigned. But then, apparently once it realized he wasn't going, the paper assured readers in a pinned tweet, “We seek to maintain objectivity in our journalism, and our tweet fully reflects what Minister Soylu shared in his resignation letter on his Twitter account.”

Around the same time, presidential spokesman Ibrahim Kalin sought to fend off conjecture about any internecine squabbles, declaring on Twitter, “Our president has not accepted our interior minister’s resignation. He is continuing in the job. Nobody can harm our unity and solidarity.”

But according to prominent commentator Kemal Can the “fissures and cracks within the government are clear and impossible to conceal.”

Speaking on the independent online media news channel Medyascope TV, Can said the Soylu incident “is a portent of the violent turmoil to come.”

Fellow pundit Murat Yetkin declared Soylu the winner of this round, writing, “Soylu has got even stronger both in the cabinet and the AKP.”