President Recep Tayyip Erdogan’s rejection of his most popular minister’s resignation has led to questions about the new balance of power in Ankara amid the coronavirus pandemic. 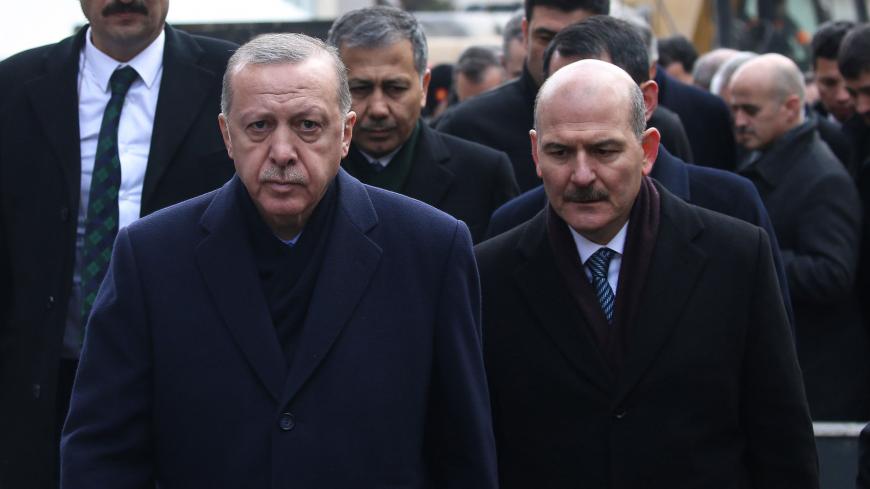 A few minutes after Turkish Interior Minister Suleyman Soylu posted his emotional resignation on Twitter, I received a call from a senior bureaucrat in Ankara. When asked about the resignation, he said, “Forget about the curfew and its implications. That decision was approved by Turkish President Recep Tayyip Erdogan. But this resignation tweet is Coriolanus' nightmare, when the best soldier in your army turns against you.”

Is Erdogan facing a potential rival in Soylu?

Despite increasing calls from scientists and politicians, the Justice and Development Party (AKP) government has not agreed to issue a long-term lockdown or curfew but rather has opted for increased daily surveillance and checkpoints. Traveling from Ankara to Istanbul might feel like a war zone as passengers need special travel permits and to clear ID checks as well as health exams that start with a temperature check. The imagery is designed to show Turks that the interior minister is keeping the country safe and secure.

In his now-deleted resignation tweet, Soylu assumed sole responsibility for the abrupt curfew decision. A day after the resignation, Erdogan applauded Soylu’s sense of responsibility. He went on to explain his reasons for rejecting the resignation: Soylu has been a successful minister in fighting against terror as well as dealing with natural disasters and now the pandemic. And that was the end of story, at least for those who believed that a government official had assumed responsibility and felt compelled to resign.

Yet, Ankara suits and keen observers knew Soylu did not resign due to guilt over mismanagement of a crisis. He resigned to make a point. He had done it before in February 2018. Erdogan’s reaction is almost the same in both instances. He had blamed the media and "trolls" and praised Soylu, to remind him that he needs Erdogan to continue as a politician.

Since he joined the AKP in 2012, Soylu rose quickly in its ranks and made himself a top insider. However, he does not come from an Islamist background and it is an open secret that there is strong resentment over his rise among loyal Islamist cadres. To make matters worse, Erdogan’s son-in-law, Finance Minister Berat Albayrak, is not fond of Soylu. In an interesting balance of power, while AKP elites and pro-AKP media outlets take the side of Albayrak, Soylu has found growing support among ultra-nationalists and the security forces — most of which is under his command.

“Soylu is seen as a savvy politician and the brightest image of Turkey's deep state,” said a senior bureaucrat. Soylu’s emotional speeches about martyrs and humble, hard-working imagery in times of disasters along with his brutal language against Kurdish politicians have resonated with many voters. Soylu has redesigned the AKP government’s domestic security strategy and managed to make it appear as a success story.

After his resignation was rejected, there were heated debates in the Turkish media about who holds the power as well as wider discussions of power struggles within the government. Both opposition and government figures are divided on the issue. This confusion makes it difficult to predict what to expect from Ankara. However, talks with sources close to the palace and top bureaucrats in Ankara point to several conclusions:

Soylu was pushed into a corner by AKP elites who are feeling the increasing pressures of a mismanaged COVID-19 pandemic. Knowing he is still useful for Erdogan, Soylu decided to back down and will continue to serve. Looking at other AKP insiders who have left, we see that their departures were marked by increasingly tainted media portrayals of their years of service. Soylu would be no exception. Erdogan will not let his best soldier leave, as he fears the rise of a potential challenger more than anything else.