Turkey’s Religious Affairs Directorate is accused of badly mishandling its response to the coronavirus pandemic and its credibility is increasingly under question. 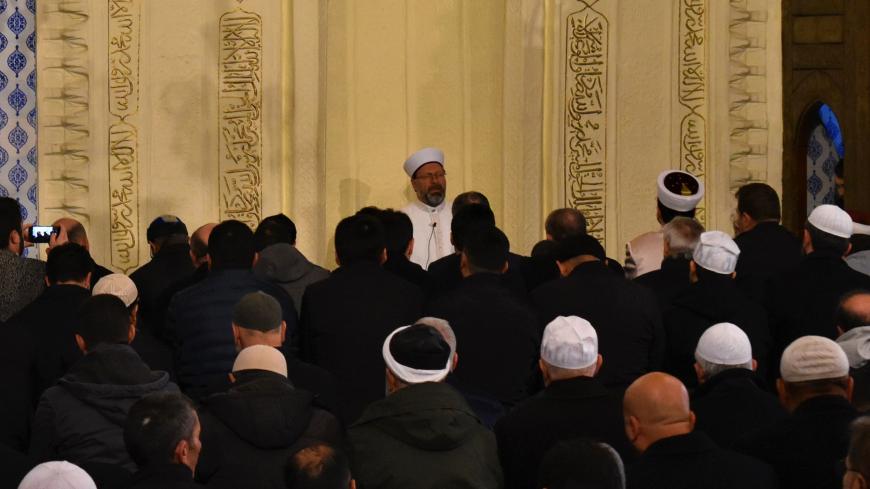 As the world goes through a deadly pandemic that is causing social disruption and economic loss, religion can be an essential source of individual comfort and communal solidarity. In Turkey, however, the Religious Affairs Directorate — Diyanet, the country’s main religious body that works directly under the presidency and coordinates most religious activity for the Sunni Muslim majority — has been embroiled in controversy over its response to the pandemic. At a time when fast-implemented public policies have been shown to be essential to saving lives, the Diyanet could have significantly helped Turkey battle the pandemic. Yet, Diyanet is under fire for not only failing to do so but probably even helping spread the outbreak to remote rural areas.

Diyanet is in the crosshairs over three main incidents. First among them is the umrah fiasco. Muslims from all around the world visit holy sites in Saudi Arabia throughout the year, not just during the hajj period. Those visits — called umrah — involve large congregations where social distancing is difficult. Most participants from Turkey are retirees over 65, who are considered high risk for the novel coronavirus.

All umrah visits from Turkey are coordinated through Diyanet and its affiliated institutions and approved travel agencies. As journalist Rusen Cakir explains, those trips, attracting tens of thousands of people from all corners of the country, are a significant source of income for Diyanet.

The umrah trips were not stopped until Feb. 27, which was simply too late to help. According to Diyanet head Ali Erbas, 21,000 pilgrims had yet to return from Saudi Arabia by March 15. Why were these groups allowed to travel when Ankara was already taking measures against the outbreak? In late January, Turkey’s Health Ministry successfully brought home and quarantined Turkish citizens from China. By Feb. 23, Turkey had stopped flights to Iran and imposed a stringent quarantine for those returning from the country. Still, elderly people were allowed to travel in large crowds to Mecca.

Upon their return, less than a third of the umrah travelers were haphazardly quarantined. Some of those kept in isolation tried to escape and complained they would get sick in the quarantine conditions.

Diyanet had announced that the returnees who were not quarantined were screened with thermal cameras and advised to self-isolate. Yet, as is tradition, many returnees accepted guests and some of the visits were shared on social media.

To make matters worse, members of the main opposition Republican People’s Party (CHP) claimed that returnees were given medication to conceal rising fevers prior to reaching the thermal cameras at customs. The medication allegedly allowed potentially symptomatic coronavirus patients to escape medical surveillance and return to their hometowns.

As confirmed COVID-19 cases and fatalities rose at an alarming rate, public criticism intensified. Even members of the ruling Justice and Development Party (AKP) could not keep quiet. For example, Recep Ozel, a senior AKP lawmaker from the western province of Isparta, posted — and later deleted — a tweet that out of 268 confirmed cases in Isparta, 245 were umrah returnees.

The central province of Konya is another region heavily hit by the virus. Fahrettin Yokus, a Good Party parliamentarian from Konya, lamented, “Judging by the statements of the health minister, most of those who lost their lives are umrah returnees. The head of Diyanet is responsible for that.”

According to a senior member of the Turkish Medical Association, one umrah returnee has infected 257 people in Konya alone.

In early April, Diyanet denied responsibility and claimed that no fever medications had been administered to returnees. The directorate said it would initiate legal action against those making the claims.

Besides the controversy over the umrah trips, Diyanet’s handling of Friday prayers has also been called a fiasco. Friday is the holy day for Muslims, when men congregate in mosques, standing shoulder to shoulder to pray. Despite warnings from the Health Ministry, Diyanet continued to hold Friday prayers until March 16, when it announced that due to the pandemic, Muslims are expected to pray at home. Members of different Islamic orders said they had expected Diyanet to make an announcement sooner as Islamic law clearly states that all needed precautions are to be taken during a medical emergency.

On March 27 a Friday prayer session was held at the mosque of the presidential palace in Ankara, now referred to as “VIP prayer.” While the rest of the nation was told to pray at home, a group of selected men were invited to pray at the palace’s mosque, while observing social distancing guidelines. Diyanet shared videos and photos from the event on social media, generating an uproar across Turkish society, including various religious orders and Islamist leaders furious over Diyanet’s disregard of Islamic traditions and laws. The notion of selected participants goes against the whole idea of “oneness” without any social stratification during Friday prayers.

The criticism was so intense that the pro-government daily Sabah reported that President Recep Tayyip Erdogan was unaware of “the VIP prayer.” In an effort to save face, Diyanet announced that every Friday an imam would lead a prayer session at a different empty mosque, in accordance with social distancing rules.

The public reaction highlights how Diyanet has come to represent the concerns of AKP elites rather than ordinary Muslims in Turkey. The gap between Diyanet and the public has become more visible.

On March 31, the government blocked fund-raising campaigns by CHP-run municipalities to help residents worst hit by the pandemic, with Erdogan calling the efforts “a state within a state.”

Meanwhile, Erdogan launched his own nationwide campaign, asking the public to donate money to help those in need. Diyanet promptly expressed support for Erdogan’s campaign, announcing a “fund for zakat.” All Muslims who have the financial resources to do so are expected to pay annual zakat, a form of alms-giving. Diyanet’s April 1 fatwa read, “It’s religiously permissible for the zakat to be collected and distributed to those in need via the solidarity campaigns launched nationally in these days.”

Yet the lavish spending of Diyanet’s top echelons and their apparent inability to relate to the financially struggling masses have compounded public anger. Even Islamists working for the government are disturbed, as several of them told Al-Monitor. “I decide who is best suited for my zakat, not the government,” one said.

Diyanet is a vast entity with almost 120,000 employees and a bulky budget. Many have come to question whether the institution is contributing enough to society, especially in the time of a pandemic. Although Diyanet’s TV channel reports that affiliated entities are reaching out to those in need, there is no information available as to how much is delivered and who is eligible for the aid.