The Turkish government is using the COVID-19 crisis to further squeeze rivals, this time with a criminal investigation into pandemic fundraising efforts by opposition mayors. 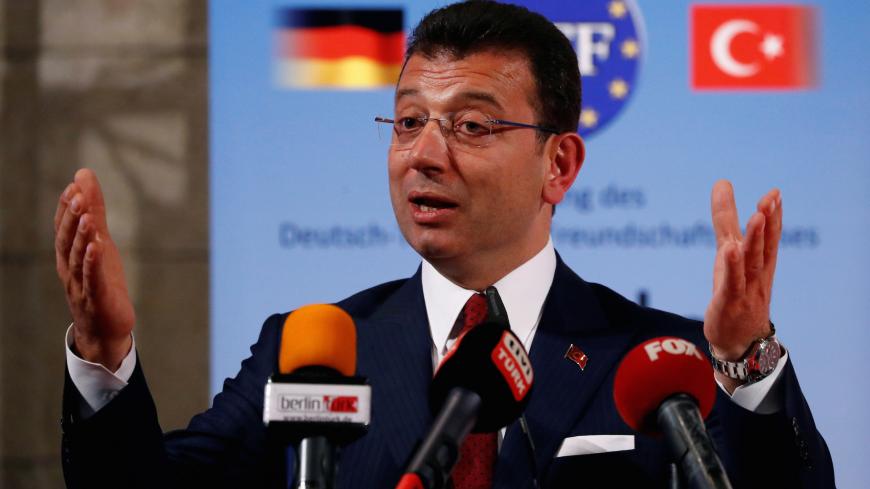 In an interview with the pro-secular opposition Sozcu newspaper, Imamoglu revealed that the investigations stemming from the mayors’ respective fundraising campaigns to help contain the novel coronavirus pandemic in their cities had started a week ago.

“Most probably inspectors will be dispatched to other mayors who are running campaigns as well. I am not alone,” Imamoglu said.

In a March 31 decree, the interior minister asserted that municipalities and other bodies were allowed to collect donations only if authorized by the local governor’s office. The day before, President Recep Tayyip Erdogan launched his own campaign to collect money from the public.

The state-run Vakif bank meanwhile froze the Istanbul municipality’s account, where some 900 thousand Turkish lira, about $130 million, in contributions had accumulated, Imamoglu said. Donations being made to the municipality via privately owned banks are continuing, however, likely prompting the government to strike. Imamoglu called the move “pathetic” and said Vakifbank had acted out of fear. “It’s a dark stain on the banking system,” Imamoglu said.

Yavas confirmed in a separate interview with Deutsche Welle Turkiye that he was the object of a similar probe.

At least 1,769 people have died from COVID-19, according to the latest figures published by Turkey’s Ministry of Health. A further 78,546 have been infected.

Eleven CHP mayors issued a joint statement yesterday calling for a long-term curfew or full isolation to shield the country’s urban population from the exponential growth of new infections.

The government has been harshly criticized for its recent handling of the disaster. A weekend curfew announced just hours before it went into effect last week unleashed a wave of panic-buying that likely caused further contagion. Imamoglu said he had not been consulted by the government on the decision. Istanbul, which is home to over 15 million people, is the epicenter of the crisis in Turkey.

The government has raised at least $245 million through Erdogan’s National Solidarity Campaign. A list of donors published by the pro-government Hurriyet yesterday included several Turkish conglomerates. Kalyon Holding and Limak Holding, which have won multi-billion-dollar construction deals from the Erdogan government, coughed up $1.8 million and $1.5 million, respectively. Erdogan, who is widely believed to be a millionaire, chipped in with seven months of his pay, amounting to roughly $721,657.

Legal experts say the government’s claim that mayors cannot engage in fundraising without prior authorization flies in the face of articles of Turkey's constitution concerning municipalities’ jurisdiction.

The moves are widely seen as yet another maneuver to deny opposition-run municipalities any chance to increase their popularity, in this instance by showing efficiency during the COVID-19 pandemic.

“The investigations are a further manifestation of existing pressure on local government,” said Sinem Adar, an associate at the Center for Applied Turkey Studies, pointing to the mass dismissal of opposition mayors in the mainly Kurdish southeast region who have been replaced with government appointees. As Al-Monitor contributor Mahmut Bozarslan recently reported, only 19 of the 59 mayoral offices won by the Kurds in the March 2019 municipal elections remain in Kurdish hands.

Adar told Al-Monitor, “The methods used to disempower local government are being deployed with even greater ferocity during the COVID-19 crisis.”

“The government has still not recovered from the shock of losing the big cities to the opposition last year,” said Utku Cakirozer, a CHP member of parliament. He told Al-Monitor in a telephone interview, “At a time when the entire world is looking for ways to protect their citizens against this calamity, in Turkey alone there is a government that is setting such concerns aside to focus on how it can best prevent opposition municipalities from performing their duties.”

On April 10, the Interior Ministry blocked the bank accounts of soup kitchens run by the municipality of Eskisehir, a long-running CHP stronghold and Cakirozer’s home constituency.

Cakirozer recalled that an omnibus bill centered on a controversial prisoner amnesty approved by the parliament on April 13 contained provisions waiving utility bills for citizens to help them weather the financial impact of the coronavirus crisis. “But it made no separate relief provisions for municipalities who rely on such income to provide services to the people. Trams run on electricity, for example. Municipalities could have been held exempt for the duration of the crisis as well,” he said. “The government could have, at the very least, frozen debt owed by municipalities to state banks. It’s clearly leveraging this pandemic curse to score points against the opposition.”

At the same time, the pressure being brought to bear on opposition-run municipal governments “further exposes the legitimacy crisis the government has been experiencing for some time,” noted Adar.

Correction, April 18, 2020: An earlier version of this article incorrectly said that Vakif bank froze 900 million Turkish lira in contributions to the Istanbul municipality.