President Recep Tayyip Erdogan insists his government should spearhead the fight against the pandemic and has stymied relief efforts in opposition-held cities, forcing local officials to come up with creative ways to deliver aid. 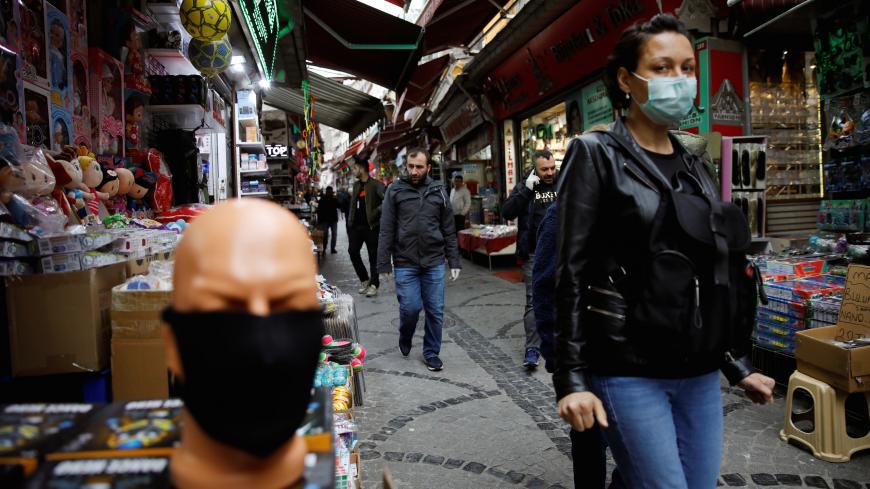 A woman wearing a protective face mask walks in a market in the Eminonu neighborhood of Istanbul during the novel coronavirus outbreak in Istanbul, Turkey, March 23, 2020. - REUTERS/Umit Bektas

ISTANBUL — Residents in the working-class district of Fatih, one of the hardest-hit areas in Turkey by the novel coronavirus, found some unexpected debt relief when they stopped at the corner shop to buy groceries.

Vefa Spor, an amateur soccer club, settled outstanding accounts at local shops last month to help its neighbors weather the economic fallout from the virus. The tradition of paying debts for food bought on credit has gained new momentum after Mansur Yavas, the mayor of the capital Ankara, appealed for the gesture, which “won’t hurt anyone’s feelings and can’t be impeded.”

Yavas’ call is one of the workarounds opposition-controlled municipalities have tapped after President Recep Tayyip Erdogan’s government intervened to stop their larger-scale relief efforts for the hundreds of thousands of people in need of assistance as the pandemic wreaks economic havoc.

Mayors have had charitable bank accounts frozen and face criminal probes and accusations of separatism over their response to the pandemic, which had infected more than 125,000 people and killed 3,397 as of May 3 in Turkey.

Erdogan argues that combatting the contagion requires “a centrally planned fight with strong coordination.” His government is offering income assistance and $15 billion, mostly in the form of tax deferrals for companies, after 150,000 businesses were closed to stop the spread of the virus.

The opposition accuses Erdogan of being more concerned with maintaining his grip on power than marshaling the ranks to battle the crisis. His Justice and Development Party (AKP) closed the parliament to curb the spread of COVID-19, rejecting calls from the Republican People’s Party (CHP) and Peoples’ Democratic Party (HDP) to keep the assembly open to help with the response.

The Turkish Medical Association, the country’s biggest physicians’ group, says it is excluded from the effort, and its members have been investigated for sharing data they’ve collected. So have tens of thousands of other critics for “provocative” social media posts.

“The government is using polarization at a time when we can’t afford partisanship. It is worried that if the CHP delivers services, citizens won’t vote for the AKP in the next election,” Canan Kaftancioglu, chairwoman of the CHP’s Istanbul branch, told Al-Monitor. “Municipalities act as the state’s representatives in the field to provide social services. Because their full logistical and technical know-how is not being utilized, people are suffering.”

Kaftancioglu, who faces a slew of criminal investigations for her criticism of Erdogan’s government, helped craft her party’s election strategy in 2019, when the CHP captured a string of mayoral seats from the AKP. For a quarter-century, Erdogan’s movement, which has roots in political Islam, had controlled Ankara and Istanbul and the multibillion-dollar budgets that allow mayors to hand out jobs and contracts.

“Hampering the municipalities’ aid is a political tactic by the AKP,” said political scientist Burak Bilgehan Ozpek. “It sees its political fortunes are enmeshed in the response and fears local administrators are winning prestige … [Erdogan] knows from his own past that people vote for whomever provides social welfare.”

An April survey by Istanbul Economy Research showed support for the AKP declined by 7 percentage points from the last general election. Erdogan remains Turkey’s most popular politician, but respondents rated the CHP mayors in the three biggest cities as “successful” in their coronavirus response.

In Istanbul, the epicenter of the outbreak with 60% of COVID-19 cases, municipal workers from city-run tea gardens have been redeployed to a warehouse to sort through donations of food. Supporters drove up with staples like flour and legumes to be boxed up for the more than half-million families in need.

A worker explained to a concerned caller he cannot accept cash contributions and to instead pick up vegetable oil at a nearby supermarket. Local administrations were banned from raising money a day after Erdogan launched his own fundraiser.

“Erdogan is a step behind the opposition,” said Soner Cagaptay of the Washington Institute for Near East Policy and the author of biographies of Erdogan. He blamed the president’s “hypercentralized” style of rule for failing to respond nimbly to the emergency. “He is no longer coming up with fresh solutions for Turkey’s problems, but has had to co-opt initiatives launched by the opposition.”

After Istanbul Mayor Ekrem Imamoglu began handing out protective masks, the government barred their sale and promised to distribute them through the postal service and pharmacies, but people struggled to obtain the gear required on public transportation and in supermarkets. In response, the city of Izmir, run by the CHP, set up “maskematiks,” vending machines dispensing free masks at metro stations.

In the mainly Kurdish southeast, where the HDP finds most of its support, barriers to delivering assistance are harder to overcome. Authorities have sacked the mayors of more than 40 cities since last year, part of a long-running pressure campaign on Turkey’s third-biggest party.

In March, the state appointed a trustee to the city of Batman a day after the municipality said it wouldn’t collect on water bills, said HDP vice chairman Salim Kaplan. Authorities said the dismissals were part of a terrorism investigation.

Erdogan has accused the CHP of behaving like organizations outlawed for terrorism for discrediting his government’s response to the pandemic in order to stir unrest. The crisis demands national solidarity, he said.

The CHP’s initiatives appear innocuous: The cities of Mersin and Mugla were forced to halt free bread distribution by the Interior Ministry. A roving brass band to cheer isolated residents was banned in the Istanbul district of Kadikoy. There have been other snafus. The Ankara municipality’s website for online donations to cover the costs of fast-breaking dinners in poor households during the holy month of Ramadan came under cyberattack “by ill-intentioned individuals,” though the city said it was ultimately able to complete orders for a half-million meals.

In extending a hand to city-dwelling poor, the opposition is taking a page from Islamist politicians, who gained popularity in the 1990s by expanding social services and providing cheap bread. In the local 2019 elections, the center-left CHP, long the reserve of the secular elite, put forward Imamoglu and Yavas as candidates with nationalist credentials and reconciled with the prominent role of religion in society.

The loss of Istanbul was especially bitter for Erdogan, who became a national figure when he was elected its mayor in 1994. He forced Imamoglu into a do-over election that his party lost by an even greater margin two months later.

Erdogan has dismissed his rivals’ outreach to the poor as insincere. “The CHP insists, in defiance of the rules of fighting an epidemic, on attempting to collect donations, distributing bread and establishing hospitals on its own — not in service of the people, but to show off,” he said.

But Yavas described his role as a “bridge between the people and the state” as close to 400,000 people seek assistance. He has hired unemployed truck drivers to deliver food bought from canceled street markets. Thousands of credit lines at small markets, butchers and green grocers were paid up after Yavas announced the campaign, his spokesman said.

Vefa Spor, the Istanbul soccer team, covered the IOUs because of a neighborhood tradition of looking after mothers who lost sons in World War I, said board member Mehmet Sutcuoglu. But he borrowed Yavas’ slogan to explain the act of goodwill. “Kindness is contagious,” he said.