The Islamic State is taking advantage of the coronavirus pandemic and resuming its activities against regime forces in the Syrian desert. 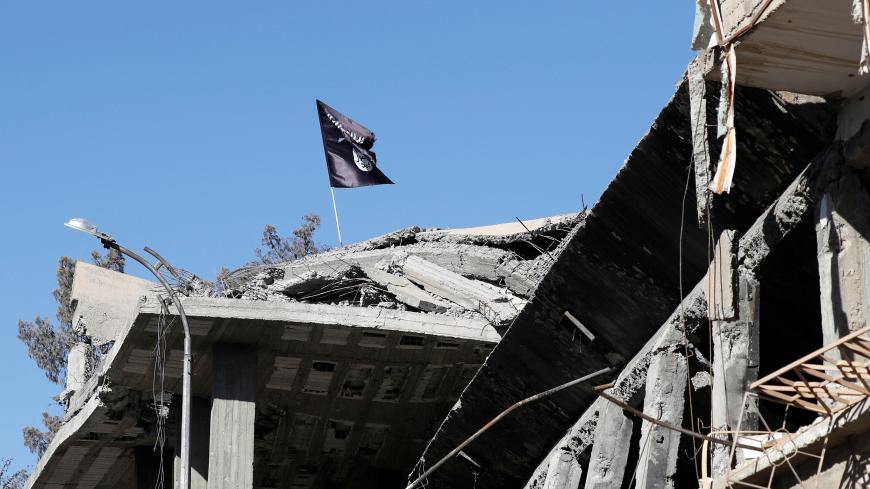 A flag of Islamic State militants is pictured above a destroyed house near the Clock Square, Raqqa, Syria, Oct. 18, 2017. - REUTERS/Erik De Castro

ALEPPO — A resilient Islamic State (IS) has become increasingly active over the past few weeks in eastern Syria, especially in the desert in the south and Kurdish areas in the north.

IS militants have launched attacks against Syrian regime forces and their allied militias, while also targeting the Kurdish-led Syrian Democratic Forces to a lesser extent. These attacks point to IS’ ability to restructure cells and carry out large-scale operations.

IS is likely to carry on its attacks, explosions and executions, especially in the eastern desert of the central province of Homs and the desert in eastern Deir ez-Zor. IS is taking advantage of the world’s and Syria’s preoccupation with the coronavirus crisis and the measures imposed to stem the spread of the coronavirus, including curfews and quarantines.

On April 9, IS targeted a regime convoy and military posts in the Homs desert. Russian aircraft launched a series of air raids against IS positions there. The clashes and airstrikes killed 18 regime fighters and allied gunmen, and 11 IS militants, according to the Syrian Observatory for Human Rights.

A military source close to the Syrian regime confirmed the battle, telling Al-Monitor on condition of anonymity, “IS attacked Syrian regime positions near Al-Sukhna … April 9 at dawn. The town is part of the Syrian desert where IS has been very active lately.”

The source added, “IS has various weapons, including heavy machine guns, mortars and rocket-propelled grenades, which they most probably obtained from the regime forces' warehouses and positions they previously attacked.” The source explained, “IS started the attack [April 9] with a car bomb, and violent clashes ensued between the two sides where machine guns were used … amid heavy artillery shelling and airstrikes by the Syrian regime forces.”

Meanwhile, IS reportedly kidnapped six shepherds in Raqqa’s countryside April 5; attacked regime positions in the towns of al-Jalaa, al-Abbas and al-Sayyal in eastern Deir ez-Zor, and killed a woman there April 6 for allegedly collaborating with regime forces; and killed two members of the pro-regime National Defense Forces, also in eastern Deir ez-Zor, on April 7, the same day members of Liwa al-Quds, a pro-regime militia, were killed there by a landmine.

All told, the observatory reported, “Between March 24 and April 9, more than 401 members of the regime forces and pro-regime militias, Syrians and non-Syrians, were killed" in IS operations.

Opposition forces continue to claim that Iran is determined to resurrect the once-powerful and still-brutal group.

“Iran has a great deal of interest in IS resuming its activities. We warn the international community that Iran could revive this terrorist organization," Mustafa Sejari, director of the political bureau of the opposition's Free Syrian Army (FSA) Mutasim Brigade, told Al-Monitor recently. "Our reports confirm that the [new] Iranian Quds Force commander, Ismail Qaani, is working to revitalize the terrorist organization in a bid to preoccupy the US and undermine its interests in Syria,” Sejari added.

On March 31, IS released its so-called Attrition Saga, which documents a number of recent IS operations. It depicts IS members moving easily around in the desert and shows that they have medium-size weapons and anti-tank missiles.

Yahya Mayo, media coordinator of the Turkish-backed FSA, told Al-Monitor, “IS’ latest video delivers multiple messages, most importantly that it opted for guerrilla warfare and ambushes to drain its adversaries. It also shows its ability to move freely in the Syrian desert, which serves as open space for resuming activities that deal painful blows [to the regime] using few members safely moving on secondary roads.”

Mayo added, “The recent video also shows that IS is keen on highlighting the usual violence and intimidation it pursues against the so-called collaborators of its foes.”