Jordanians cope with lockdown through humor, empathy and solidarity

Despite economic hardships and the lockdown imposed to curtail the spread of the coronavirus, Jordanians are coming together to help the needy while also turning to jokes to cope with this exceptional situation. 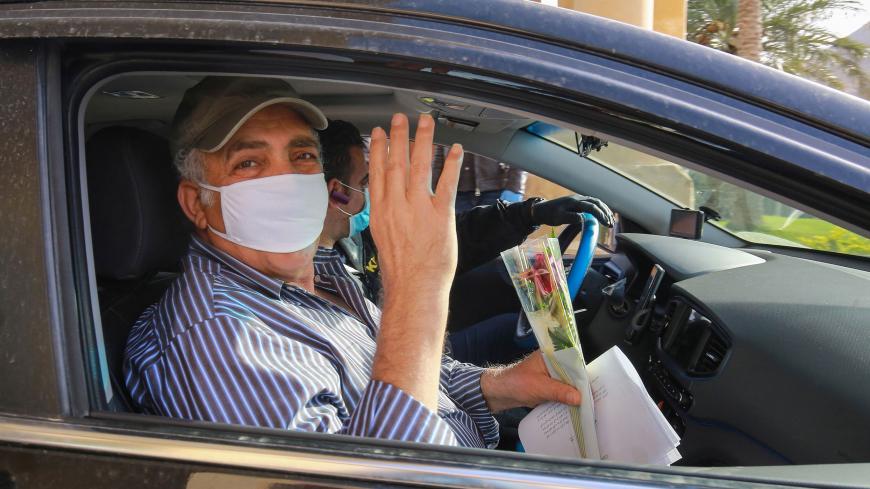 A man gestures as he leaves a Dead Sea resort in Jordan wearing a mask amid the coronavirus outbreak, March 30, 2020. - KHALIL MAZRAAWI/AFP via Getty Images

As the country enters its third week of nationwide lockdown, Jordanians are coping with curfews, self-isolation and social distancing. Indeed, the nation of almost 10 million is even finding a new way of adapting to the social and economic impacts of the novel coronavirus through humor.

Unlike Egyptians, who are famous for their quick wit and sarcasm, Jordanians are more generally viewed as reserved, serious and glum. But since the Arab Spring of 2011, the national mood has been changing. Increasingly, Jordanians have become more open in mocking dire economic and social conditions. In a country where 90% of households have a smartphone, Jordanians have become increasingly active on social media, especially Facebook, and exchanging messages and videos through WhatsApp.

Since the lockdown went into effect March 17, Jordanians have resorted to social media to express their frustrations while trying to cope with having to stay at home for weeks. On March 25, authorities eased restrictions after failing to distribute bread to households, and imposed a partial curfew from 6 p.m. to 10 a.m. while allowing people to shop during the day but only on foot. Trapped in their homes, Jordanians began exchanging jokes and parodies by making fun of the lockdown and of being stranded with spouses and children, and even posing cynical existential questions.

One joke that went viral goes like this: A daughter asks her mother, “Where is Dad, I haven’t seen him for while?” Mother replies, “He’s in the garden.” Daughter says: “No, he’s not.” Mother responds: “Well, you have to dig to find him!” Another popular joke is this confession by someone who says, “I have become so close to my wife under the lockdown that I almost told her about my girlfriends!” Another one says, “If you get coronavirus symptoms make sure you kiss your enemies on the cheek asking them for forgiveness!”

The sarcasm covers many topics: life under siege, marital relations, social distancing, China, dealing with children, men doing home chores, being stranded with a mother-in-law and end of days predictions, among others.

But there is another side to the effects of the lockdown. Jordanians are showing their generous nature as well. There have been a number of initiatives by young Jordanians to provide aid and food to needy families, especially in underprivileged provinces, as a sign of solidarity. A number of landlords have exempted tenants from paying last month’s rent. On the other hand, Jordanians’ sense of national pride has been lifted as they praised the army and security personnel who are overseeing the partial curfew. Ironically, a majority of Jordanians are defending the government’s strict measures to confront the coronavirus, even though this is the same government they ridiculed before the outbreak.

Another show of solidarity came in the form of tens of millions of dollars in contributions by individuals, medium and large companies, and especially banks, to public funds in support of the Treasury, the Health Ministry and the Social Development Ministry. The latter is providing food packages to thousands of Jordanian families. Wealthy Jordanian expatriates have also pitched in.

And just like Anthony Fauci, the American physician and immunologist who became a celebrity in the United States and a source of public trust, Jordan’s health minister, Saad Jaber, has emerged as a national hero for his charisma, good looks and reassuring nature. His daily evening briefing is watched by millions, and social media postings, particularly by women, present him as a savior.

Sociology professor Rami al-Habashneh of Mutah University told Al-Monitor that the crisis has brought out what is good in people as they show empathy with others and where the collective mindset overshadows individual behavior. “As a result of the lockdown, some negative social attitudes have been curtailed while positive values have been revived,” he said.

“When society feels impending danger, it reacts collectively and shows solidarity and discipline and this is what we saw in the many initiatives that were launched to help the poor and the elderly,” Habashneh said. He added that humor is one way of dealing with the unknown. But he was unsure whether the traditional greeting habit through kissing and hugging, which is practiced by most men and women, especially in public events, would die down as a result of the current health crisis.

Well-known Jordanian comedian Nabil Sawalha, who has been entertaining Jordanians for over four decades, told Al-Monitor that the newly found national sense of humor is a healthy sign. “This is a positive reaction at a time of national distress and it’s a way to reduce anxiety as we face uncertainty,” he said. “Laughter improves one’s immunity and it is great to see Jordanians, who are known for their distinctive frown, making fun of the lockdown.” But he added that the mockery will not last. “Those who are hungry and without a job will not see the humor and after a while people will get restless and anxious,” he said.

But for now and despite hard economic conditions, humor and empathy are keeping Jordanians united. But Sawalha warned that the government should be ready to deal with growing public unease and social unrest as the lockdown grinds on.