Egypt has struggled to lower divorce rates and to convince people to have no more than two kids, but the pandemic may challenge these polices, as more couples stay home during lockdown. 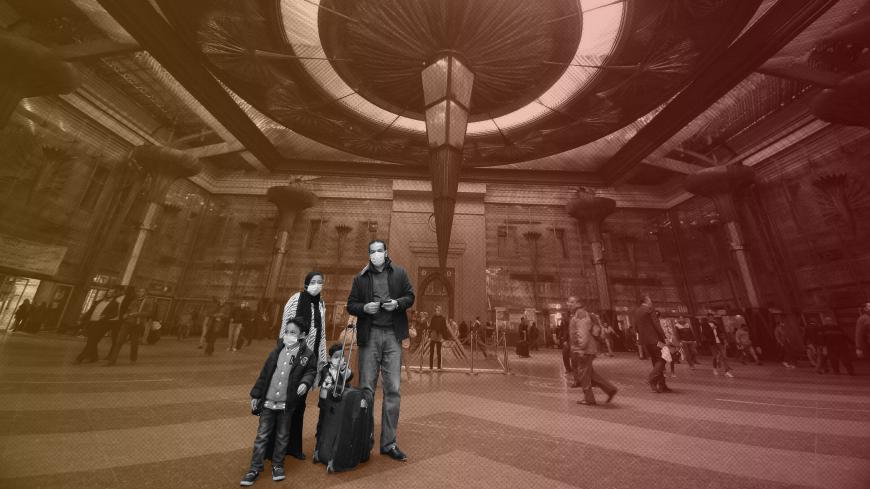 A family is seen wearing face masks, during the coronavirus pandemic, in the main train station of Cairo, Egypt, March 19, 2020. - Mohamed Shokry/picture alliance via Getty Images

To feed his wife and three daughters, Mahmoud Imam worked two jobs in Cairo — as an office assistant in the morning and a waiter in the afternoon. Now, as the Egyptian government enforces measures to prevent the spread of COVID-19, Imam is being forced to stay home.

For Imam, 35, this may be the opportunity to realize his dream of having a son.

“I used to spend over 12 hours at work, now I spend 24 hours at home. I suddenly found that I have three young naughty girls,” Imam told Al-Monitor.

“Children are a blessing," he said, "and I never had the opportunity to spend time with them. Now, my old dream of having a baby boy has come back.”

As Egypt's partial lockdown enters its third week, most people are either working from home or on paid — or unpaid — leave. Many couples are spending more time together, raising alarm among Egyptians that quarantine could lead to either a population surge or an increase in divorce, two issues Egypt has tried to address in recent years.

Though many interpret the Quran as rejecting birth control and encouraging procreation, the Egyptian government has long advocated family planning and encourages Egyptians to not have more than two children. Egypt, with a population of 100 million, is the most populous country in the Middle East. According to a UN report, the country’s population is expected to increase by 60 million within the next 30 years.

“I think lockdown will lead to more children, especially in rural areas," said Shaymaa Abdel Aziz, an Assiut-based Regional Council member. "In the present setting, there are no guests, no means of getting out, so people spend most of their time between four walls, eating and sleeping. There will definitely be an increase in population after nine months.”

“When we give a lecture on the population crisis, we bring along a sheikh [an Islamic scholar] with us to explain the issue," she said. "We want people to understand that family planning is good for them, as they should be giving appropriate time between each child for the health of the mother. We also tell them that fewer children enables families to look after their children better, both emotionally and financially.”

Abdel Aziz and other volunteers, who can no longer travel freely, now hold their sessions online.

“We use social media and do WhatsApp groups for people to provide them with reliable info and reach them easily,” she said.

However, Dr. Desiree Labib, the project manager of the family planning campaign Two Is Enough, run by the Ministry of Social Solidarity, told Al-Monitor that no one can predict the future.

“The population may increase … or it may not,” she said. “We can’t know for sure if the population will increase after nine months. But we do our best to make sure all contraception methods are available for women and all family planning health clinics are open and ready to help women, even during the partial lockdown.”

“We stopped our ‘knock-on-the-door awareness campaigns’ due to the lockdown," Labib said. "However, we are thinking about new ways to reach out to people.” She is concerned that online campaigns aren't the best outreach because the target group of Two Is Enough has a literacy rate of 62% and lacks access to computers.

Labib also added that the lockdown could make people psychologically averse to having more children due to financial and emotional insecurity.

According to recent reports, China, which was the first country to be hit by the coronavirus in December, has witnessed a spike in divorce rates, which officials say is linked to quarantine.

The Egyptian government has worked in recent years to lower divorce rates. According to a 2018 report by Egypt’s Central Agency for Public Mobilization and Statistics, one-fifth of marriages in Egypt end in divorce each year, and 40% of divorces occur within the first five years of marriage.

To help decrease divorce rates, the Ministry of Social Solidarity established the Mawada platform, which offers free anti-divorce courses. At the end of March, the ministry announced that the platform witnessed an increase of subscriptions by 225% during the lockdown, while visitors to the platform reached 280,000.

“Coronavirus lockdown could heal and repair damaged marriages and complicated relationships," said Hala Mansour, a professor of sociology at Ain Shams University. "Before lockdown, some couples felt estranged simply because they spent a lot of time with men at work and all the women busy with housework and children. This created problems between them. But now, people are obliged to stay at home. It’s time for them to understand each other.”

“In order to avoid problems in this period, partners should give each other personal space, even if they are in the same home,” Mansour added.

Egypt announced 120 new coronavirus cases April 3, raising the total toll to 985 documented infections and 66 deaths, with hints from officials that they could extend the lockdown.