Jordan is allowing people to drive their vehicles and many businesses to reopen for the first time in more than a month. 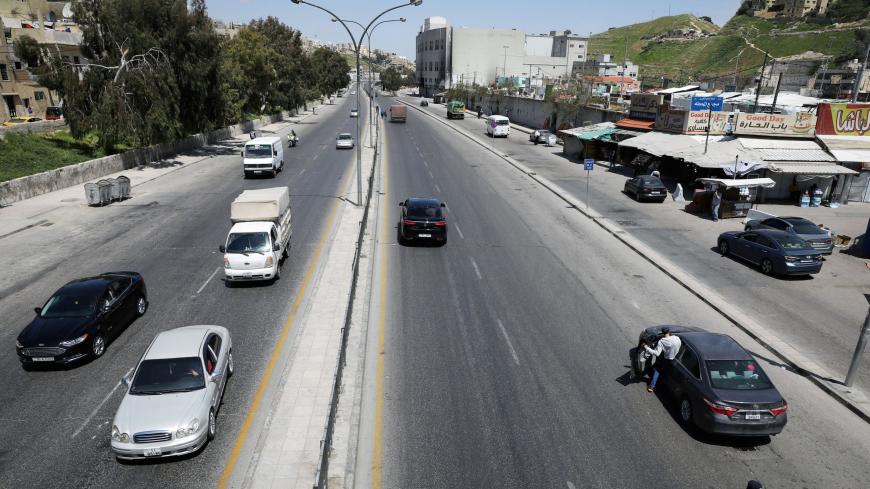 Jordanian police check the electronic passes amid concerns over the spread of the coronavirus disease (COVID-19), at a checkpoint in Amman, Jordan, April 8, 2020. - REUTERS/Muhammad Hamed

Jordan allowed people to freely move around and businesses to reopen on Monday as it relaxed its countrywide lockdown aimed at stopping the spread of the coronavirus.

One resident of the capital Amman said the decision was “brave,” but that Jordan’s fight with the virus may not be over.

“Only time will show if it will increase the spread of the virus or not, as some people are not taking safety measures seriously,” Ibrahim Rantissi told Al-Monitor.

The decisions allows people to drive around and businesses to reopen for the first time in more than a month. Jordanians can now drive their vehicles between 8 a.m. and 6 p.m. Barbershops, salons and dry cleaners are among the businesses that can now reopen. Public transportation and taxi services have resumed, but people using them must wear gloves and a face mask, according to a report from Reuters.

Rantissi said some normality has already returned to Amman.

“Life is gradually going back to normal,” he said. “People are doing lots of outdoor activities.”

One woman in Amman said she is happy there is still a limit on movement at night.

“Of course, my opinion is that this is right because there have been so many infections,” Dana About told Al-Monitor.

Jordan started one of the strictest lockdowns in the region in March. Non-essential businesses were closed, as were mosques, churches, the international airport in Amman and land borders. Gatherings of more than 10 people were prohibited and people could only go to nearby supermarkets and pharmacies. The military was sent to enforce the measures in many areas.

The government relaxed the lockdown in the southern port of Aqaba last week as part of a plan to reopen the economy. The closures have left many Jordanians unable to work.

Jordan’s air and land crossings remain closed. The country has 449 confirmed coronavirus cases, according to Reuters.