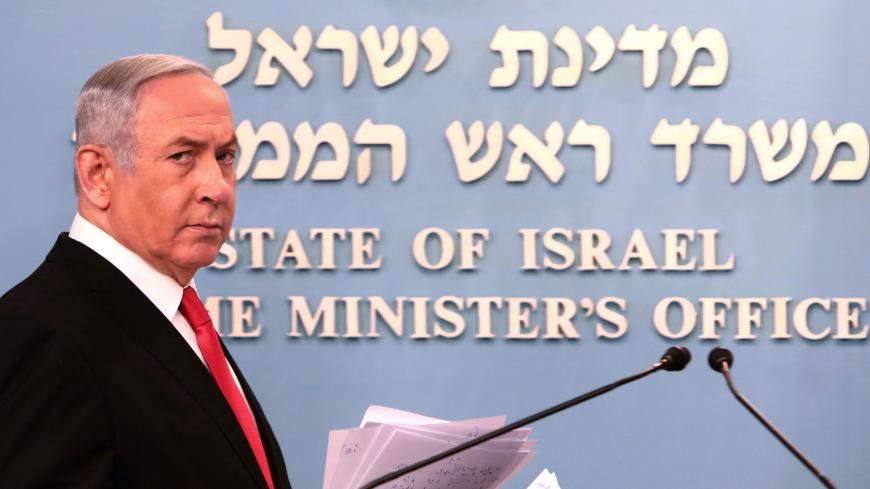 Israeli Prime Minister Benjamin Netanyahu arrives to make a speech regarding measures that will be taken to fight the coronavirus, Jerusalem, March 14, 2020. - Gali Tibbon/Pool via REUTERS

The Knesset Coronavirus Committee on April 7 handed in its intermediate conclusions, pointing out severe conceptual and organizational deficiencies in the process of preparing for the pandemic that was first announced Jan. 20, and in the management of the campaign to curb its spread.

The interim conclusions depict a disturbing picture of Prime Minister Benjamin Netanyahu managing the crisis almost on his own and alone, without any control by others over the decisions made by him. Even when making decisions of great consequences, Netanyahu consulted only a handful of experts, including mainly the director-generals of the ministries of Health and Finance. The committee argued that the prime minister should have established a coronavirus cabinet forum composed of the relevant ministers in order to make decisions of such magnitude and when faced with such a deep crisis. The committee also pointed out severe failures regarding explaining to the public the challenges faced by the country. Decision-makers exposed partial and unclear information, damaging the confidence of the public in the country’s leadership.

The Knesset’s committee verified claims over a lack of sufficient coronavirus test kits, noting that it is impossible to conclude for the moment whether the limited number of tests and the lack of adequate laboratories resulted in objection by the authorities to conduct large-scale testing, or whether this policy was motivated by professional reasons. It also noted that the director-general of the Health Ministry, Moshe Bar-Siman-Tov, admitted in his testimony that from the day China announced the outbreak of the pandemic and up until very recently, despite the lapse of time between this international news and the moment the virus reached Israel, the number of ventilators in hospitals remained almost unchanged.

As for testing, the committee stipulated a gap in preparation, stating that the Health Ministry didn’t act as expected of a body in charge in times of emergency. Israel’s Mossad and other bodies were tasked with purchasing the necessary material, though these bodies lack experience in health issues and are not really prepared for such missions. As a result, incomplete test kits were imported to Israel at a critical point in time.

On the issue of populations at risk, the committee concluded that authorities did not properly address homes for the elderly and other fragile groups in terms of protection or responses to special needs. Authorities also neglected the Arab public, as information on the virus was not made accessible in Arabic.

The Knesset Coronavirus Committee, headed by Yesh Atid legislator Ofer Shelah, held 15 meetings and heard 120 witnesses. Presenting the report, Shelah slammed Netanyahu, saying, "We need operative headquarters with authorities — a table regrouping representatives of all the ministries in all relevant fields. … Public diplomacy is not the prime minister on TV at 9 p.m.’’