Prime Minister Benjamin Netanyahu has no qualms about testing the boundaries of democracy as he manages the coronavirus crisis in a quasi-centralized fashion. 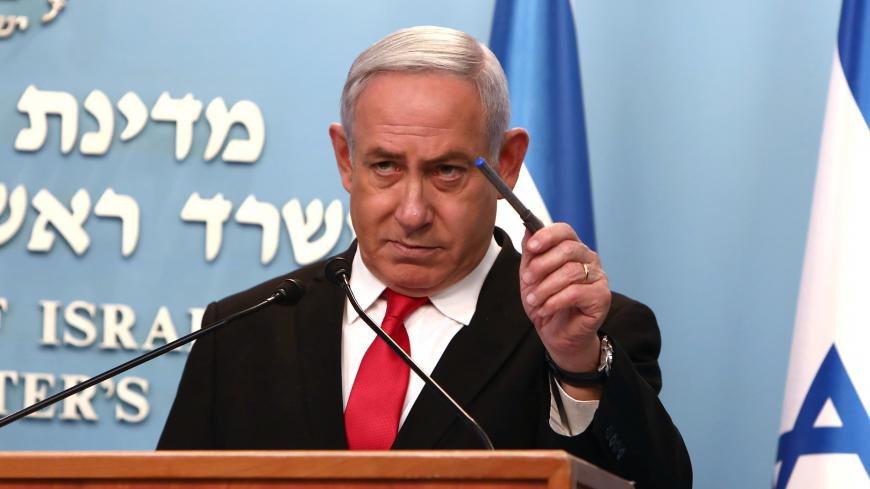 Israeli Prime Minister Benjamin Netanyahu gestures as he delivers a speech regarding the new measures that will be taken to fight the coronavirus, Jerusalem, March 14, 2020. - Gali Tibbon/Pool via REUTERS

The coronavirus crisis caught Israel with its political system at a prolonged impasse. Israel is currently ruled by an interim government endowed with limited authority, as it has been for the past 15 months, and its newly elected Knesset is barely functioning since being sworn in earlier this month.

Prime Minister Benjamin Netanyahu was quick off the mark in responding to the question of who should manage the coronavirus crisis. He surrounded himself with a team of advisers and close associates and started making decisions in what has turned into an almost one-man show. Sources well-versed in the decision-making process tell Al-Monitor that from the very start, the prime minister has been running a hub consisting of representatives from relevant government agencies, chief among them the ministries of Health and Finance.

On the side of the Ministry of Health, two people have the lead: Director-General Moshe Bar-Siman-Tov, an articulate economist who has become the public face of the crisis management, and head of Public Health Services Sigal Sadetzki, an expert in radiology and epidemiology. The ministry sets the professional tone in handling the crisis and is also the most hard-line agency in demanding radical steps to tackle it.

To Netanyahu’s credit, he is also open to hearing the views of former senior health officials, scientists and experts from other disciplines who are invited to internal discussions. For example, following the advice of external experts, Netanyahu decided to greatly increase COVID-19 testing, a policy the Ministry of Health was reluctant to adopt.

Finance Ministry officials also hold sway over Netanyahu in trying to minimize various lockdown measures to avoid a complete shutdown of the economy, arguing that the heavy economic toll is more severe than that of the epidemic.

One of the aides with the most influence over Netanyahu in this crisis is his national security adviser, Meir Ben-Shabat. The two enjoy a close relationship, and Ben-Shabat has become the uber crisis CEO, making tough decisions such as rejecting a proposal by Interior Minister Aryeh Deri to delay by a month the move to daylight saving time, which goes into effect on the night between March 27-28.

As mentioned, the professional teams around Netanyahu are the ones tasked with many crucial decisions. Netanyahu only convened the politicians — his government ministers — to obtain their required approval of legal measures, such as the adoption of emergency regulations. The few government sessions have been conducted by phone or video conference.

One of the ministers closest to Netanyahu tells Al-Monitor on condition of anonymity that the political chaos and the incumbency of an interim, transitional government allow Netanyahu greater control and leeway in decision-making than he would have enjoyed under normal circumstances. “To his credit, he hears different views and enables complex discussions,” said the minister. “However," the minister added, "his powers are far more extensive than those of a prime minister in a ‘regular’ government, perhaps also because of his strong personality. And maybe that’s a good thing. We are not in China where authorities have far greater powers, but a strong ability to govern is needed these days.”

Those not enamored of this approach are members of the political opposition who fought Netanyahu when he authorized the Shin Bet security agency to electronically track coronavirus carriers violating their self-isolation requirement or those who unwittingly came into contact with a known carrier. The Shin Bet, it should be recalled, is under the prime minister’s direct purview and oversight.

Knesset member Gabi Ashkenazi of the opposition Blue and White party, a popular former army chief of staff who headed the Foreign Affairs and Defense Committee in the previous Knesset, demanded an emergency discussion of the decision. However, Netanyahu authorized the surveillance even before the lawmakers had time to form a new Foreign Affairs and Defense Committee. Ashkenazi claims the government overstepped its authority, dubbing the move “political thievery.” In an interview with Israel's Channel 11, Ashkenazi argued, “It is unfitting that the use of such measures be approved in this manner without appropriate public and parliamentary oversight.”

At the same time, pressure has been exerted to hand over management of the crisis to the Israel Defense Forces (IDF) and other defense agencies. Defense Minister Naftali Bennett has been convening discussions with various teams and military forums, chief among them the Homefront Command, which is tasked with the protection of the population in times of war and other emergencies. He has also instructed top defense and security officials to be prepared for immediate activation. Bennett also calls press conferences every two to three days. In the latest one on March 25, he presented data contradicting senior Health Ministry officials, expressing indirect criticism over the government’s reluctance to declare an official state of emergency.

A senior Defense Ministry source told Al-Monitor that the National Emergency Management Authority is the agency authorized to deal with national crises, but it is unprepared and lacks real powers — yet another factor explaining the ease with which Netanyahu took over full control.

At a seminar on the coronavirus crisis and Israel’s national security held March 16 by the Institute of National Security Studies, one of the participants whose name was not noted argued that "the demand that the security system should participate in the civilian efforts against the coronavirus outbreak … may turn out to be mistaken due to the unknown duration of the epidemic, during which organizations will be diverted from their primary tasks.” In other words, the experts raised concerns that the preparedness of the IDF and other agencies to address regional threats could be impaired if they divert resources to handle the fight against the epidemic.

Former head of the National Security Council Maj. Gen. (res.) Giora Eiland tells Al-Monitor that Netanyahu is unwilling to hand over control to Bennett for political reasons alone, and harshly criticizes the handling of the crisis by the government and its leader. Netanyahu, he says, is wrong in appointing himself the sole arbitrator who knows everything and can deal with anything.

On the other hand, Netanyahu has won points for his frequent television appearances assuring the people that the management of the crisis is in reliable and capable hands, even if it entails tough, unpopular decisions. Is Netanyahu taking advantage of the political imbroglio to consolidate control and test the boundaries of democracy? It would appear so, but some argue that given the unprecedented emergency, that is exactly what the nation needs.