In secret diplomatic ties or in open posts on social media, Israel reaches out to Arab neighbors battling with the coronavirus. 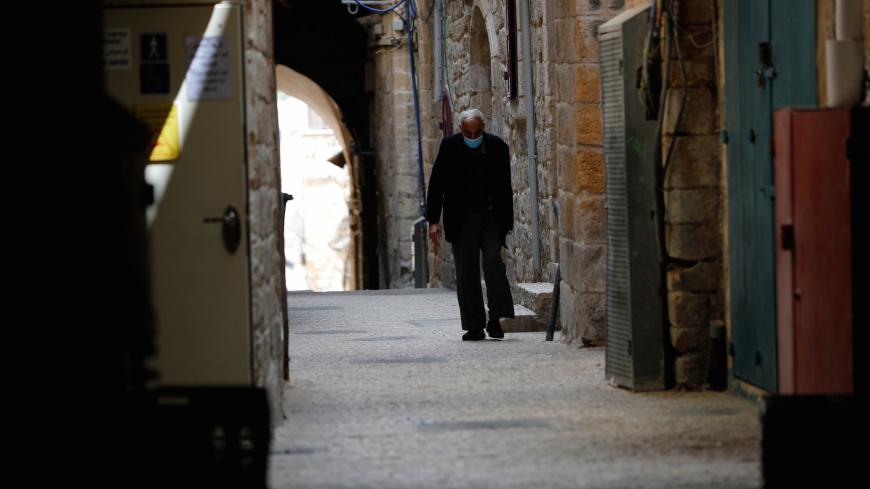 A man walks in an alley inside Jerusalem's Old City as shops are closed amid the coronavirus (COVID-19) outbreak, in the walled Old City, April 8, 2020. - REUTERS/Ammar Awad

In the multitude of headlines over anti-coronavirus masks being purchased by Israel across the globe, news about Israel donating 5,000 medical masks to Jordan drew little attention. Perhaps it was because the foreign and defense ministries kept it low-profile, informing simply that the Israel Defense Forces (IDF) will oversee the delivery of the medical gear. Still, discretion does not mean inaction.

Israel’s ambassador to Jordan, Amir Weissbrod, facilitated on March 26 the passage of some 200 Israeli Arab university students studying in Amman back to the country, after the Hashemite Kingdom closed movement across its borders. The latest news signals that even while engaged in a world battle over medical equipment — the last shipment of coronavirus test kits landed in Israel April 15 from South Korea — Israel does not forget its neighbor to the east.

Israel is obviously concerned about an outbreak in Gaza and, in this case as well, contacts are ongoing with another neighbor of Israel: Egypt. Israeli and Egyptian senior officials keep an open dialogue channel on the issue.

A recent incident in Morocco reveals another facade of Israel’s efforts vis-a-vis Arab countries amid the coronavirus crisis. Despite lack of formal relations, Israeli passports are accepted for entering Morocco. Reports on Feb. 3 suggested that Israel and the United States have been discussing a deal that would see the American administration recognize Moroccan sovereignty in Western Sahara. In exchange, Morocco would take steps to normalize relations with Israel. The deal did not materialize for the moment, but with positive sentiments prevailing, Morocco agreed to allow the evacuation of Israeli tourists from the country over the coronavirus.

Still, on April 16, Israeli media published that the exit of the Israeli tourists was blocked, after Israel and the United Arab Emirates agreed to evacuate both their citizens on a joint flight without first consulting with Rabat. Israel might have fallen victim here to unrelated regional tensions between two Arab players. That being said, the story exposes Israel’s ability to pull strings in one Arab country for moves in another.

And then there are efforts carried out on an entirely different level. Israel’s Foreign Ministry had published on its social media accounts a number of messages wishing Arab countries good health and success in the battle against the coronavirus — receiving positive reactions across the Arab world. A caricature uploaded on March 4 shows six persons — one Israeli and five from different Arab states — wearing masks and holding hands against the common coronavirus enemy. Internet users from Iraq, Morocco and even Saudi Arabia commented on these posts, hailing Israeli-Arab brotherhood. Some of them expressed thanks and even wished good health "to our cousins."

by Murielle KASPRZAK and Joseph SCHMID | AFP | May 26, 2022
END_OF_DOCUMENT_TOKEN_TO_BE_REPLACED