In a briefing, the Israeli Foreign Ministry praised cooperation with the Palestinian Authority in battling the coronavirus, but stressed that the Palestinians will need more help than Israel is able to provide. 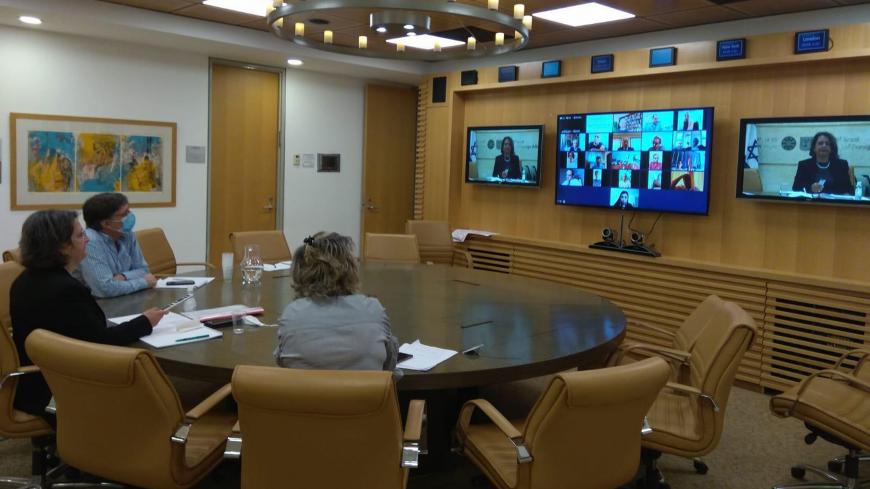 Israel’s Foreign Ministry briefed ambassadors stationed in the country March 31 on how Israel is assisting the Palestinians in their fight against the novel coronavirus. Deputy Director-General for Economic Affairs Yael Ravia-Zadok opened the online session by stating that Israel and the Palestinian Authority are in constant contact over efforts to thwart the spread of the virus. She pointed to a March 18 phone call between Israeli President Reuven Rivlin and Palestinian President Mahmoud Abbas in which the two men agreed to cooperate on the issue. Ravia-Zadok explained that Israel has been assisting the PA by offering West Bank hospitals medical equipment and cooperation between Israeli and Palestinian physicians, adding that Israel is also enabling the transfer of medical equipment to Gaza.

The online briefing included not only Foreign Ministry seniors but also international agents such as UN envoy to the region Nickolay Mladanov, the UN’s humanitarian coordinator Jamie McGoldrick and Norwegian Ambassador to Israel Jon Hansen Bauer, who acted as a representative of donor countries to the Palestinians.

The growing coordination and cooperation on efforts to battle the virus in the Palestinian territories received official recognition in recent UN reports. In its first COVID-19 Emergency Situation Report published on March 24, the UN Office for Coordinating Humanitarian Affairs (OCHA) — a body traditionally highly critical of Israel — hailed the Israeli and Palestinian authorities' "unprecedented cooperation on efforts aimed at containing the epidemic. Representatives from both ministries of health, as well as from Israel’s Coordinator for Government Activities in the Territories [COGAT] have been meeting on a regular basis to agree on matters of mutual concern."

Foreign Ministry spokesperson Lior Hayat told Al-Monitor that Israel has transferred significant quantities of medical materials to the Gaza Strip, including test kits, sanitation equipment and protective gear for health workers in addition to the equipment provided to the Strip by the World Health Organization.

As early as March 1, Finance Minister Moshe Kahlon contacted his Palestinian counterpart Shukri Bishara to address the economic impact of the epidemic on the Israeli and Palestinian economies. Since then, Israeli bodies led by the Foreign Ministry, the Finance Ministry and COGAT have intensified contacts with the Palestinian and international parties involved in facing the crisis.

But the Israeli Foreign Ministry did not allow its March 31 briefing to become a PR event, focusing on enhancing international coordination vis-à-vis the badly equipped Palestinian authorities and warning that Israel itself faces a hard struggle with the virus at home. Ravia-Zadok emphasized that the Palestinian Authority is responsible for fighting the virus both in the West Bank and Gaza and that the Palestinians would surely need more equipment and help than Israel is able to provide.

For Israel’s senior diplomats, the meeting was an occasion to call upon the international community not to forget the Palestinians in the crisis and not to lay the entire responsibility on Israel's shoulders. A senior Foreign Ministry official told Al-Monitor on condition of anonymity, "We really have here an opportunity to show that Israelis do seek peace and to express our solidarity with our neighbors, who surely won’t be able to confront this crisis on their own. Still, with Israel itself battling to get more masks and more ventilators, we would need the international community to work with us so we can also help the PA."

In their phone call, Rivlin told Abbas, “The whole world is dealing with a crisis that does not distinguish between who people are or where they live. Our cooperation is needed to ensure the safety of both Israelis and Palestinians."