In taking action to combat the coronavirus outbreak in Israel, Defense Minister Naftali Bennett has shown that he can be creative, determined and effective in using the military’s human and technological capabilities. 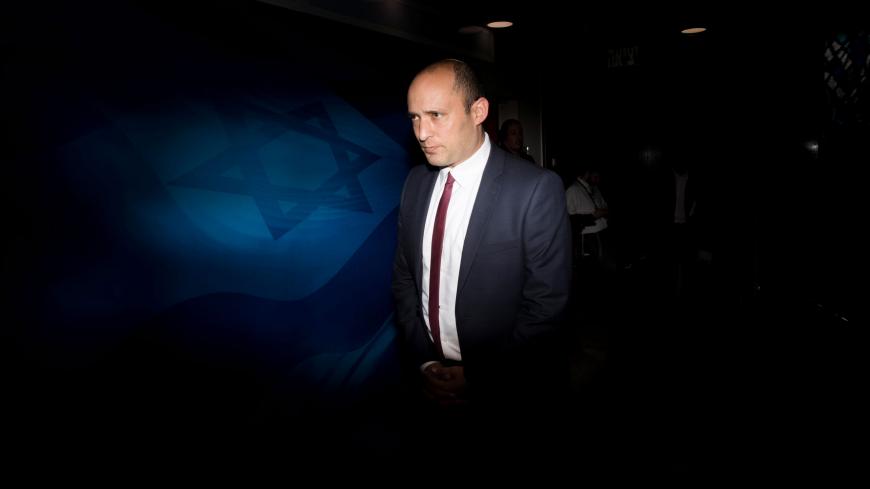 Prime Minister Benjamin Netanyahu appointed Naftali Bennett to the lofty position of defense minister last November, and on Feb. 10, in a moment of candor at a campaign event in the Jordan Valley, he revealed the reason for the appointment: to prevent Bennett from joining a government led by Blue and White Chairman Benny Gantz. “The Blue and White party almost had a government,” Netanyahu said. “I made the move at the very last minute and appointed him defense minister. That’s the truth.”

In the last few rounds of Israeli elections, Bennett had committed almost every mistake possible, making the Defense Ministry portfolio the springboard he needed to resuscitate his political standing. On more than one occasion, he has made surprising, populist decisions aimed at appeasing his right-wing base that have ultimately caused problems for Israel’s security if not put it at risk altogether. Examples include his decision to build a new Jewish neighborhood in Hebron, to collect the bodies of Palestinians killed launching attacks along the Gaza-Israel border for use as bargaining chips and to release from administrative detention a member of the Hilltop Youth who threw rocks at a car and injured the Palestinian driving it. “Bennett gives back to extremist right-wing activists and weakens security system in the field,” complained an unnamed senior member of the Shin Bet according to a Feb.12 news report.

Since the novel coronavirus outbreak, however, Bennett has proved that when he puts his political agenda aside and stops trying to accumulate “likes” on social media, he can be creative, determined and effective in using the military’s human and technological capabilities to achieve important national objectives. As defense minister, Bennett is in charge of the largest organizational machine in all of Israel. As an organization, the Israel Defense Forces rarely suffers from budget shortages. Within this context, Bennett has been shrewd enough to take advantage of the fact that over the years, successive government have disgracefully abandoned the Ministry of Health.

A report by the Taub Center for Social Policy Studies in Israel released last July revealed the number of hospital beds in Israel to be extremely low compared to that in other OECD member states. Israel has 2.2 general care hospital beds per 1,000 residents while other members have 3.6. The nations of Europe have 4.1 beds per thousand. This is just one example of how the Israeli health care system has been neglected. It also suffers from a constant shortage of medical equipment and staff. When it emerged that Israel was unprepared to conduct sufficient numbers of coronavirus tests, and it looked like the right hand had no idea what the left hand was doing, the minister of defense climbed to the top of the hill and yelled as loud as he could that the number of tests should be increased dramatically to stem the spread of the virus.

On April 1, Bennett demanded unequivocally that he be given extensive powers to deal with the crisis. He knows that the defense establishment has the best organizational apparatus in Israel and that full advantage should be taken of it in times of emergency. “The Ministry of Health has no real expertise in crisis management,” he said. “Managing tens of thousands of tests per day is not something they could do. If management of the coronavirus crisis is not transferred to the defense establishment immediately, we will not be able to return to normal! I’ve been soft-spoken about it until now, but it’s a matter of life and death!”

The enormous energy that Bennett has invested over the past few days to warn about blunders, deficiencies, and complacency within the emergency response system was met with scorn from Prime Minister Netanyahu, who has never hidden his animosity toward Bennett. When it comes to the rifts between Netanyahu, who wants to be seen as Israel’s National Defender of Health, and the unappreciated defense minister, Bennett has an important if not vital advantage: Once Bennett puts aside his settler-oriented political agenda, he is a person who gets things done. He thinks outside the box and is familiar with the rigid system. So, for example, he knows how to take advantage of the Research Department of Israeli Military Intelligence.

The Research Department is charged with analyzing information collected by the intelligence agencies operating on different fronts. Some of the best minds in Israeli intelligence head the department. They are the ones who provide the most up-to-date status reports to the defense establishment in general and decision-makers in particular. These include warnings and threats against Israel now and in the future. Bennett has put this system at the disposal of the health care system to help it collect and analyze data from other countries also dealing with the coronavirus. The working assumption is that people in intelligence have the ability and means to sift through data and respond to the queries of senior staff in the health care system.

This inter-ministerial cooperation was revealed by an army spokesperson not only to win the military admiration, but also to signal to the political leadership that the well-greased defense system has a lot to offer. The military can and does contribute well beyond deploying soldiers to patrol the streets to help the police enforce closure orders in towns and cities.

An unidentified senior officer in the Research Department who spoke to Ynet explained the advantages of using the Research Department. “The leaders of the health system came and told us that they were used to waiting a month, a month and a half even, for an answer to their queries, but when they asked us, we gave them an answer in ten minutes.” He went on to say that a joint center for the Ministry of Health and Military Intelligence had been set up in Sheba Hospital and is now operating as a war room in the battle against the coronavirus.

Last month frequent criticism was voiced about Israel’s readiness to deal with the COVID-19 pandemic. Questions about preparedness and neglect of the health care system are asked all the time, but overall, Israel appears to have prepared itself better than many other developed countries. Some of this can be attributed to Netanyahu’s rapid response to the crisis, regardless of whether he took advantage of the pandemic for his narrow political needs or acted because he was quick to grasp the pandemic’s full scope and intensity. Just as Netanyahu was able to transform himself from Mr. Security to Mr. Health, so did the man he scorns, Defense Minister Bennett.

Now that Health Minister Yaakov Litzman has been diagnosed with the coronavirus and is under quarantine in his home, Bennett has another once-in-a-lifetime opportunity to prove that he is a serious, efficient and creative minister and not just a lackey of his settler voter base.