Iran’s president once again projected a positive picture on his government’s response to the coronavirus pandemic, contradicting alarms raised by health officials. 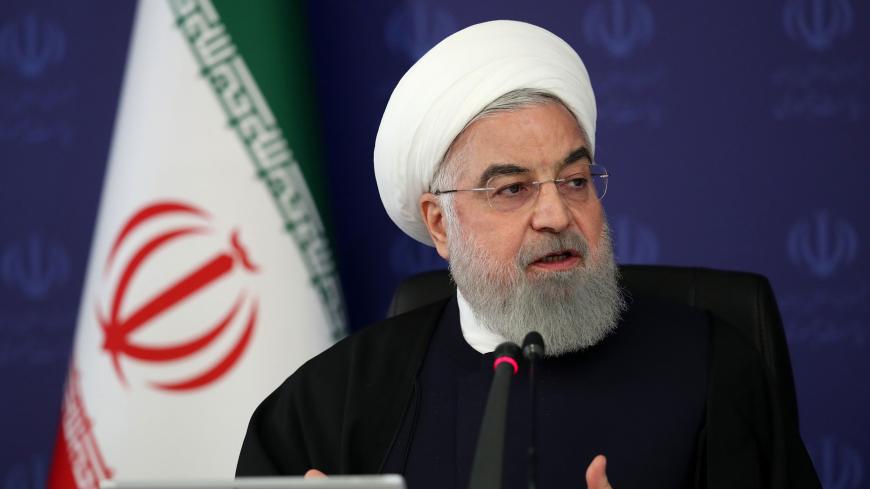 In his latest televised address on the fight against the coronavirus outbreak in Iran, President Hassan Rouhani defended his government’s handling of the crisis, arguing that the containment measures adopted in his country were more efficient than the “Chinese and European models.” Rouhani said the infection rate in “all provinces, without an exception, has witnessed a downward trend,” a sign that Iran is “on the right track.”

Those comments, however, sharply contrasted statements of serious caution from health officials closely battling the pandemic in hardest-hit areas, including the northern province of Gilan. Mohammad Hossein Ghorbani, the Health Ministry representative in the province, has raised the alarm on a “more severe wave of transmissions ahead.” According to Ghorbani, “given the fatigue inflicted upon the medical workers, the looming peak could be of more harmful consequences than before.” The official had already criticized the Rouhani government for refusing to introduce timely social distancing measures.

April 1 marked “Nature Day” in Iran, the last day of the Persian new year holidays popularly celebrated in the countryside and packed parks. But the coronavirus mood left no room for typical barbecue scenes and joyous moments of collective togetherness, which have passed on to Iranian generations from ancient times. To minimize the possibility of fresh cross-infections, Iranian authorities shut down all parks and resort areas across the country, imposing hefty fines on law breakers.

Acknowledging “people’s cooperation,” Rouhani also reassured Iranians of extra medical capacity, including thousands of intensive care unit beds, which he said remain unused. “Recently, we saw how the powerful and boastful countries faced difficulties tackling the coronavirus [outbreak]. But thanks to our nation, the good management and sacrifices made by our medical staff, the epidemic was not much of an issue for Iran.”

A detailed report from a community of Iranian medical workers has counted 80 deaths of medical workers, who had been exposed to the virus while treating patients in underequipped hospitals. As opposed to Rouhani’s assertions that sanctions have not hampered the normal medical operations, a group of Iranian doctors have launched an online petition, urging United Nations chief Antonio Guterres to push for a removal of “unjust” US sanctions, which have a “political nature” and are blamed for much of the slow response to the crisis that has killed 3,036 Iranians so far.

Echoing similar concerns, UN special rapporteur on the right to food Hilal Elver demanded that international economic restrictions against Iran and a few other countries be eased during the pandemic.

Those calls have grown louder in recent days, marked by tough exchanges between Iran’s Foreign Minister Mohammad Javad Zarif and American officials. Still, Zarif’s US counterpart Mike Pompeo appeared to have toned down the rhetoric in a Tuesday briefing that carried a less confrontational message, as he spoke of the possibility that the US government could “rethink” Iran sanctions to help it overcome the coronavirus outbreak.