Iran's IRGC doubles down on claims of coronavirus detection machine

The Islamic Revolutionary Guard Corps says it has invented a device to detect coronavirus yet has not provided evidence to back up the claim. 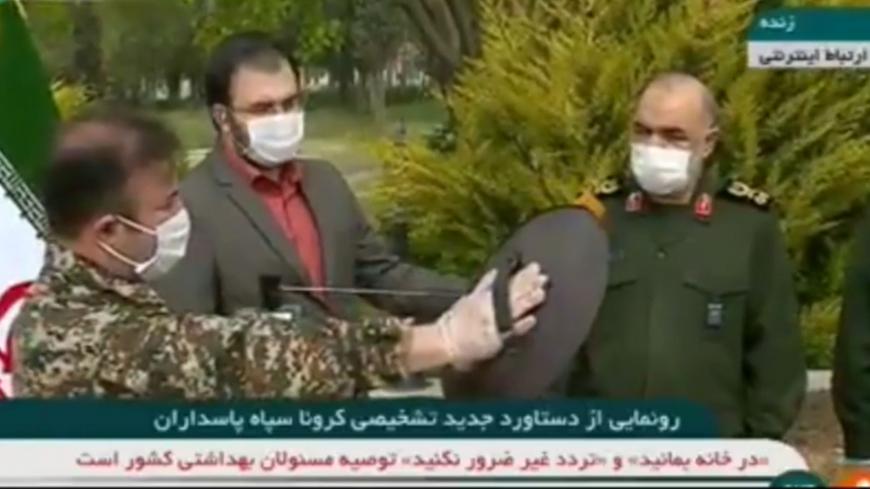 Islamic Revolutionary Guard Corps officers present what they claim is a machine able to detect coronavirus, seen in a still from a video recorded April 15, 2020. - (Fars News Agency)

The Islamic Revolutionary Guard Corps (IRGC) claims it has invented a device that can detect a person infected with the coronavirus from 100 meters away. Yet, after receiving criticism on the device's functionality, the IRGC doubled down on the device, insisting that it works.

The IRGC commander, Gen. Hossein Salami, told Tasnim News Agency that dozens of countries have contacted Iran about the machine, but it “would not be shared with the Americans until all sanctions are removed.”

IRGC spokesman Ramazan Sharif said, “Soon, the production process, technical features and capabilities” of the device will be shared with the media and experts. In response to the international criticism and mockery of the device, Sharif said that “Iranians take more pride and honor in causing the shock and anger of enemies and those who want ill for us.”

Salami unveiled the device April 15 on Iranian television. According to Salami, the device can detect an infected surface or individual in five seconds. Scientists working under the Basij designed the device, which uses a magnetic field and reportedly has an accuracy rate of 80%. Many critics, however, pointed out that the device resembles the fraudulent bomb detection wands, invented by a British businessman, that were used in Iraq at the height of suicide bombings.

The IRGC’s media campaign around the device may have been coordinated to upstage the administration, which has run the campaign to combat the coronavirus through the Health Ministry. Iran appears to have lowered the number of new coronavirus cases and deaths, in large part thanks to a national lockdown, though the figures remain high. Iran had 92 coronavirus-related deaths in the last 24 hours and 1,606 new cases, according to Health Ministry spokesman Kianoush Jahanpour. In total, Iran has had 77,995 cases and 4,869 deaths.

President Hassan Rouhani said April 16 that this will be a difficult year for “all the people of the world, but for us it will be more difficult.” The country, he said, will not only have to deal with the coronavirus but “also the virus of sanctions.” He added that government ministries and the private and public sector are working to alleviate the stress of the virus on the population.

Tehran is on lockdown, with only essential stores open. According to the Health Ministry, one-third of coronavirus-related deaths are taking place in Tehran. Iranian officials on the committee to combat the coronavirus have presented four conditions for partially reopening the economy: having enough hospital beds to absorb the sick once stores reopen; having enough testing capabilities to meet demand; being able to identify those who have been in contact with those who tested positive; and a declining infection rate.