Gaza: Love in the time of COVID-19

The requirement that Gaza residents go into quarantine upon returning to the territory has resulted in a number of people meeting their match. 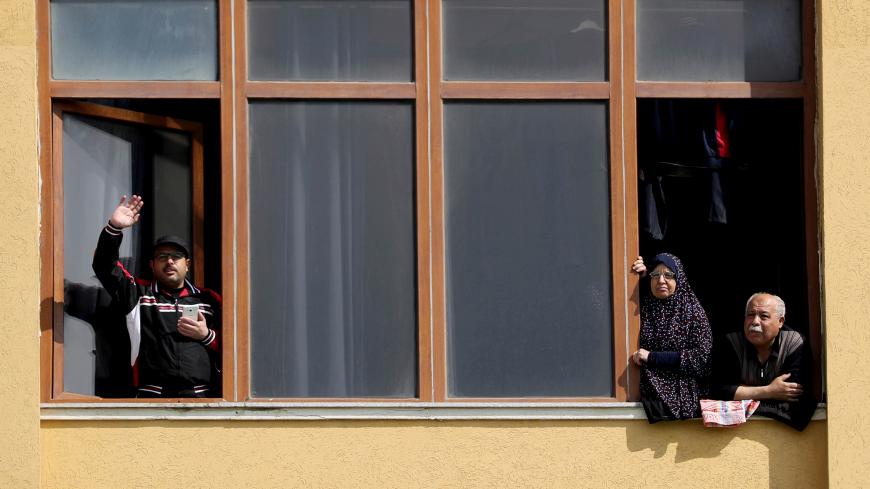 Palestinians quarantined at Al-Mathaf Hotel amid concerns about the spread of the novel coronavirus wave to their relatives in the northern Gaza Strip, April 15, 2020. - REUTERS/Mohammed Salem

GAZA CITY, Gaza Strip — Gaza residents have had to live with the isolation imposed on them by Israel's sea and land blockade for some 12 years now. Given this, they have been quick to adapt to the even more restricting circumstances stemming from the novel coronavirus outbreak.

The new virus has affected every part of the world, including areas without infections. In some countries, tens of thousands have died from COVID-19. The Hamas-controlled government in Gaza began taking measures to contain the outbreak of the coronavirus on March 15, among them a compulsory quarantine for everyone returning from abroad, housing them in public school buildings and private hotels. The Ministry of Health tests those in isolation after 19 days of confinement, unless someone presents with symptoms before that.

As of April 25, the World Health Organization reported 17 confirmed infections in Gaza, all of them in Gaza City. Ten people had recovered.

Preoccupied with the quarantine measures, Gazans have remained largely unaware of local love stories that have flourished in the time of COVID-19. These true stories bring to mind a passage from “Love in the Time of Cholera,” by Gabriel García Márquez: “Love was always love, anytime and anyplace, but it was more solid the closer it came to death.”

Nahla, not her real name, arrived in Gaza from Egypt on March 19, traveling with her father and brother. She initially resented the compulsory quarantine imposed on returnees.

“When I arrived in Gaza and learned that we would be subjected to medical isolation in a school, I was furious,” Nahla said. “But there was nothing I could do, so I had to accept reality.”

Nahla found being quarantined difficult. For one, the school was crowded. Though in “isolation,” she had no privacy, as she shared a room with four other people, making her fearful of catching the highly contagious coronavirus.

“Strict measures were imposed by the quarantine management. It was prohibited to wander around the school,” Nahla explained. “Men and women were not allowed to socialize freely, given the conservative views of some of the isolated returnees.”

One young man in particular caught Nahla's attention. He often asked her about her condition and whether she and her roommates needed anything. He searched for Nahla on Facebook and friended her.

“He asked about my roommates so as not to draw suspicions,” Nahla said. “Then, we started chatting more and more.”

With her father and her brother being isolated with her, the young man asked for her hand in marriage. Her father accepted, expressing his admiration for him.

“We got engaged on the 19th day of the isolation, after it was confirmed that we were COVID-19 free,” she said. “It was a double celebration.” The couple got married after leaving quarantine.

Rahaf, also a pseudonym, told Al-Monitor, “When I got to the quarantine center on March 25, I was really afraid of being infected. I tried as much as possible to take the utmost safety and security measures.”

Days after arriving from Egypt, Rahaf, a nurse, was socializing with some of her fellow quarantined Gazans. While listening to their stories and requests, which they relayed to the medical and security personnel, she noticed that a member of the security staff had a crush on her.

“He always asked about me and gave me his phone charger and cables,” she said. “He placed the internet router near my room.”

Rahaf liked him in return, adding that the care and attention he showed her made some of the women jealous.

“They said it was not acceptable to behave this way,” she said. “We became more careful not to get noticed in order to avoid criticism.”

While many Gazans in isolation have experienced stress and anxiety, for Rahaf it has been the opposite. “I wanted the isolation to continue for a longer period,” she remarked.

Rahaf was released April 14, but has maintained contact with the security officer through phone calls and on social media. Nothing is official between them, thus far.

Safa's story differs from Nahla and Rahaf's in that she had found love before her quarantine. She had gotten engaged a few days before traveling to Egypt with her mother on Feb. 25 to see family. Their visit wasn't supposed to last more than two weeks, but their return was delayed by the coronavirus crisis outbreak.

“We returned to Gaza on March 17,” Safa said. “My fiancé, Alaa, was waiting for me at the crossing, but the crossing administration prevented him from seeing me as a precautionary measure.”

“He didn't give up,” she continued. “He found out what school I was going to be confined in, and he waited for me there. I cried a lot when I saw him for just a few seconds, yet I felt happy to see him, and I was no longer afraid.”

Due to poor internet service, she was only able to talk to her fiancé in the evenings. Their conversations bothered some of her roommates who wanted to sleep. “Some of them sympathized and made me feel comfortable,” she said.

Safa revealed that some security officials who knew her story allowed Alaa to visit her once. She stood at the door of the school, and he stood more than six and a half feet away.

“We agreed that we would get married right after my quarantine and invite all the women who were isolated with me,” she said. “I would play a special song for them, and we would all dance together.”

Alaa told Al-Monitor that he had been scared for Safa, because she was isolated along with dozens of people who could have had the coronavirus. When she told him that her test had come back negative on the 19th day of her confinement, he felt that all that they had gone through had made their love even stronger.