In his announcement, Egypt's president cited “dangerous” conditions in the health and security sectors. 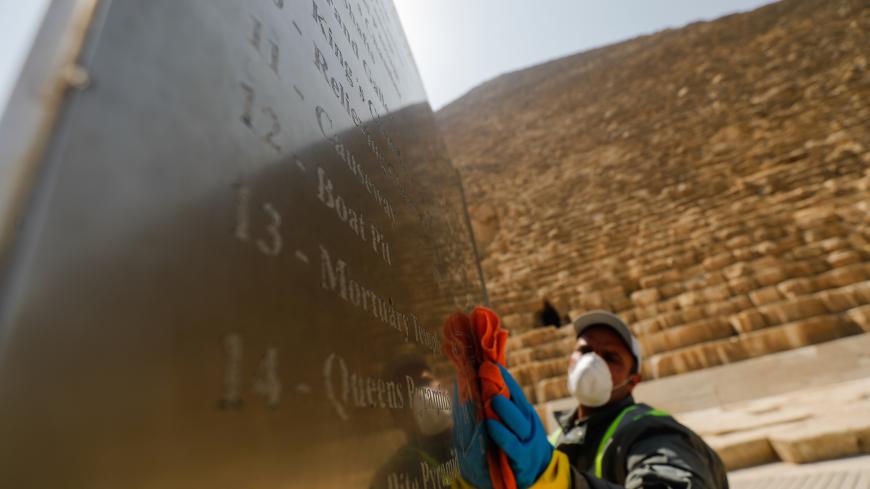 A member of the medical team sprays disinfectant as a precautionary move amid concerns over the coronavirus disease (COVID-19) outbreak at the Great Pyramids, Giza, on the outskirts of Cairo, Egypt, March 25, 2020. - REUTERS/Amr Abdallah Dalsh

Egypt has extended its state of emergency by three months to help authorities deal with both the threat of the coronavirus and insurgent activity in the Sinai region, the president said Monday.

"The armed forces and the police shall take all necessary measures to protect against terrorism, maintain security and safeguard public and private property as well as people's lives. Anyone who violates the orders will face imprisonment," read the announcement.

Renewed every three months, the state of emergency grants Egyptian security forces the power to make sweeping arrests and search homes without a warrant.

The Health Ministry today confirmed 22 more deaths from the coronavirus, bringing the death toll to 359. The total number of reported infections in the country of 100 million stands at 5,042.

Like many governments in the region, Egypt has recently eased some COVID-19 restrictions and increased freedom of movement during the holy month of Ramadan.

Egypt will allow malls and some shops to stay open until 5 p.m. on weekends. The nationwide curfew, which had begun at 8 p.m. each night, will now run from 9 p.m. until 6 a.m.

Prime Minister Mustafa Madbouly said the government will reevaluate in two weeks whether to keep the measures or tighten restrictions.

In March, Egypt closed its airports, dealing a massive blow to its tourism industry, which accounts for as much as 15% of the country’s gross domestic product. On Sunday, Madbouly said Egypt asked the International Monetary Fund for a one-year financial aid package to help shore up the economy amid the pandemic.

Under the Egyptian Constitution, presidential decisions to renew the state of emergency must be approved by the country's parliament.