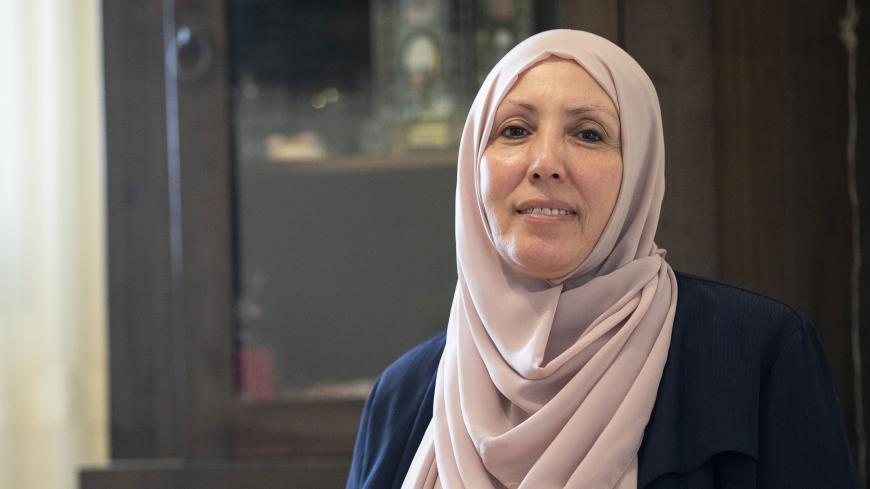 Women have not fared well in the recently instated Knesset. All the major parties are currently led by men. The number of women in the Knesset has decreased from 35 to 30, and women make up only 25% of the overall elected members of the Knesset.

Yet women in the Arab Joint List have done well: Out of the Joint List’s 15 members, four are women — double the two in the previous Knesset.

The Joint List is made up of four different parties running together as a bloc, and each party has one woman member.

Aida Touma-Sliman, 55, represents Hadash, the Communist Party. She studied psychology and Arabic literature at Haifa University, and was the founder of Women Against Violence, the first Arab feminist group against domestic violence. She also served editor-in-chief of al-Ittihad, the Communist Party’s Arabic-language newspaper.

Hadash focuses on creating a socialist economy and promoting workers’ rights. Touma-Sliman is the only one of the four women who served in the previous Knesset, where she was chairwoman of the Knesset Committee on the Status of Women and Gender Equality. A prominent opponent of the occupation, she has also made a name for herself as an outspoken, sometimes strident, champion of women’s rights, including those of Jewish ultra-Orthodox and religious Zionist women, even though she is an atheist.

“I may not know much about religion,” she told Al-Monitor, “but I know a lot about the patriarchy, so I support the rights of all women.”

Sandus Salech, 34, is the youngest member of the entire Knesset. She represents Ta’al, a secular party that focuses on social issues within Israel and the establishment of an independent Palestinian state. She holds a bachelor's in education and a master's in technology and education from the Technion. She has been a teacher and a CEO of a technology startup. Her academic research focuses on obstacles to the advancement of women in the technology field.

“Having four women is progress and a lever for advancing women in Arab society,” she told Al-Monitor, “but it isn’t enough. And I hope that the men won’t think that because we are four women, they won’t have to pay attention to women’s rights, because women’s rights are everyone’s rights.”

But most of the attention in the Israeli Hebrew press is on Iman Khatib-Yassin, 56, a member of the United Arab list, and Heba Yazbak, 35, a representative of far-left Balad, which believes that Israel should be “a state of all its citizens” and advocates the right of return for Palestinian refugees.

Khatib-Yassin holds a bachelor's in social work from Tel Aviv University and is a graduate of the prestigious Mandel Leadership Institute.

With a sigh, she acknowledges that she has gained attention as “the first hijab-wearing woman in the Knesset. … I wish people wouldn’t look just at the hijab, not only in the Knesset, but everywhere. All Arabs in Israel are stereotyped, but a woman wearing a hijab suffers from the difficult combination of national, religious and gender-based discrimination.

“I am not the first woman in the Knesset who wears a head covering. The press doesn’t make a big deal about observant Jewish women who cover their heads. I am very proud of my hijab, but underneath that hijab is a woman who wants to help her society. What is relevant is my political work.”

That political work, she said, is informed by her religious beliefs and her feminism. This means that she accepts, in sharp contrast to most secular feminists, that Israeli law recognizes only religious marriage. With regard to polygamy, permitted according to some interpretations of Sharia but criminalized by Israeli law, she demurred, saying, “I don’t want to get into it, but you can certainly understand from my response about marriage. I believe that religious law safeguards an individual’s status and rights.”

Heba Yazbak, 35, holds a doctoral degree in sociology and anthropology from Tel Aviv University and an undergraduate degree in social work.

In January 2020, Yazbak was disqualified from running in elections by Israel’s Central Elections Committee for “supporting terrorism,” based on a Facebook post in which she called Samir Kuntar a martyr and a fighter. An Israeli court convicted Kuntar, a Lebanese member of the Palestinian Liberation Movement and Hezbollah, of terrorism. He was later freed in a prisoner exchange then killed in Syria.

Israel’s High Court of Justice reinstated her. Yazbak said that the attempt to disqualify her was an “act of incitement against the Arab citizens in Israel, against Balad and against me as a Palestinian woman. The court gave a clear answer."

"If someone doesn’t want to listen to what I say — that I oppose violence, that I don’t support terror, that I believe in political action and that these are the reasons I have come to the Knesset — then they can believe the word of the court," she told Al-Monitor.

She acknowledged, however, that “starting off in the Knesset in this way adds personal complexity to an already complex situation. On the other hand, it has given me strength and has been an empowering experience. I feel as [a Knesset member] what every Arab feels — the hostility, the racism, the discrimination. And it motivates me to work even harder to improve the situation.”

She is now challenging the people who tried to disqualify her: “I say to them, ‘If you want to advance the values of equality for all, and if you have a democratic worldview, then come and work with me.’”

All four women are confident they will be able to work together, even though they represent different parties and ideologies.

Salech said, “The Arab population and Arab women are not monolithic, and the diversity among us reflects the full spectrum of our constituency. I think that gives us greater freedom to work together.”

Yazbak agreed, “I think that each of us will bring her uniqueness and also be part of a greater whole to benefit all Arab women and all women in this society. It will be interesting and challenging, and I believe that we will bring a different atmosphere to the Knesset.”

Even with regard to the issue of religion, on which their opinions are deeply divided, the Knesset members are confident they will be able to work together. Touma-Sliman said, “I’ve gotten along with religious men, and I’m sure that working with religious women will be easier! How religious someone is/isn’t important, but rather their level of commitment to women’s rights.”

“A religious person strives to be a better person, to uphold her values, and so I don’t think that my faith will prevent us from working together,” Khatib-Yassin added. “We are all speaking about the same issues, even if we don’t agree on all of the ways to reach them.”

Israel’s past three election campaigns have been particularly polarizing, with both of the larger parties focusing on the delegitimization of the Arab parties. Will the Knesset members from the Joint List be able to work with Jewish Knesset members, especially with the other women?

Touma-Sliman answered from her experience in the previous Knesset. “Let’s be honest," she said. "They didn’t want us, and we don’t really want them, either. But in the Knesset, you can’t advance important issues without generating a majority. Each time, on each specific issue, we generate a majority to work together. If we can agree on something to combat sexual harassment, then we will focus on that, for example. That’s just the way it is in politics.”

“The situation in the Knesset is very complex," Yazbak said. "We want to change the current situation, but we encounter a hostile, racist attitude from many of the [Knesset members] and much of the government. … At the same time, it is very important to advance the status of all women, and we will have to cooperate on specific issues, even with people who are hostile to us. It is very painful, but that is the way that politics has always worked.”