Erdogan turns to oil in a bid to salvage Syria policy

Turkey’s president eyes oil-related bargains in Syria after failing to achieve his stated objectives in Idlib and acquiescing to a new deal with Russia in the rebel stronghold. 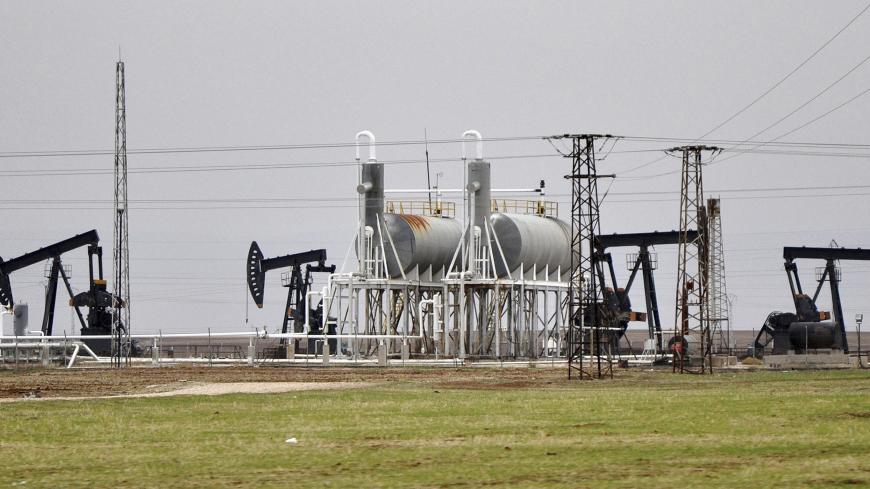 Fresh from a fruitless military intervention in Idlib, Turkish President Recep Tayyip Erdogan has pitched a proposal to Moscow to strip the Syrian Kurds of oil revenues and use the money to finance Turkish construction projects in Syria.

At his March 5 meeting with Russian President Vladimir Putin, Erdogan agreed to a deal that preserves the Syrian army’s gains in Idlib since January and calls for a security corridor stretching to a depth of 6 kilometers (about 4 miles) on either side of the key M4 highway. He has since revealed some intriguing details about his talks in Moscow.

Speaking to a group of journalists earlier this week, Erdogan said he had made a proposal to Putin to remove the control of oilfields in Qamishli and Deir ez-Zor from the Kurdish-led Syrian Democratic Forces (SDF), which Ankara views as a terrorist group, and use oil revenues to finance Turkey’s construction of housing projects in northern Syria.

“Qamishli is a place with oil reserves. So is Deir ez-Zor. Terrorists are exploiting the resources there. America has plans over the place and Putin has a plan over Qamishli,” Erdogan told journalists accompanying him on a flight back from Brussels. He continued, “I proposed Putin this: With the help of oil revenues generated there, we could assume the construction side, if you extend support in terms of financing. Let’s bring ruined Syria to its feet. And Putin said that this could be possible. I could make the same proposal to [US President Donald] Trump. Thanks to those resources, we have the possibility to reconstruct Syria instead of [letting] terrorists benefit from them.”

Referring to a phone call with Trump amid the escalation in Idlib in late February, Erdogan quoted the US president as saying that he was planning to withdraw American troops from Syria and did not wish to do “any big spending” there. “We are now on the wait,” Erdogan said.

Linking his Syria policy to the SDF or the Kurdish People’s Protection Units (YPG) and its political arm, the Democratic Union Party (PYD), helps Erdogan to both pressure his counterparts on the ground and suppress domestic questioning of Turkey’s military campaigns in Syria. The YPG and the PYD are seen as affiliates of the Kurdistan Workers Party (PKK), the armed group that has fought Ankara since 1984 and is listed as a terrorist group by Turkey and much of the international community. Turkey’s Euphrates Shield, Olive Branch and Peace Spring operations in Syria were justified as efforts to prevent a “Kurdish corridor” along the Turkish border, which was why they drew little objections at home. Yet, Turkey’s recent operation against the Syrian army in Idlib, which, many believe, has boiled down to assisting designated terrorist groups such as Hayat Tahrir al-Sham, has failed to convince not only the opposition, but reportedly also some quarters in the military. The campaign, dubbed Operation Spring Shield, has been openly criticized by a number of senior retired officers and fueled public questioning over the high number of Turkish casualties.

To smokescreen the flop in Idlib and revamp his Syrian venture, Erdogan has now turned to the issue of oil. In addition to the PKK-YPG argument, which aims to muzzle domestic critics, two other aspects stand out in his move. Erdogan, who has long prioritized the construction sector as a key driving force in the Turkish economy, is seemingly entertaining hopes to prop up the sector, badly hit by economic turmoil at home. Also, by raising the prospect of moving refugees from Turkey to housing in Syria, he hopes to placate and win over a domestic public that has grown increasingly frustrated with its Syrian “guests.”

Ahead of Operation Peace Spring in October, Erdogan had sought to sell a plan to move up to 2 million refugees to new settlements in a safe zone to the east of the Euphrates in northeastern Syria. Aiming at the return of 1 million refugees in its initial phase, the plan involved the construction of 140 villages and 10 towns to accommodate, respectively, 5,000 and 30,000 people each. The cost of a total of 200,000 housing units was estimated at some 151 billion Turkish liras or $26 billion at the time.

The initial phase of the plan directly targeted Kurdish areas, leading critics to charge that Ankara sought to “de-Kurdicize” border regions, redesign local demographics or create “an Arab belt” against “the Kurdish corridor.” Some Kurds even called it an attempt at “ethnic cleansing” or “genocide.”

Giving Turkey a share in Syria’s postwar reconstruction in return for Ankara cutting support for armed groups, ending the fighting and ultimately withdrawing its troops from Syria is a notion that Putin himself has tried to use to entice Erdogan. Yet Erdogan’s latest proposal targets the Kurds directly and looks like a recipe for renewed fighting. Such an approach threatens to undermine the Kurds’ dialogue with Moscow and Damascus as the Kurds seek to preserve the de facto self-rule they have established during the war. Last but not least, the proposal flouts the Syrian state’s sovereignty over its territories and energy resources, despite Erdogan’s repeated assertions that “unlike others” Turkey “has no eye” on Syria’s oil.

To press harder on his proposal, Erdogan appears to be awaiting the US withdrawal, hoping that Russian influence would somehow get Damascus to acquiesce. “The regime would not resist much to any instructions from Russia,” he said in comments on the viability of the latest Turkish-Russian deal in Idlib, reflecting how he views Putin’s influence over Syrian President Bashar al-Assad. The relationship between Moscow and Damascus, however, is rather different from how Erdogan imagines it to be.

Nevertheless, many believe Syria’s reconstruction process will be too costly, slow and difficult without Turkish involvement amid the ongoing sanctions on Syria. Partnership with Turkey in reconstruction projects is a “carrot” in Russia’s game plan and, indeed, Damascus might eventually acquiesce to it in return for the withdrawal of Turkish troops. The Assad government, however, has been trying to mend fences with Arab states, especially the Gulf monarchies, while arguing that Turkey’s policies threaten not only Syria but the whole Arab world. One of the aims of those efforts is to secure alternative financial resources.

There is no evidence or sign at present that the Syrian state could consent to a scenario where its oil revenues are funneled into construction projects lining Turkey’s pockets.

The Kurdish aspect of the matter is equally crucial. As long as the United States remains the guardian of the oil, neither Damascus nor any other actor can approach the oil wells. But if the US troops leave, the Kurds will find themselves in a very vulnerable position. Hence, the Kurds place importance on reaching a deal with Damascus before things come to that point — a deal that will seal the status of the SDF and self-rule institutions, including the sharing of oil revenues.

Syrian Kurdish sources told Al-Monitor that contacts with Damascus have yet to evolve into negotiations on fundamental matters. Similarly, no understanding has been reached on the issue of oil. The Kurds believe the Russians are playing the Kurdish card in a bid to keep Erdogan at the negotiating table. Many uncertainties continue to linger for the Kurds, but one question stands out: How could Russia win over the Kurds peacefully if it opens more room for Erdogan, who is seeking to undo all Kurdish gains? Moreover, despite his failure in Idlib, Erdogan has continued to reinforce the Turkish military presence in the area and sustained efforts to secure military support from NATO and Patriot missile defense systems from the United States.