Can Erdogan coax Assad into dialogue?

Hopeful that the Ukraine war will tip the scales to its favor in Syria, Turkey is taking escalatory steps on the ground on one hand and testing the diplomatic waters with Damascus on the other. 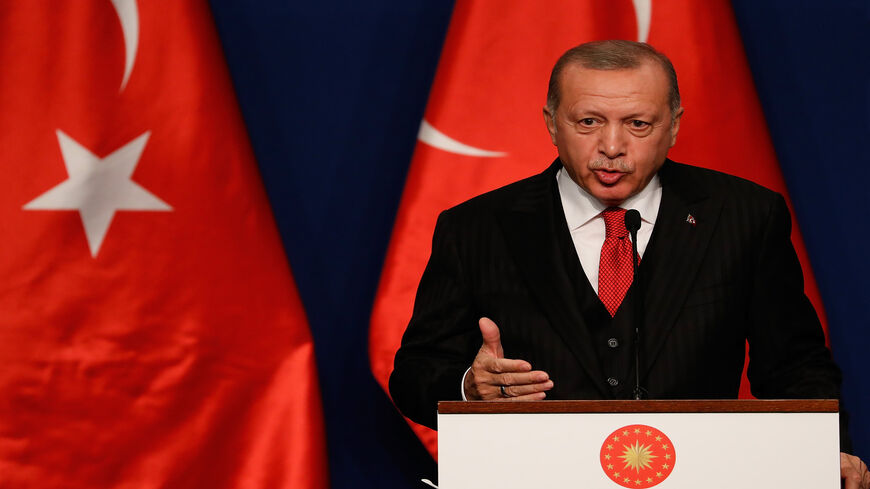 The Ukraine war has thawed Turkish President Recep Tayyip Erdogan’s chilly ties with his Western partners and halted the erosion in his popular support despite ongoing economic turmoil at home. Erdogan is hoping for gains also in Syria, counting on Russia’s preoccupation with Ukraine.

Amid decreased Russian activity in Syria, Turkey has taken escalatory steps — on the northeastern frontlines with the Kurds, in particular — and moved to reinforce its bases in Idlib, the northwestern province held by Islamist rebels.

More importantly, Erdogan has allegedly sent a message to Syrian President Bashar al-Assad in a bid to normalize ties. According to the government-controlled daily Hurriyet, which reported the claim April 4, government officials blame Russia and Iran for obstructing previous “opportunities for progress with Syria” and see a chance for “a new beginning” with Damascus, now that Russia is preoccupied with Ukraine, hoping to resolve the Syrian refugee issue and “the PKK problem” — a reference to the Kurdistan Workers Party, which Ankara designates as a terrorist group over its armed insurgency in Turkey and equates with the Syrian Kurdish groups seeking self-rule in northern Syria.

Turkish officials reportedly see Assad’s March visit to the United Arab Emirates (UAE) as a sign that he is seeking new openings and support. According to the report, “the government is discussing the initiation of dialogue with the Assad administration” on the basis of three main points: preserving Syria’s unitary structure, securing its territorial integrity and ensuring the safe return of refugees. Ankara communicated its priorities to Damascus before Assad’s trip to Abu Dhabi, hoping that its recent reconciliation with the UAE could help it turn a new page with Syria, which eventually could lead to the return of at least half of the Syrian refugees currently in Turkey, according to Hurriyet.

Yet this assessment ignores Damascus’ priorities, the Kurdish gains on the ground since 2011 and some essential factors underlying the Syrian crisis, and sounds rather naive in analyzing the positions of Russia and Iran. Ankara’s calculus rests on the assumptions that Moscow’s protection of Damascus will now weaken, that Iran will soften in Syria once it reaches a nuclear deal with the West and that Damascus, seeing its two main allies back down, will take up Ankara’s offer. Uniting around the goal of dismantling the Kurdish-led self-rule in northeastern Syria could herald a new beginning with Damascus, Ankara hopes.

And how does Damascus view Ankara’s proposal?

Syrian Foreign Ministry sources, quoted by the daily Al-Watan, played down Hurriyet’s report as “scandalous propaganda” aimed at burnishing Erdogan’s image ahead of elections next year. According to the sources, Damascus remains firm on its call on Erdogan “to respect international law, bilateral agreements and the principle of good neighborliness.” Thus, “Damascus cannot consider any dialogue with Erdogan's regime unless it first withdraws the Turkish forces illegally present on Syrian soil and ends its support for terrorists and repeated violations against Syrians,” the sources said, slamming Ankara’s intent to take advantage of the Ukraine war as “immoral” and “opportunistic.”

By emphasizing bilateral agreements, Damascus usually refers to the 1998 Adana accord on cooperation against the PKK, a 2011 agreement on jointly fighting terrorism, a 1987 protocol on sharing the waters of the Euphrates and several memoranda of 2009 on various issues, including water.

Damascus-based Syrian journalist Sarkis Kassargian believes the Syrian government has little incentive at present to seek reconciliation. “Emirati mediation might lead to rapprochement with Turkey, provided that it results in Emirati investments in Syria. But there can’t be normalization just for the sake of normalization. There is nothing Damascus could gain from such a move at present,” he told Al-Monitor. “Damascus is well aware that the refugee issue is a big problem for Erdogan. According to some assessments made here, Erdogan might even lose the elections if he fails to resolve this issue.”

The head of Turkey’s immigration agency said in late March that about half a million refugees had returned to safe zones in Syria, with 3.7 million Syrians still in Turkey.

Kassargian believes Damascus will never step back from its demand of Turkey to withdraw its troops from Syria and pull the plug on the Syrian National Army (SNA) and other rebel groups that Ankara has backed. “Damascus will not use the normalization card gratuitously. And those two conditions are the most important. Is Ankara ready to meet them? I don’t think so,” he said. The journalist noted there was no indication that normalization with Turkey was on Assad’s agenda in the UAE, which focused on economic cooperation, relations with Iran and Syria’s efforts to return to the Arab League.

The example set in Iraq leads many to believe that Turkey’s military presence in Syria will drag on. As part of cross-border military incursions in pursuit of PKK militants in northern Iraq since the 1990s, Turkey has continuously expanded its bases and areas of control in the region. In 2019, Russia had suggested reviving the Adana accord as a means to reestablish dialogue between Ankara and Damascus. Yet what Ankara understands from reviving the accord is the removal of the PKK-linked People’s Protection Units (YPG) and the YPG-led Syrian Democratic Forces (SDF), while Damascus believes the accord should apply to all armed opposition forces in Syria.

According to the pan-Arab daily Asharq al-Awsat, concerns have grown in Damascus that the support it receives from Moscow — not only in military and political terms but also in the form of oil and grain supplies — could weaken amid a protracted war in Ukraine and Russia’s international isolation. So, Assad’s trip to the UAE reflected his quest for alternative channels of support. The emerging Arab-Israeli security alignment against Iran is seen as another major shift that Damascus should take into account. And accepting Syria back to the Arab League, the argument goes, will be instrumental in curbing Iranian influence in the region.

That Damascus could distance itself from Tehran is, essentially, wishful thinking. The Iranians are likely to quickly fill any vacuum left by the Russians. They have already deployed militia reinforcements to about 120 military positions and bases in Homs, Hama, Raqqa, Deir ez-Zor and Aleppo, according to media reports.

Turkey, for its part, has been targeting Kurdish positions in Ain Issa and Tell Tamir along the crucial M4 highway as well as in Manbij and the Aleppo countryside. A leader of the Syriac Military Council was injured in a Turkish drone attack in early April. Turkey has been deploying reinforcements, too. On April 3, a military convoy of 90 vehicles crossed to Idlib, heading to the Turkish outposts in al-Mastuma and the Taftanaz air base.

Though a large-scale offensive is unlikely, Turkey is apparently planning to turn up pressure on the Kurds. Last fall, Ankara had tested the waters for a fresh offensive to the east of the Euphrates, but neither Russia nor the United States gave it a greenlight. Now that Turkey’s role as a NATO member is important for Washington in the Ukraine crisis, Ankara expects the Biden administration to turn a blind eye to a certain degree of Turkish military activity, buoyed by the administration’s letter to Congress backing Turkey’s request to buy F-16 jets and the launch of a “strategic mechanism” of dialogue during Undersecretary of State Victoria Nuland’s visit to Ankara this month. Yet such Turkish expectations clash with Washington’s intent to increase its military, political and financial involvement in northeastern Syria in a bid to make things harder for Russia. Biden has already requested fresh funds to support the SDF in the 2023 budget.

The Ukraine war has energized the Syrian opposition as well. Syrian National Coalition members close to Qatar see the war as an opportunity to rekindle “the revolution” — a position that meshes with Washington’s goal of keeping Russia under pressure — but Turkey is determined to keep opposition forces within the confines of its own agenda.

Ankara has sought to preserve the status quo in Idlib without coming to loggerheads with Russia, while steering the fighting to Kurdish areas. As part of this strategy, it has advanced cooperation with Hayat Tahrir al-Sham (HTS), the jihadi outfit controlling Idlib, despite its commitment to eradicate the group in two separate deals with Russia. Similarly, Turkey has encouraged rapprochement between its SNA allies and HTS. Opposition forces are disturbed by this strategy, although they are reticent to speak out as they rely on Turkish assistance.

Damascus, for its part, has no intention to allow the opposition to ride the tailwinds of the Ukraine crisis and turn the tide. The Syrian army has intensified operations in Idlib and Russia has been reminding of its presence with air raids on both the eastern and northwestern fronts.

In sum, Ankara’s calculus on reconciliation with Damascus rests on conditions such as Russia becoming unable to take care of Syria, Iran losing its influence over Damascus and the United States selling the Kurds out, which are nothing more than wishful thinking. For Damascus, Turkey’s withdrawal from Syria is a crucial threshold for dialogue. The possibility of Erdogan losing the 2023 elections appears to be also factored in in Syrian assessments.