Having failed to deliver on his ultimatum to the Assad regime, Erdogan now has a serious credibility problem domestically. 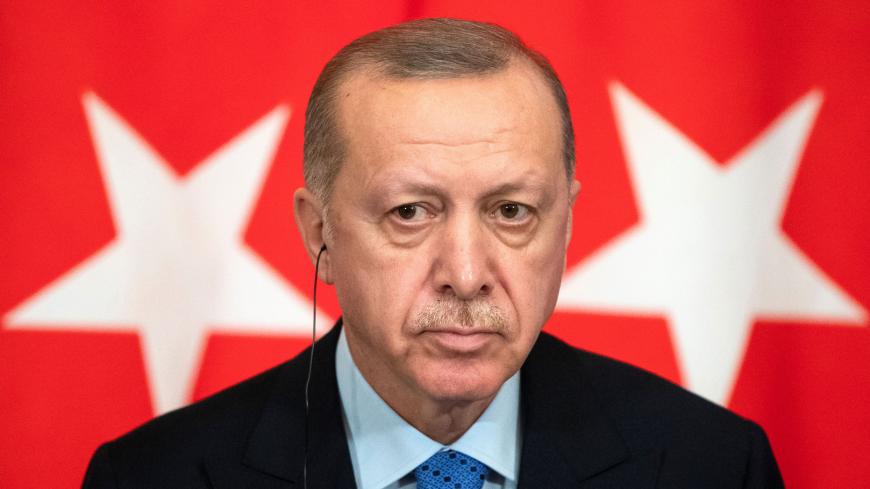 Having returned from Moscow last week with less than half a victory in Idlib, President Recep Tayyip Erdogan now faces an uphill battle domestically where the results of his talks with Russian President Vladimir Putin are proving to be a hard sell to the public.

The pro-government media’s efforts to bolster Erdogan's position with banner headlines and commentary about his great success are failing to convince a wary public.

Turks are increasingly concerned about their country’s involvement in Syria and the lack of any apparent forward-looking strategy or honorable exit plan, should things start going seriously wrong there.

The concern is amplified by the killing of over 50 Turkish soldiers by the Syrian regime and the Russian air force since Erdogan ordered the Spring Shield Operation in Idlib in late February.

That Erdogan is now seeking support from the United States and Europe is also contributing to his negative image, since this highlights Ankara's weak hand in Syria. Many recall Erdogan’s keenness in developing ties with Russia to reduce Turkey’s dependence on the West.

Erdogan was in Brussels earlier this week for talks with NATO Secretary-General Jens Stoltenberg and the presidents of the EU Commission and European Council, Ursula von der Leyen and Charles Michel.

Press reports indicate that the talks with the senior EU officials were conducted in a tense atmosphere with little being achieved.

Erdogan’s demand for added financial support from the EU to help Turkey cope with its burgeoning Syrian refugee problem was reportedly met with a counter demand. The EU, in turn, is calling for a revision of Ankara’s current policy of letting refugees cross freely into Europe through Greece and Bulgaria.

Erdogan’s talks with Stoltenberg also produced little more than commonplace words of moral support from NATO for Turkey’s efforts to defend itself against threats emanating from Syria. This support has yet to translate into anything concrete.

Ankara’s request from Washington for Patriot missiles to be deployed along the Syrian border, to help protect the Turkish military in Idlib, has also not been met.

While returning from Brussels, Erdogan told reporters on his plane that there was a “softening” on the American side on this score. He was referring to Washington’s demand that Ankara revoke its decision to purchase Russian S-400 missiles before it can purchase Patriot missiles. The United States says the S-400 poses a threat to its military assets in Turkey.

Erdogan has refused to do so thus far and there is no indication that he will or can do it given the binding agreement Turkey signed with Moscow.

Washington wasted no time in replying to Erdogan’s claim of a “softening” on its part on the S-400 issue. ABC News’ Elizabeth McLaughlin quoted Pentagon spokesman Jonathan Rath Hoffman over her Twitter account March 10, "Turkey is not going to receive a Patriot battery unless it returns the S-400."

Words to that effect were also uttered by Washington’s Syria envoy James Jeffrey and the US Ambassador in Ankara David Satterfield.

Erdogan has now pinned his hopes on a meeting he will host next week in Istanbul with German Chancellor Angela Merkel and French President Emmanuel Macron. He also hopes that British Prime Minister Boris Johnson will join the meeting.

Analysts believe that while that summit may produce some palliative results regarding the refugee problem, a major breakthrough that comes anywhere close to what Erdogan expects from Europe is unlikely.

The shaky cease-fire that Erdogan secured in Moscow is the only aspect of his talks with Putin that provided relief to the public at home because it prevents — at least for now — the possibility of more Turkish casualties.

Even Erdogan is admitting, however, that the cease-fire is fragile. Ankara and Moscow are already reporting violations by the other side, although these have not been sufficient to undermine the “Moscow Accord” yet.

Nevertheless, Fox TV’s popular anchor Fatih Portakal, whose nightly bulletin is among the most watched news programs in Turkey, believes that these early reports of cease-fire violations point to a fresh crisis brewing between Ankara and Moscow.

Portakal has been scathing in his commentary on the results of the Moscow talks. Following the talks, he provided detailed maps showing what Erdogan promised before traveling to Moscow and what he came back with.

Erdogan issued an ultimatum in February demanding that the regime pull its forces back to the cease-fire lines agreed on with Putin in Sochi in September 2018, saying that if it didn’t, Turkey would force it to do so.

Erdogan’s warning was particularly important because a number of Turkish military observation posts in Idlib have been left behind regime lines following the Syrian army’s advance in Idlib with Russian air support.

These observation posts were set up in 2017 under an accord with Russia to monitor a cease-fire that ultimately failed.

Portakal pointed out that Erdogan’s ultimatum to Assad fell flat on its face in Moscow.

Veteran political commentator Taha Akyol underlined the impossibility of Erdogan delivering an “Ottoman slap” (a debilitating blow) to Putin, as some pro-government commentators had hoped.

“When we compare the balance of power between Russia and Turkey and the distribution of forces in Syria, it is clear this is not possible,” Akyol wrote in the daily Karar.

The most scorching criticism of Erdogan’s failure in Moscow, however, came from Meral Aksener, the leader of the nationalist Good Party.

Aksener said that Turkish soldiers were putting their lives on the line in Idlib for the sake of their country while Erdogan was “setting sail for fresh examples of incompetence.”

“The winners in Moscow are Russia and Assad. We are the side that stepped back,” Aksener said in a speech to Good Party deputies in parliament March 10.

“When you traveled to Moscow, we expected only one thing from you,” Aksener said, addressing Erdogan. “That was that you be as honorable as our soldiers that have put their lives on the line. But you went there and did not display even a tenth of that honor at the table.”

It is generally agreed that the Turkish military, despite its losses, proved its mettle in Idlib against the Syrian army with its might and its modern military capabilities.

But without a coherent political strategy for Syria or a face-saving exit plan should things start going seriously wrong on the ground, the success of the Turkish military has not been sufficient to assuage lingering concerns.

There is also uncertainty as to how Ankara plans to honor its commitment in Moscow to weed out and neutralize radical Islamist elements among the opposition fighters it supports in Idlib, most notably the jihadis from Hayat Tahrir al-Sham.

In the meantime, unfavorable images continue to flow from Moscow for Erdogan, days after his talks with Putin. Earlier this week, the state-owned Russia-1 channel showed him and his high-level delegation of ministers being kept waiting at Putin’s door.

A chronometer was placed in the footage to show that the delegation waited two seemingly unending minutes, during which a bemused Erdogan eventually gets tired and sits down.

The Turkish side later explained that this was Putin’s habit and that the record for waiting for Putin belonged to Merkel. There was no explanation, however, as to why an official Russian channel should post this video, knowing full well that it would embarrass Erdogan at home.

The bottom line: The period of chummy camaraderie between Erdogan and Putin is over.

Addressing the members of his Justice and Development Party (AKP) in parliament March 11, Erdogan warned that if the Idlib cease-fire collapses, the Turkish army will push on against the regime with even greater force to secure its objectives.

Having failed to deliver on his previous ultimatum to the Assad regime, Erdogan now faces a serious credibility problem at home with regard to such warnings.