Police detained nine human rights lawyers in the mainly Kurdish provinces of Urfa and Diyarbakir on March 12 in what rights groups say is part of an ongoing pressure campaign aimed at covering up abuse in police custody. 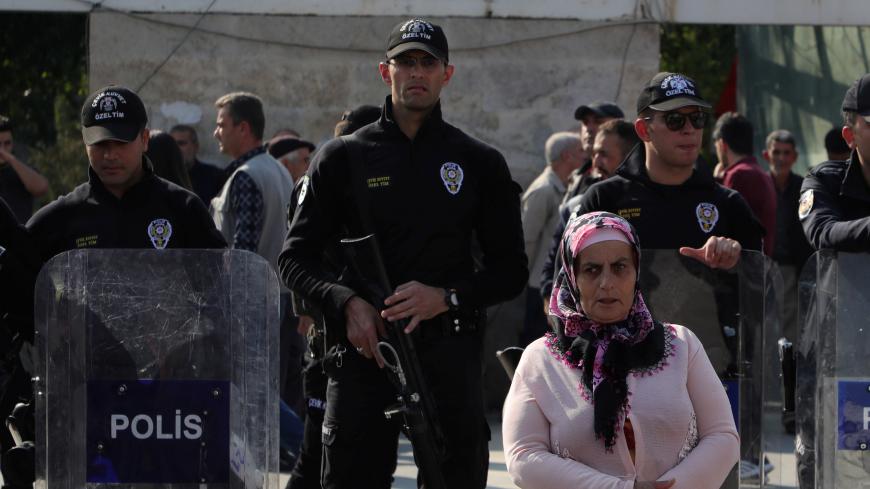 Riot police stand guard as the supporters of the pro-Kurdish Peoples Democratic Party gather to protest the detention of their local politicians in Diyarbakir, Turkey, Oct. 25, 2019. - REUTERS/Sertac Kayar

At least nine lawyers were detained on terror charges in early morning raids in the mainly Kurdish provinces of Urfa and Diyarbakir today, part of an ongoing campaign of repression targeting human rights defenders, said Abdullah Oncel, the president of the Urfa Bar Association.

Seven of the lawyers were detained in Urfa and two others in Diyarbakir. Three others — all from Diyarbakir — are being sought, Oncel told Al-Monitor. Several of the lawyers’ offices were ransacked by police and their homes raided, he added.

Bunyamin Seker, co-chair of the Jurists for Freedom Association, said a fourth lawyer from Sirnak, a heavily Kurdish province on the Iraqi border, was also being sought in connection with the case that is being overseen by the chief prosecutor of Urfa.

“We have been unable to find out the details or the exact reasoning of this operation but it’s obvious to us that with respect to lawyers, it’s to do with their work on abuses, particularly those that occur inside prison,” he told Al-Monitor. Another 12 individuals, none of them lawyers, are also believed to be facing charges in the case but their identities remain unknown and it remains unclear whether any have been detained, Seker said.

A secrecy order has been slapped on the investigation. The lawyers are thought to be accused of aiding and abetting the outlawed Kurdistan Workers Party (PKK), a rebel group that is waging an armed campaign for political autonomy and is classified as a terror group by Turkey, the EU and the United States.

The charge is liberally dispensed to lock up anyone who demands greater rights for the country’s 14 million or so Kurds. They include dozens of democratically elected Kurdish officials, among them Selcuk Mizrakli, the mayor of Diyarbakir, ousted from office in October and jailed.

Mizrakli, who was elected with 63% of the vote in March 2019, was sentenced to nine years, four months and 15 days on Monday on thinly evidenced charges of “membership of a terrorist organization.”

Oncel denied any of the detained lawyers were connected with the PKK. “These are men and women dedicated to defending human rights and recording abuses. They are a constant thorn in the side of authorities who want to cover them up,” he said.

Torture under detention including sexual abuse, beatings and electric shocks has been on the rise since the failed July 2016 coup, rights groups say.

One of the detained lawyers, Sevda Celikol Bingol, was among a group of 11 lawyers who documented the cases of some 54 men, women and children who were rounded up in Urfa’s Halfeti district and tortured after a policeman died in a clash there with PKK rebels.

Coming during the Ramadan fast, photos of the detainees lying on the ground, face down with their hands cuffed behind them as soldiers stood over them, provoked an outcry. The president of the Diyarbakir Bar Association, Cihan Aydin, likened the scene to Auschwitz, Gaza and Abu Ghraib in a tweet.

“There were boot marks on their backs,” Oncel said. Authorities are still investigating a criminal complaint filed against the perpetrators.

Bingol was also representing the family of four men who were killed in a feud with the tribe of Ibrahim Halil Yildiz, a lawmaker for Urfa from President Recep Tayyip Erdogan’s Justice and Development Party. Yildiz made headlines last week when he broke his hand during a fistfight in the parliament that erupted when an opposition lawmaker criticized Erdogan’s Syria policy.

At least two more of the lawyers detained in today’s sweep have already served jail time on terrorism charges. They include Emin Baran, who practices in Urfa’s township of Suruc, where the Islamic State carried out a 2015 bomb attack that killed 33 young activists. They had been planning to help rebuild the Syrian Kurdish town of Kobani that was wrecked by the jihadis during a months-long siege. Baran spent two years in pre-trial detention in 2016-2019, Oncel said.

“The police have had Baran in their sights before. He was unjustly accused of terrorist propaganda,” said Emma Sinclair-Webb, Turkey director for Human Rights Watch. The New York-based advocacy group published a 56-page report in April 2019, cataloging what it called the systematic abusive detention and prosecution of human rights lawyers in Turkey since July 2016.

“It's part of a pattern of targeting lawyers for discharging their professional duties, resulting in an erosion of the right to defense [and] a violation of fair trial. They get accused of the same crimes of the people they sometimes represent,” she told Al-Monitor.

“And Urfa has a very bad record of abuses over a long time.”