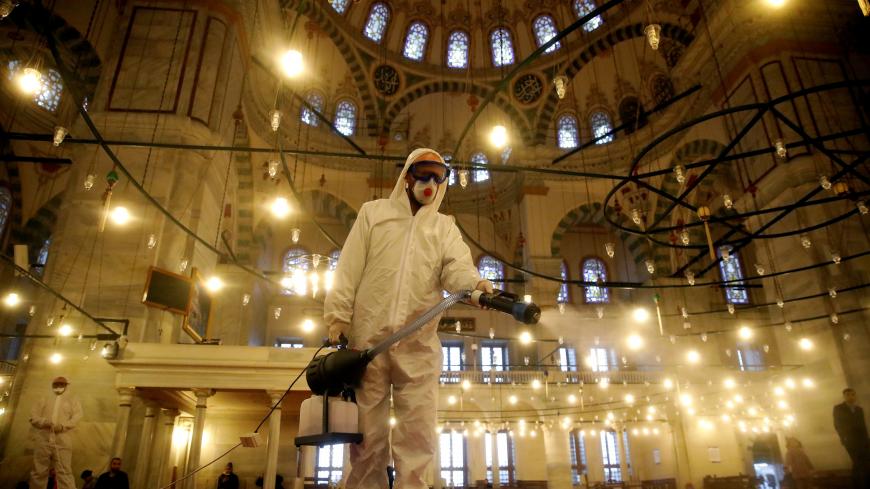 A worker in a protective suit disinfects the Fatih Mosque in Istanbul, Turkey, March 14, 2020. - REUTERS/Umit Bektas

ISTANBUL — The number of confirmed coronavirus cases in Turkey tripled overnight to 18 on Monday, and the government ushered in a slate of restrictions to curb the spread of the pandemic that has enveloped much of the world.

Health Minister Fahrettin Koca tweeted overnight that Turkey had 12 more cases of the novel coronavirus, including seven people who had traveled from European countries and three from the United States. At least six people have been infected by a man coming from Europe who had the country’s first diagnosis less than a week ago.

The indefinite closure of bars and nightclubs began on Monday, and was rapidly followed with another decree shuttering dozens of public spaces, from theaters to tea gardens, pools and baths, in a dramatic bid to prevent large groups from gathering and spreading the virus. Schools are shut for two weeks, and dormitories are being emptied to serve as potential quarantine centers.

Courts have postponed trial hearings except for emergencies or to decide on arrest warrants and visits to the nation’s prison population of some 282,000 people have been halted, the justice minister said. Spectators are banned from football matches and libraries, art galleries and driving schools are all closing.

Turkey has seen no fatalities from the virus so far, and its infection numbers lag behind those of smaller European and Middle Eastern neighbors. Nearly 170,000 cases of coronavirus disease, or COVID-19, have been recorded around the world since late last year, and more than 6,500 people have died as the world braces for the medical, economic and political fallout of the fast-moving emergency.

The Turkish government’s early decision to suspend travel from China, where the outbreak began, and with Italy and Iran, which have the world’s second- and third-highest infection rates, may have helped slow the spread of the virus here, analysts have said.

But a leading medical group warned on Monday it was receiving reports the number of Turkish coronavirus patients may be “far higher” than the official count. Sinan Adiyaman, head of the Turkish Medical Association, said the 7,000 tests Turkey has so far conducted are far too low at this stage and the government needs to decentralize testing to catch more cases.

“When we look at the rate of contagion, it is clear that the next two weeks are very critical. By foreseeing that the number of cases will quickly rise, taking the necessary precautions now is of vital importance,” Adiyaman told a news conference that was streamed live.

Late last week, the government suspended flights with nine more European countries and set a Wednesday deadline for Turkish citizens to evacuate back home. A pilgrim returning from holy sites in Saudi Arabia was diagnosed with COVID-19 on March 15.

More than 20,000 people who had traveled to Saudi Arabia for the umrah have now returned to Turkey. Social media posts revealed some were not heeding the government’s suggestion that all overseas travelers self-quarantine for two weeks and were instead meeting friends and family, as is traditional after the pilgrimage.

Authorities then decided on Sunday to quarantine more than 10,000 pilgrims in the capital Ankara and central cities of Konya and Kayseri. The head of the religious affairs directorate said on Monday that prayers at mosques would not be held for large congregations, but the houses of worship would remain open to individuals. An estimated 15 million people normally attend mass Friday prayers each week.

Stock markets around the world tumbled on Monday and fears about the global economic impact of the outbreak spread to Turkish assets, with stocks tumbling 8% and the lira skidding to its lowest level since September 2018, when Turkey was still fighting a currency crisis that plunged the country into a recession last year

Finance Minister Berat Albayrak promised to ensure liquidity in the market and additional assistance for sectors that are most impacted. Turkey “is more prepared and vigilant than ever for possible global turbulence,” he tweeted, adding that President Recep Tayyip Erdogan will detail steps to bolster the economy this week.

Erdogan has not been seen in public since last week. He is due to hold a teleconference with the leaders of France, Germany and Britain on Tuesday to discuss the Syrian refugee crisis after the coronavirus emergency forced them to scrap plans for an in-person summit in Istanbul.

The main opposition Republican People’s Party postponed its annual meeting scheduled for later this month, citing fears about the virus. All four political parties canceled their group meetings in parliament this week and the legislature is closed to visitors.