Is Syria unable, or unwilling, to fend off Iran coronavirus contagion?

While close links between Damascus and Tehran put the former at great risk of an influx of COVID-19 cases, Syria's reliance on Iran for political and military support may make stemming the spread more difficult. 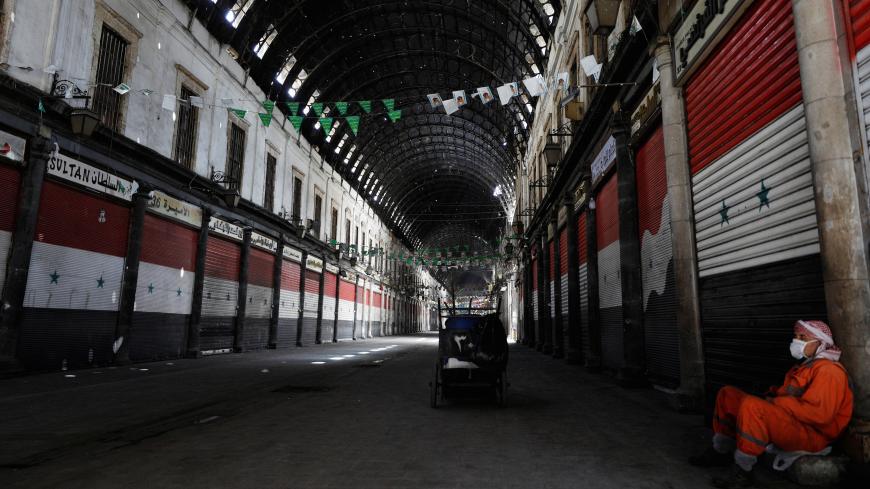 A street cleaner rests at empty Souk al-Hamidieh, as restrictions are imposed as a measure to prevent the spread of the coronavirus in Damascus, Syria, March 24, 2020. - REUTERS/Omar Sanadiki

The UN special envoy for Syria has called for “a complete, immediate nationwide ceasefire to enable an all out-out effort to suppress COVID-19,” warning that Syrians are “acutely vulnerable” to the global pandemic. Geir Pedersen’s call on Tuesday followed the Syrian government’s announcement of its first case of novel coronavirus, a 20-year-old woman, who flew in from the UK and is currently undergoing treatment. But the greatest menace to Syria comes from Iran, which —alongside Italy, China and Spain — is among the worst hit by the disease and where the death toll stood at 2,077 as of Wednesday, according to Iranian officials.

While the Syrian government has introduced a host of preventive measures, including the closure of most state institutions, schools, parks and restaurants — along with a freeze on conscription — it lacks the will and ability to deflect the threat from Iran. Analysts say this is because of its huge dependence on the Islamic Republic in its ongoing war against Sunni rebels, particularly in Idlib, where, despite recent setbacks, the radical al-Qaeda-linked Hayat Tahrir al-Sham continues to hold sway, albeit in shrinking space.

Iran has, since the start of Syria’s nearly decade-long conflict, played a critical role in helping to keep Syrian President Bashar al-Assad in power, with thousands of its own men from the Islamic Revolutionary Guard Corps (IRGC) and multiple Shiite proxies, including Afghan and Pakistani militias.

“Iran is one of the main pillars of support for the Syrian regime,” said Fabrice Balanche, a geographer at France’s Lyon II university who closely monitors the Syrian conflict from the ground. “It cannot accuse Iran of spreading the virus in Syria. Any decision to halt contact with Iran [over coronavirus] would be highly political and strategically perilous,” Balanche told Al-Monitor in emailed comments.

A Western diplomat based in Tehran contacted via Signal today told Al-Monitor that flights operated by Mahan Air, the notionally private airline that is believed to be linked to the IRGC, were continuing between Tehran and Damascus.

“It’s the flights coming in from Tehran and Qom that are furnishing the [Syrian] regime with cash, with fighting men and a lot of other pieces that help keep the regime in power,” said Phillip Smyth, a Soref fellow at the Washington Institute for Near East Policy and the author of “The Shiite Jihad in Syria and its Regional Effects.”

Smyth told Al-Monitor in a telephone interview, “Without those guys, there are no real offensive operations that you can carry out and if you are maintaining a military effort on the ground you are going to need to supply those guys with food, ammunition and with just basic materiel.”

Rebuilding Shiite-dominated neighborhoods in Damascus, Homs, Aleppo, Latakia and Tartus is a key element of Iran’s strategy of bolstering its influence in Syria. This includes not only returning Shiites who fled their homes during the civil conflict, but also bringing in others from Lebanon and Iraq, all part of an alleged demographic engineering scheme to entrench the Islamic Republic’s influence.

Similar efforts are under way in Deir ez-Zor, where growing numbers in the Baggara tribe are converting to Shiism after being encouraged to do so by Iranian proselytizers, Smyth said.

The reconstruction drive — the contracts are a form of payback from the regime to Iran for its military assistance — requires flying in materiel and men as well. So does repairing the Imam Ali base, the large IRGC-run military complex in the Syrian desert bordering Iraq, which is periodically bombed by Israel and the United States.

Even if Syria were to ban flights from Iran, its unclear that Iran would care. Lebanon has barred flights from Tehran but they have continued to arrive, allegedly at the behest of Hezbollah.

Smyth contends the Iranian approach is very similar to that of the Chinese “whereby Iran says, ‘You are part of our circle now, and because of that, if we want to put people on the ground we don’t care what your national laws say, we don’t care what restrictions you put in place, we are going to do it any way, try and stop us’ and as we saw in Lebanon, [Syria] really can’t.”

Raz Zimmt, an Iran expert with the Institute for National Security Studies, an Israeli think tank, said Mahan Air was currently flying smaller planes to Syria. “The volume of air traffic has dropped, but we can’t say it's stopped entirely,” he told Al-Monitor in a telephone interview.

This apparently is not out concern of infecting Syria but rather because Mahan Air is ferrying in medical supplies to Iran from China to combat the virus.

Suspicions that Syria had already been infected grew following reports that Pakistan had detected the virus in various individuals who had traveled from Syria separately, according to an investigation carried out by Syria in Context, a specialist publication, that was shared via Twitter on March 17.

Sunni opposition activists had already been claiming that Shiite militiamen had carried the virus to Syria while others have blamed Shiite pilgrims visiting Shiite holy shrines, the Shrine of Sayyida Zeinab and the Sayyida Ruqayya mosque, both in the Damascus area.

“Interviews with two doctors at Tishreen Military Hospital in Damascus” further corroborated those claims, Syria in Context reported. And while the local representative of Iranian Supreme Leader Ayatollah Ali Khamenei declared that both shrines had been closed, “These steps only led families to take their children to public gardens and places to try and escape their cramped living quarters.”

Tellingly, while the Syrian government said it had sealed its land border crossings with Jordan, Lebanon and Turkey to contain the risk of contagion, it made no mention of the al-Bukamal crossing from Iraq through which Shiite militias are believed to flow, allegedly dressed up as pilgrims.

Zimmt reckons that the regime’s Russian allies, much like Turkish forces and their Sunni rebel allies who occupy swaths of northern Syria, are also at risk of contagion, particularly in Idlib, where over a million internally displaced Syrians are living in desperate conditions near the Turkish border. Local hospitals have been destroyed by Russian and regime warplanes. “Russia is doing a good job hiding their statistics at home,” Zimmt said. (Russia has been accused of classifying COVID-19 deaths as regular pneumonia ones, among other things.) “All of those liars, Iran, the regime, can do the same in Syria. No doubts.”