Pentagon says US will not retaliate for Turkey in Syria

The United States will not take direct action in Syria despite a dramatic uptick in violence and calls for an immediate no-fly zone over Idlib, which would require the Pentagon to take out aircraft and airfields. 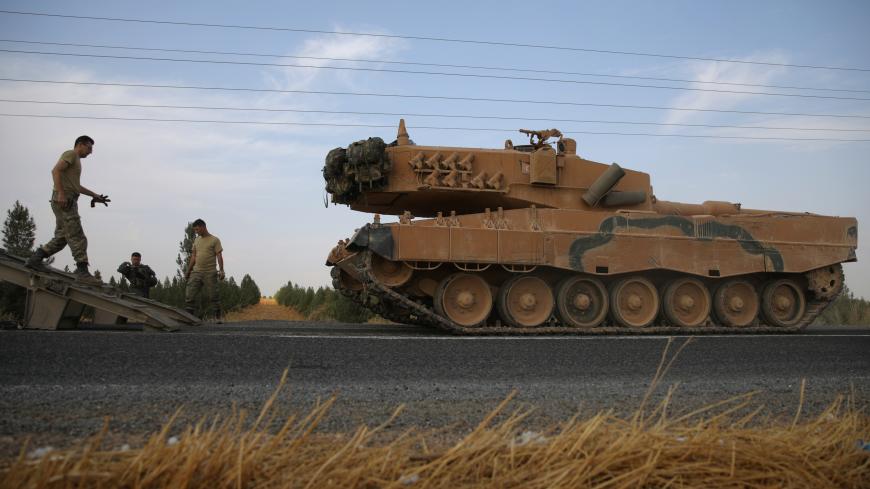 A Turkish tank is unloaded on a road near the Turkish border town of Ceylanpinar, Sanliurfa province, Turkey, Oct. 18, 2019. - REUTERS/Stoyan Nenov

The US administration has ruled out retaliatory airstrikes in Syria after at least 34 Turkish troops were killed in an attack last week, Defense Secretary Mark Esper said today.

Chairman of the Joint Chiefs of Staff Mark Milley, the US military’s top officer, said today that the United States "doesn't have clear, unambiguous intelligence on who was flying which planes." But the deadly strikes took place at night, and Al-Monitor’s Amberin Zaman reported on Sunday that only Russian pilots have the capability to fly in Syrian airspace after dark.

Esper and Milley’s comments appeared to further steer the US administration away from a possible military response in Syria, even after President Donald Trump ally Sen. Lindsey Graham, R-S.C., called for an immediate no-fly zone over Idlib on Thursday. Graham spent hours with Trump on Friday at a rally in his home state.

In the wake of Graham’s statement, Capitol Hill sources contacted by Al-Monitor said they were not aware of any legislative proposal for a no-fly zone in Syria. Esper told lawmakers last week that the administration had not discussed “reengaging in the civil war.”

The State Department, led by special envoy for Syria Engagement James Jeffrey, has tried to put forward the idea of a no-fly zone before, but only for areas where 600 US troops are stationed in northern Syria, the former official told Al-Monitor. The idea had not come up at US Central Command, the Pentagon’s command center for the Middle East.

Legal barriers to such a proposal could also prove prohibitive, US officials have said. A senior aide to Jeffrey said at a closed-door event in Washington last week that the United States lacks legal avenues to ground Syrian President Bashar al-Assad’s air force or shoot down his warplanes.

American troops are still in Syria in a reduced role after Trump ordered a withdrawal from areas of the northeast recaptured from the Islamic State last fall to allow for a Turkish incursion. The US forces killed 200 to 300 Russian fighters and pro-regime troops in a four-hour battle in February 2018 over the Conoco oil fields, a major petroleum installation controlled by the US-backed Syrian Democratic Forces.

Turkey also triggered consultations under NATO’s Article 4 on Friday as it carried out a series of drone strikes targeting Syrian regime forces that Ankara says laid waste to more than 100 tanks and killed 2,212 pro-Assad forces since Feb. 27.

Esper said he spoke to NATO Secretary-General Jens Stoltenberg about the uptick in Syrian fighting during a visit to Afghanistan over the weekend as the United States looks toward a humanitarian response to the crisis. Jeffrey and US Ambassador to the UN Kelly Craft began a trip to Turkey’s border region today.

“This is where we all knew where the rubber meets the road,” a US official told Al-Monitor. “Turkey can’t afford to back down, but Russia has no interest in mediating. And add hundreds of thousands of potential refugees on top of it. My fear is that this is going to get really, really ugly.”