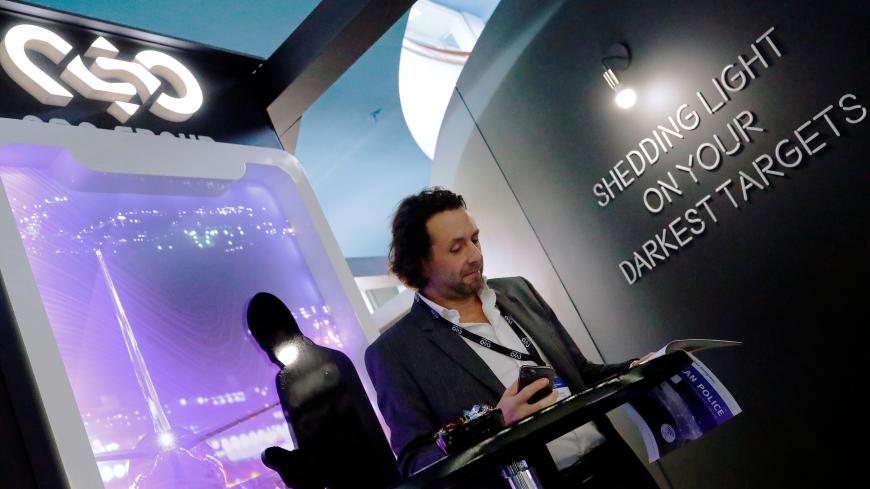 A man reads at a stand of the NSO Group Technologies, an Israeli technology firm known for its Pegasus spyware enabling the remote surveillance of smartphones, at the annual European Police Congress in Berlin, Germany, February 4, 2020. - Reuters/Hannibal Hanschke

Mercury Public Affairs is tapping former British officials to help lobby for Q Cyber Technologies and its better known subsidiary the NSO Group as the Israeli spyware company faces a global backlash over accusations that it helped authoritarian regimes spy on dissidents. In addition to five US citizens retained in January to help fight against lawsuits in the United States, Mercury has now added three people in its London office to the account.

Mercury Vice President Toby Denselow, a former aide to British lawmaker Glenda Jackson,  and Senior Vice President George Tucker, a former British diplomat, joined the account in January but their filings were only made public by the US Justice Department this week. They join former Labour Party staffer Louis Rynsard, whose work on the account was already known. Mercury did not respond to a request for comment.

NSO has multiple connections to Great Britain. London-based private equity fund Novalpina took control of the company last year, and four Novalpina executives were served with the lawsuit that Facebook and WhatsApp filed in US federal court last year accusing the company of using WhatsApp servers to send malware to 1,400 users with country codes from 20 countries, including Bahrain and the United Arab Emirates. Mercury has been handling public relations on the matter, this week distributing court filings from NSO lawyers at King & Spalding accusing Facebook and WhatsApp of lying to the court. The firm also faces legal scrutiny in Britain, where Saudi comedian Ghanem Almasarir has sued Saudi Arabia alleging that Riyadh targeted him with NSO software while he was living in London.

Meanwhile, Labour Party politicians have been asking questions about the British government’s relationship with the spyware company. NSO attended a Security and Policing trade fair in southern England this month, prompting a complaint from Labour MP Lloyd Russell-Moyle, who accused the government of “helping despots hunt and kill dissidents.” Meanwhile, Tom Watson, then a member of parliament serving as shadow secretary for digital affairs, raised the issue of the WhatsApp data breach and NSO’s role during a speech to parliament in May 2019, as did Drew Hendry, a Scottish National Party lawmaker.

NSO has also come under fire in the European Parliament. Eva Kaili, a member from Greece, asked the European Commission for answers about NSO in November. In December 2018, Marietje Schaake, then a member representing the Netherlands, asked the European Commission questions about the company. In the United States, Sen. Ron Wyden, D-Ore., the top Democrat on the powerful Senate Finance Committee, announced in November plans to investigate whether the firm hacked Americans.