How Israel's media fails the country amid coronavirus, political crises

With political and health crises gripping Israel, the media has shirked its responsibility to challenge government officials and report the facts. 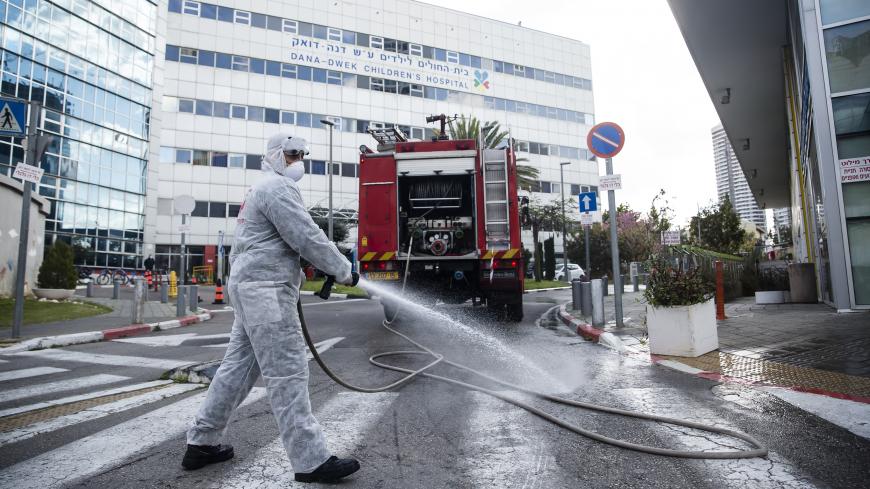 An unending stream of past and present Health Ministry officials, experts in exotic diseases, public relations experts, coronavirus patients, self-isolating individuals and of course politicians has commandeered the screens of the leading television channels in Israel. This is how crises in Israel go, with news studios inundated by a wave of coverage that feels like one continuous broadcast. The problem is that between a conversation with a model in London about the difficulties of adapting to isolation and wisecracks in the studio to break the tension, one gets the impression there’s no time left for the news itself, investigative reporting or meaningful debate.

In Israel today, there are two big crises — one political and the other involving public health. In this environment, are Israeli media asking penetrating questions? How are journalists dealing with politicians trying to evade answers and responsibility? Is media coverage objective or does it display bias? In the digital era, with so many still images and videos available online, and when every citizen armed with a camera or cellphone can be a blogger, it is sometimes difficult to distinguish between fact and fiction. This reality demands that the media takes it duty to check facts seriously.

A report about huge lines at supermarkets in Belgium broadcast March 13 on Channel 12’s Friday Studio included footage that left the impression that people were storming supermarkets in a fit of panic buying because of the coronavirus outbreak. This then caused a panic among those who watched it, but it turned out to be fake news. The video was from 10 year ago and filmed in Germany. At the end of the program, the presenter, Danny Kushmaro, apologized to viewers. At the same time, politicians reiterated that there is no food shortage and therefore no need to hoard food. It didn’t matter. The next day, Israelis rushed to the their local grocery stores.

This isn’t the first time that distorted or inaccurate news item has appeared in prime time, but the timing was terrible. According to research by the Seventh Eye, an independent news site, 55% of journalists surveyed in 2003 said that news reporting in Israel is “full of factual errors and carelessness.” In the ensuing 17 years, not much has apparently changed.

In the last three weeks, media in Israel have played a significant role in heightening the level of panic and misleading the public. Hearsay and deliberate leaks by members of the government about the possible number of coronavirus deaths and about Israeli scientists soon developing a vaccine have become news reports with a public impact. The story of Vered Saban, who violated isolation protocols, epitomizes this phenomenon.

Saban claimed in an interview on one of the morning TV shows that she had been violated a medical order to self-isolate after seeing a tweet by Blue and White senior Yair Lapid allegedly indicating that it was ok to do so. Globes journalist Tal Schneider, however, revealed on March 23 that Saban had been prepped before the interview and that there was no connection between Lapid and her ignoring medical advice. The problem is that many of the people who saw Saban's interview likely did not then read the Globes story, just as many who saw the story about food shoppers in Belgium didn’t see Kushmaro’s apology at the end of his broadcast.

As noted, Israel is simultaneously dealing with the coronavirus outbreak and an unprecedented political crisis. After three elections in a year, a transition government continues to make weighty decisions without Knesset oversight. From the start of the current health crisis, the interim prime minister, Benjamin Netanyahu, has held a number of news conferences in which he has praised himself and the work of his government, explained to Israelis how they should cough and sneeze and scared viewers by telling them that soon “there could be tens of thousands dead here.”

Because Netanyahu does not take questions from the press at these events, he does not have to publicly deal with the reality that regardless of how people sneeze, doctors at hospitals and clinics still lack masks and other protective gear and that the Ministry of Health is chaotic and its officials are making conflicting declarations. Israeli media have not asked Netanyahu’s people to turn these nightly performances into actual press conferences and haven’t threatened to boycott them. Instead, Netanyahu gets prime time coverage without input or questioning from the media, which ignore his incitement, cynical abuse of the magnitude of the moment and conscious manipulation. They simply go along for the ride, loyal and subservient to him.

Hundreds of Israelis got into their cars on March 23 and drove toward the Knesset. They flew black flags on their cars in protest of Knesset Speaker Yuli Edelstein refusing to hold a vote to elect his replacement as demanded by 61 of the 120 new Knesset members and then ordered by the nation's High Court. Four days earlier, hundreds of people had tried to reach the Knesset to protest the damage being done to democracy. In between those events, on March 21, some hundred thousand citizens took part in a virtual protest against efforts by Netanyahu and his Likud party to shut down the Knesset by citing a national emergency because of the coronavirus. Common to these demonstrations was the media’s complete disregard for their job. The journalist and social activist Or-ly Barlev tweeted a video of protesters traveling to Jerusalem and asked her followers to retweet the impressive event, which leading media outlets barely covered.

Naturally, most media these days are focused on the coronavirus crisis. Israel's hegemon, the interim prime minister, is also getting a lot of attention. It defies logic that the media would ignore the critical moment confronting Israeli democracy in the unprecedented form of a Knesset speaker refusing to implement a High Court order. No less astonishing was Channel 12 Knesset correspondent Dafna Liel stating, “In the end, the government has to adopt moves, and the Knesset has to authorize them in legislation, and there should be cooperation.” Such is her obvious lack of knowledge about the government. It is the Knesset's duty to oversee and check the government, not to “authorize the government’s moves in legislation” without regard to the public interest. Many analysts and correspondents have used expressions like “dismissal of the Knesset speaker” although the issue is actually voting on a new speaker, as occurs after every election.

There is no doubt that the current health and political crises have caught the Israeli media at a time when they are divided and weak. It’s not clear how and when they will return to fulfilling their role: checking facts meticulously, challenging government officials and objectively reporting on reality.