Netanyahu, Gantz must return to Cairo 2016

Blue and White leader Benny Gantz should agree to a unity government with Prime Minister Benjamin Netanyahu, not just to fight the coronavirus, but to resume the Cairo talks with Palestinian President Mahmoud Abbas. 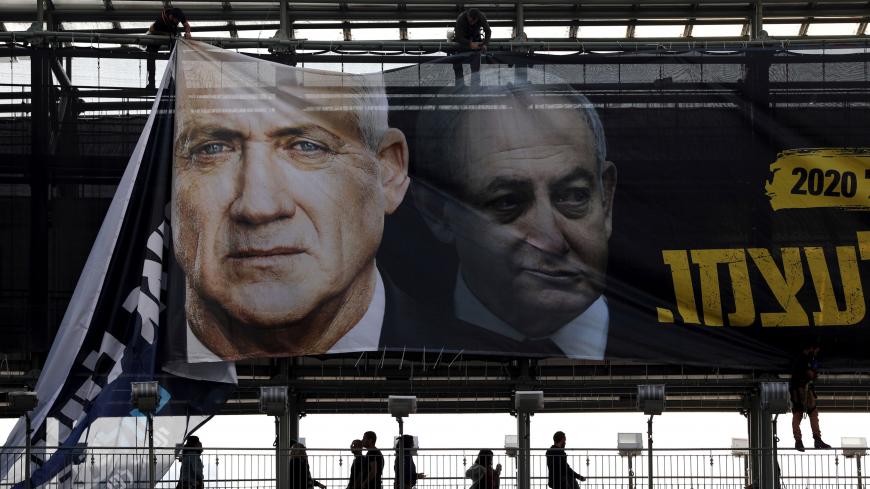 The results from Israel’s third elections greatly resemble the results from the previous two rounds. Still, there are two major differences. The first is the coronavirus effect. The second is a growing consensus that Israel cannot afford a fourth election round.

With so many people quarantined and not knowing when COVID-19 will disappear, fixing a date for new elections seems impossible. That could mean that a fourth round would be deferred for too long. Also, the new financial needs brought about by the coronavirus crisis cannot be provided for without a budget. Because Israel's governments have been interim ones, the country has lacked an approved state budget for over a year now.

For Prime Minister Benjamin Netanyahu personally, any arrangement that may keep him in his job — including a few more months in an interim government — is better than the alternative. Netanyahu had been seeing everything through one prism — the date when his trial was set to begin. Although it had been scheduled to start March 17, it was postponed until May 24 following the decision by acting Justice Minister Amir Ohana on March 15 to reduce all courts activities due to the coronavirus. Whenever the trial begins, Netanyahu is convinced that entering the court as prime minister would be better for him (though I doubt this theory) than doing so as a has-been. Thus, the interests of the State of Israel and its prime minister are mutually exclusive.

Matters are less clear for Blue and White leader Benny Ganz, who vowed to prevent a fourth round of elections, but at the same time finds it very difficult to form a government involving the Arab Joint List party (dissidents in his own party and in his center-left bloc reject this possibility).

If he cannot overcome his inner opposition, and if he cannot breach his (wrong and provocative) campaign pledge not to lean on the Joint List when he forms his government, Gantz will be forced to breach one of two other electoral campaign promises he made before March 2: To prevent a fourth round of elections, and not to serve in a government under Netanyahu.

This brings Gantz to the option of national unity. The only realistic option for establishing a unity government in a situation in which neither Netanyahu nor Gantz can form their like-minded coalition is a government with a rotating premier. Because of his trial, Netanyahu needs to be the first. In fact, Israeli legislation enables such a situation. According to the law, while a Cabinet minister who has been indicted must resign from the government, an indicted prime minister may remain in his job until the end of his legal process. The logic behind this is that if the prime minister is forced to resign, the whole government has to resign with him, and that could create a political crisis. But — as President Reuven Rivlin proposed last year — as long as Netanyahu's trial continues, he should remain premier only by title, declaring himself incapacitated. According to this outline, Ganz would serve as acting prime minister during the period of Netanyahu's trial, and then as full prime minister in the last two years of the current Knesset term.

Last time, Ganz rejected this formula (because, among other reasons, he didn't believe that Netanyahu would really leave his post and enable the rotation). Now, if Gantz genuinely doesn't want a fourth round, he will have to take that risk.

Still, if he decides to do this, Gantz will need a good enough reason to justify to the public why he did not agree to this option when it was first proposed. The need to fight the coronavirus could serve him as explanation — Israel reported having 255 cases as of March 16. A more convincing explanation would be an agreement with Netanyahu on a united effort to resume the negotiations with the Palestinian leadership as long as President Mahmoud Abbas is in his chair. The common denominator of a joint government cannot be a unilateral annexation of territories in the West Bank, or the unilateral "deal of the century" of President Donald Trump. The common denominator can be the general understandings reached less the four years ago, in Cairo.

At that point in 2016, with a very fragile coalition, Netanyahu tried to convince Zionist Camp party leader and head of opposition Isaac Herzog to join his government. In order to cater to Herzog’s demand for the launching of serious negotiations with the Palestinian leadership, Netanyahu flew with Herzog to Cairo in April 2016, for a secret meeting with Egyptian President Abdel Fattah al-Sisi. A serious dialogue took place there on renewing talks with the Palestinians toward a Palestinian state, within the context of a regional peace plan.

The Egyptian president was so sure that the meeting would open a new chapter in the Middle East history that a few weeks later, during the launching of a local power station (nothing to do with Israel), he called upon Israeli political parties to reach general understanding on an agreement with the Palestinians. He called upon Israel’s political leadership to use this big opportunity to put an end to the long-overdue conflict. At the time, pundits in Israel didn't understand the context of Sisi's call, but a year later, the secret was revealed.

The extreme rightists in the Likud government thwarted the attempt to form a unity government with the Zionist camp (Labor) party. They caused Netanyahu to offer the very sensitive defense portfolio to Avigdor Liberman, head of the hawkish Yisrael Beitenu party. The option of a unity government was blocked, and the outstanding call by the Egyptian president remained unanswered.

A bold step toward renewing these Cairo negotiations is a vital Israeli priority. That would be the most practical way to assure that Israel remains a Jewish and democratic state. Cairo talks demonstrated that for one moment at least, Netanyahu, Herzog, Sisi, and apparently also Abbas and Jordanian King Abdullah, agreed to relaunch a peace process. And since most of these people still hold their leadership positions, renewing these talks and seizing that opportunity should be the common denominators of a new unity government.