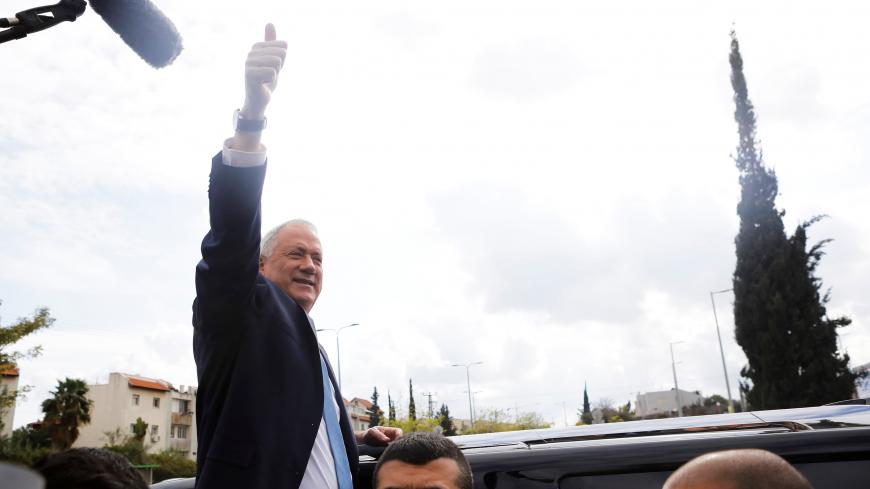 The formation of Blue and White brought together strange bedfellows, from the left and the right, whose shared goal was to oust Prime Minister Benjamin Netanyahu and to stop his Trump-like war against Israel's Gatekeepers, including Supreme Court justices, the attorney general and the police commissioner as well as others. The alliance was a success story. It wasn't strong enough to elevate its leader, Benny Gantz, to prime minister, but it proved sufficiently strong to block Netanyahu's attempts to form a new government after elections last April. Netanyahu subsequently dragged Israel into two more election campaigns, but they didn't change the political landscape.

In recent weeks, Gantz has faced a multitude of issues. He knew that Netanyahu’s caretaker government would remain in place as long as no new government was formed. He realized that a narrow government led by Blue and White and supported (from the outside) by the Arab Joint List would be impossible, because three members of his own bloc reject such support. Gantz therefore took the bold decision to break his major campaign promises and agreed to serve in a unity government under Netanyahu, who in a few weeks will appear in court to face serious criminal charges.

Gantz’s very unexpected decision led not only to splitting his young party, but also to complying with Likud demands to change Israel's Basic Laws as a matter of political convenience and expediency. Recent polling shows that the parties that came together to form Blue and White are now quite weak, while the Likud has grown in strength. That said, it is still too early to ascertain how the situation will develop going forward. At the end of the rotation government, Gantz might very well be considered to have been a popular and successful prime minister. Still, such projections cannot explain or justify changing important national laws.

Britain and Israel are the only democratic countries that do not have constitutions, but the reason for Israel not having one is not the 30 odd years of British mandate rule over Palestine. According to UN General Assembly Resolution 181 (1947), on partitioning Palestine, the resulting Arab state and the Jewish state were each to form constituent councils to draft democratic constitutions. The resolution also refers, in detail, to the major principles of these future constitutions.

Israel’s Declaration of Independence (May 1948) refers specifically to the need to adopt a constitution by Oct. 1, 1948. It appears that even before Israel's founding, David Ben-Gurion had been eager to adopt a constitution. A special committee headed by the ultra-Orthodox Zerach Warhaftig seriously engaged in promoting the idea, but at some point its work came to a halt. Ben-Gurion understood that the religious parties would oppose a constitution, perceiving it as an (attempted) alternative to the Torah. Thus, they would prefer an Israel that functioned by statute.

Eventually, in 1950, a compromise was reached: The Knesset would enact a list of Basic Laws that in years to come might collectively become a constitution. These laws, based on the spirit of the Declaration of Independence, would in short cover broad constitional issues, such as civil liberties and the functioning of government. The problem with this compromise was (and remains) the lack of any clear-cut criteria for the issues and principles that justify being designated as basic law. More so, Israel’s Basic Laws differ in the way in which they can be amended, for example, by a simple majority, a majority of the Knesset members present in the plenum, a special majority of 60, 70, 80 or even 90 members, and so on.

As it happened, Israel’s Basic Laws were never transformed into a constitution. People got used to a certain legal flexibility, which led to changes in legislation, and especially the Basic Laws, to be viewed as commonplace. Thus rules of the political game can be changed while the game is still on, even though it undermines the stability of the system and creates an atmosphere in which every law is provisional. The various routes and negotiations toward the formation of new coalitions turned Basic Laws into bargaining chips to be easily trampled.

The Basic Law: The Government determines among other things that the government should consist of a prime minister and 18 other ministers. According to reports on the deal currently being crafted by Netanyahu and Gantz, the article establishing this number, which can be changed only by a majority of at least 70 Knesset members, will be cancelled (or deferred) immediately before the swearing in of the new government. The idea is to enable the establishment of the largest-ever Israeli government — starting with 30 ministers in the first stage and later increasing them to 34 — for no valid, functional reason. The large number of ministers serves one purpose only: to prevent potentially unsatisfied Likud ministers from wrecking havoc. This will surely be an expensive, reckless and unnecessary action, which Gantz should not facilitate.

The outline of the unity government deal foresees many legal changes. Some of them are supposedly to enable the functioning of the new government, but in reality they will harm the spirit of the Israeli parliamentary system. One example is an arrangement by which the vice prime minister (Gantz) would be automatically nominated after 18 months to assume the role of premier without the incumbent prime minister (Netanyahu) resigning and without a vote of confidence in the Knesset approving the new head of state.

There are other legal changes, however, that demonstrate real hutzpah, as their sole purpose is to abuse the COVID-19 crisis and the concomitant sense that Israelis want a unity government and therefore will not criticize its high cost. Such is the decision to enact the so-called Norwegian Law, which would allow ministers to resign from the Knesset to assume their cabinet post so that the next person on their party list can replace them in the parliament. After the ministers resign or are forced from the government, they can return to their seats in the parliament held open by their fellow party member. This legislation was introduced in the 20th Knesset as a temporary provision. Ganz now needs it, because otherwise, all his party members would be ministers, leaving no one to serve on important Knesset committees. Of course, when ministers relinquish their positions as parliament members and are replaced by other members of their party, someone has to finance it. In short, with the economic and budget crisis stemming from the coronavirus outbreak, the law would force the state to budget for dozens of new, temporary Knesset members. Their presence would contribute little to the operation of the parliament, benefiting only the partisan needs of political leaders.

The most astonishing anticipated decision is a change in the Basic Law: Government to allow the prime minister as well as the vice prime minister to continue working while under ciminal indictment. By law, when the prime minister resigns, the whole government resigns. That is why a premier, if indicted, is allowed to remain in power until final adjudication by the courts, unlike the situation involving any other indicted minister, who would be required to resign. The law supposedly seeks to avoid a political crisis, but the resignation of a vice prime minister would not cause any such crisis. The reason for this change to the Basic Law is simply to allow Netanyahu to serve under Gantz if his case remains unresolved a year and a half from now.

Gantz entered politics to end the political career of a prime minister under suspicion of bribery. Now that that prime minister has been indicted and will have to stand trial, Gantz is not only ready to serve under him, but is also prepared to change the law so the indicted man can serve as his vice premier. This is mind-boggling. Hopefully, once in power, Gantz will understand the price of not having a constitution, and by promoting the adoption of one, will atone for all the above sins.