Blue and White leader Benny Gantz’s attempts to establish a minority government with the support of the Arab Joint List is leading right-wing ministers to intensify their inciteful tone against Arab legislators. 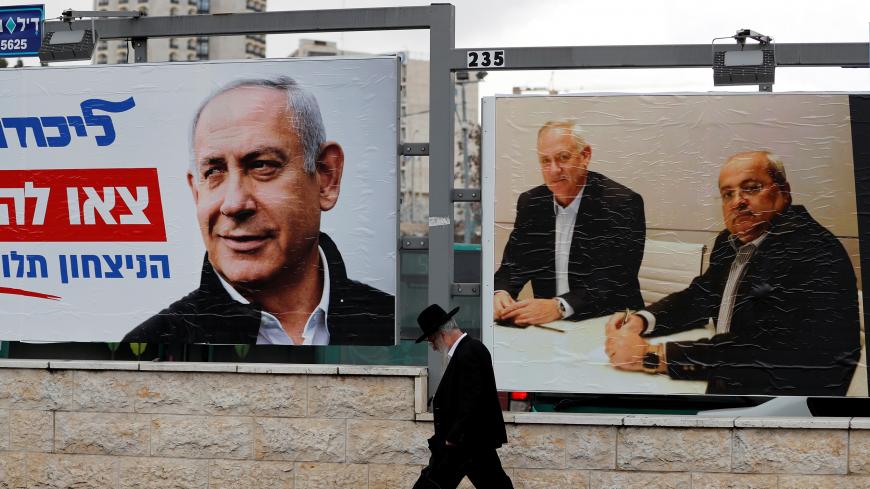 As Prime Minister Benjamin Netanyahu’s political career nears its end, the tone of incitement under his guidance rises another notch. These are no longer only words and slogans of a tense election campaign, borderline statements that can be shrugged off — but wild incitement that can be understood as a call for murder. These statements have been uttered by the most senior ministers of Netanyahu’s government. It almost looks like they are reading aloud messages crafted by the prime minister’s office. And these messages strongly imply that a government under Blue and White leader Benny Gantz with the support of the Arab Joint List, would be an act of treason. No less.

Foreign Minister Israel Katz, who in the past was viewed as a rival of Netanyahu, has become one the ministers closest to the prime minister over the last year. Now, faced with the possibility that Joint List members might recommend Gantz to assemble a coalition, Katz said in a March 8 Kan Reshet Bet radio interview that the Joint List Knesset members are “terrorists in suits or supporters of terrorists in suits.” Joint List chairman Ayman Odeh reacted to Katz's comments by saying, “The Likud has losers in suits.” This hints that the Likud is not willing to admit that Netanyahu lost the last elections; some say the Likud is venting its fury by defaming Joint List members and inciting against them, claiming that a deal with “terrorists” is equivalent to treason.

Joint List Knesset member Ofer Cassif also reacted harshly to the statement by Katz, tweeting, "Listen to me, Katz —– the [real] terrorists are you and your friends. … We will do everything to bring down your racist regime and [instead] strive for a joint future, without racism and violence.” Another member of the faction, Knesset member Yousef Jabareen, turned to Attorney General Avichai Mandelblit to request that an investigation be opened against the minister for inciting racism. “This is wild incitement against the Arab public and is especially dangerous when it comes from the mouth of a high-placed minister in the government,” Jabareen said.

Even before the Katz story died down, Tourism Minister Yariv Levin (appointed by Netanyahu to conduct coalition negotiations) lifted incitement up another notch when interviewed by the Ynet site. Levin said March 9, “The Joint List receives its instructions from Hezbollah.”

In fact, well before Katz and Levin jumped on the incitement bandwagon, Defense Minister Naftali Bennett already had had his say March 5. “As defense minister, I state that an Israeli government dependent on the votes of the Joint Arab party constitutes a clear and present danger to the lives of Israeli citizens and IDF soldiers,” he said without elaborating.

On March 9, a text message was sent to hundreds of thousands of Israeli civilians featuring statements made by Joint List members in the past, statements taken out of context. It ended with the following summary: “These are members of the Joint List, with whom Gantz wants to create a government dangerous to Israeli security. We cannot let this happen.”

The text message did not give instructions on how, exactly, “not to let this happen.” But since there is ostensibly no democratic-parliamentary way to prevent the establishment of such a minority government, we can assume that the senders of the message are referring to violent demonstrations.

“This time, the incitement is more serious and dangerous than the incitement that preceded [Prime Minister Yitzhak] Rabin’s murder,” Ofer Cassif told Al-Monitor. “The concern is that one of us may already be a target on someone’s sights.” Cassif said the ones facing real danger are Blue and White Chairman Gantz and Joint List senior official Ahmad Tibi; the latter was verbally targeted in the past year by Netanyahu’s delegitimization campaign, “Tibi or Bibi” (either you vote for Netanyahu or you’ll find yourselves ruled by the Joint List). Netanyahu’s campaign people turned Tibi into a red flag, a code name for all the dangers that Israel faces.

Cassif said, “There is no doubt that the person behind the incitement campaign, who guides the speakers to wild incitement, is Benjamin Netanyahu. When Netanyahu says in a speech to his crowd of supporters in a Petach Tikva assembly that ‘We and millions of citizens will not let this happen’ — how, exactly, will he ‘not let it happen’? The elections are over. The decision was made in the voting booth. What Netanyahu means now is calling for people to go out to the streets [to demonstrate].” Cassif said the subtext of Netanyahu’s words is an explicit call for violence aimed at people identified with the left — Knesset members, media people and the legal system. “He has fired the first shot toward a civil war; there is no other way to explain it,” Cassif said.

Meanwhile, against the background of threats and incitement, it was decided March 10 to beef up security for Gantz and to transfer the responsibility for his personal safety from the Knesset Guard to the Shin Bet. Two days earlier, former Shin Bet head Yuval Diskin told the Haaretz newspaper, “There is the potential for a return to the days preceding Rabin’s murder; the social networks are intensifying the incitement effect.” Still, security was increased only for Gantz even though additional Knesset members from Blue and White, and of course Joint List Knesset members, are also threatened. Cassif said hawkish Yisrael Beitenu leader Avigdor Liberman is also a target for incitement, as is Blue and White Knesset member Ofer Shelah, who is in charge of negotiating with Tibi regarding the formation of a minority government.

Netanyahu has not said a word to calm things down and has not asked for the discourse to be restrained, not even for appearance’s sake. His absolute silence says everything. He is clearly behind this discourse, and his minions — Katz, Levin, Yoav Galant and others — fan the fires of incitement in order to thwart the formation of a minority government that would remove Netanyahu from the prime minister’s domicile.

Next week, on March 17, will mark the beginning of Netanyahu’s trial in the Jerusalem District Court. Meanwhile, Gantz will continue his efforts to establish a minority government with the support of the Joint List. That seems almost impossible now: Opponents of the idea have risen from within his own party and Gesher leader Orly Levi-Abukasis surprised everyone March 10 by announcing that she will not enable the formation of such a government. But if Gantz is successful in overcoming all the obstacles to form a government, then all bets are off: Israel will be in desperate need of sentinels to avert the next political murder.

Are Israel’s sentinels capable of doing so? It is very doubtful. Ever since Netanyahu was indicted, he and his cronies have been actively trying to destroy Israel’s law and justice system. When Netanyahu is the one to set the tone, no horror/bloodshed scenario is imaginary.