The Kurdistan Regional Government in Iraq has imposed a ban on communal worship in mosques because of the new coronavirus, but some people are ignoring the danger. 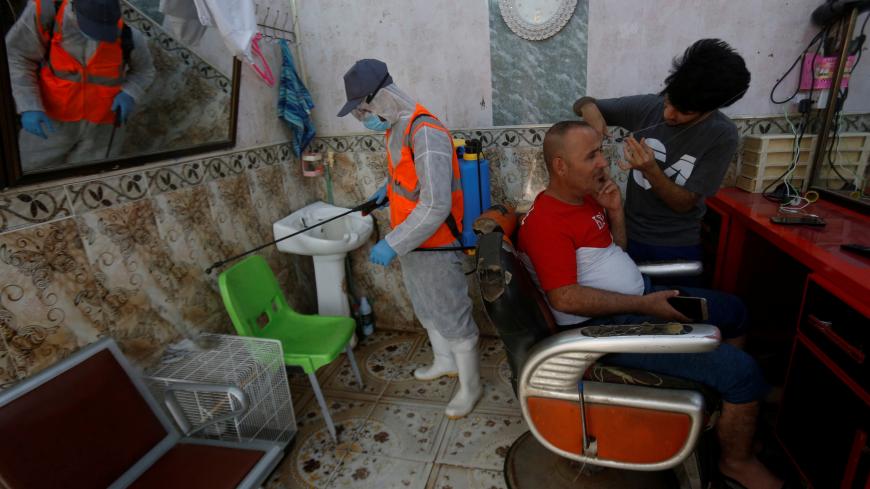 A worker in protective suit sprays disinfectants in a barber shop at a popular market, following an outbreak of the coronavirus, Basra, Iraq, March 10, 2020. - REUTERS/Essam al-Sudani

Some prominent clerics there are reminding Muslims that the Quran promises a martyr’s reward for the faithful who trust in Allah despite pestilence like Covid-19. Some are sharing a Kurdish poem that reads, “You youths take the mosque’s path / do not care about what is on your way / our mosque’s congregation is far away from epidemics.”

This is quite concerning to health officials. Though the number of infections in Iraq and Iraqi Kurdistan is thought to be small at this time, Iraq shares a long border with Iran, which is a hotspot for the virus.

The Kurdistan Regional Government (KRG) Health Ministry on March 1 announced the first confirmed coronavirus cases in the region. “Tests were conducted for 24 [suspected cases]. As a result, four people from Sulaimaniyah tested positive for Covid-19, including a family of three and another woman who all returned from Iran. All of those who tested positive for the coronavirus were in quarantine," the ministry announced in a statement.

As of March 11, 71 cases of Covid-19 had been officially recorded in all of Iraq, including 15 in the Kurdistan Region. Seven people had died nationally, including one in Kurdistan, and 15 had recovered, leaving 49 active cases.

Rashid Abdulrahman, a preacher at Khanaqa Mahmwi Mosque in downtown Sulaimaniyah, was recorded March 3 as the first coronavirus-related fatality in the Kurdistan Region and Iraq. The cleric, 70, had chronic heart and asthma conditions, and previously had undergone heart surgery. He had not visited Iran recently, his son told the media March 4.

A day before the cleric’s death, the Supreme Fatwa Committee, affiliated with the Kurdistan Region’s Islamic Scholars Union (ISU), said in a statement, “According to Islamic Sharia, daily congregational prayers as well as Friday prayers in mosques cannot be halted now except in those places where the virus has spread. In such a case, the KRG ministries of health and endowment and the fatwa committee can jointly decide to halt congregational prayers until the epidemic ends.” It continued, “Anyone who dies due to Covid-19 is regarded a martyr as per Islamic Sharia."

Hours after the cleric’s death, the KRG Council of Ministers decided “to halt all religious ceremonies, rituals and activities — including Friday sermons — in mosques, churches and temples throughout the Kurdistan Region until further notice.”

“The decision was per a request by the KRG Ministry of Health to stop all gatherings as a protection measure against Covid-19, and the Supreme Fatwa Committee did not object,” ISU head Abdulla Saed Waisy told Al-Monitor. “We always think that the lives of human beings are more important than going to the mosques. In Islam, it is permitted to not perform congregational prayers in the mosques during epidemics, and Muslims are not sinful in this regard.”

Ali Qardaghi, general secretary of the International Union of Muslim Scholars, also a Kurd, said in a recent fatwa regarding the coronavirus that according to Islamic guidelines, Muslims are permitted to pray in their homes due to fears of epidemics.

But some Muslims overlooked the KRG’s move and continued performing congregational prayers and Friday sermons in marketplaces, parks and outside mosques.

“On March 6, we gathered in a park to perform our religious sermon. I decided to preach to the increasing number of attendees, talking about precaution measures against the virus and asking God to keep us from the virus,” a Kurdish cleric and employee of the KRG Ministry of Endowment told Al-Monitor on condition of anonymity, fearing reprisal from Kurdish officials.

“Protection is necessary, but we as Muslims believe in the Quran, which stipulates Muslims should rely on Allah in everything.”

The KRG and Iraq’s interim government have taken measures — though delayed — to limit the spread of the coronavirus from neighboring Iran, where that country’s first case was recorded Feb. 19. As of March 10, Radio Farda reported there had been more than 900 fatalities attributed to the virus in Iran, though the Iranian Health Ministry was still claiming on March 11 that the official count was 354. Iran has reported more than 10,000 cases as of March 12.

The measures taken in Iraq have included closing all schools, universities and religious places, and canceling direct flights to and from Iran. Iraqi citizens returning from Iran must spend 14 days in quarantine. However, many Kurds are believed to have returned from Iran illegally, bypassing official quarantining measures at the risk of spreading the virus.

The KRG formed the High Council to Combat the Coronavirus and has given public sector employees — except for the health and security sectors, and militias — two weeks of vacation. But many locals express concern that marketplaces, cafeterias and night clubs are still open.

In other measures, the Iraqi government suspended March 8 all trade activities with Iran and Kuwait until March 15, but the KRG continues to keep its border crossings open to profitable trade from Iran.

A reliable source from Iran’s Kurdistan Region told Al-Monitor that the virus, which is spreading quickly across Iran, terrifies the public.

“Iranian truck drivers who enter the Kurdistan Region from the border gates are a potential source of further spreading Covid-19 into the region,” the source said.

The KRG Ministry of Health announced March 6 the first case of the coronavirus in the capital city of Erbil: a 33-year-old pregnant woman who is in good health. Prior to that date, a source at a government hospital in Sulaimaniyah city told Al-Monitor on condition of anonymity that the virus had already spread in Erbil, but the authorities were hiding that news. The source also said two physicians who had connections with the late cleric are being quarantined.

KRG Health Ministry spokesman Muhammad Qadir told Al-Monitor that the government is not meddling with statistics.

“We are sharing our data on Covid-19 directly with the World Health Organization [WHO], thus these figures cannot be [obscured for political purposes]. Our shared information with the WHO is shown at the national and international levels. We declare official figures on a daily basis, and we have no interest … in hiding the facts,” Qadir said.

“We recommend that citizens avoid all gatherings and that all public places should be closed, but the KRG administrative authorities should carry out the decisions.”

The KRG Health Ministry announced March 8 that of the 2,918 people known to have returned to the region recently from Iran, 1,790 had been cleared to return to their homes, after their test results were negative. The rest were still under a 14-day quarantine.

The KRG has set March 15 as the deadline for Kurdish citizens to return home from Iran.

The coronavirus and a deep political crisis will soon force Iraq and the Kurdistan Region to face serious health and financial challenges. The sharp decline of crude oil prices by 24% threatens to leave the country with a deficit of nearly $60 billon in its proposed 2020 budget, which has yet to be passed by the federal parliament. With people ignoring warnings to avoid gatherings, the number of coronavirus infections and fatalities are expected to rise across the country.