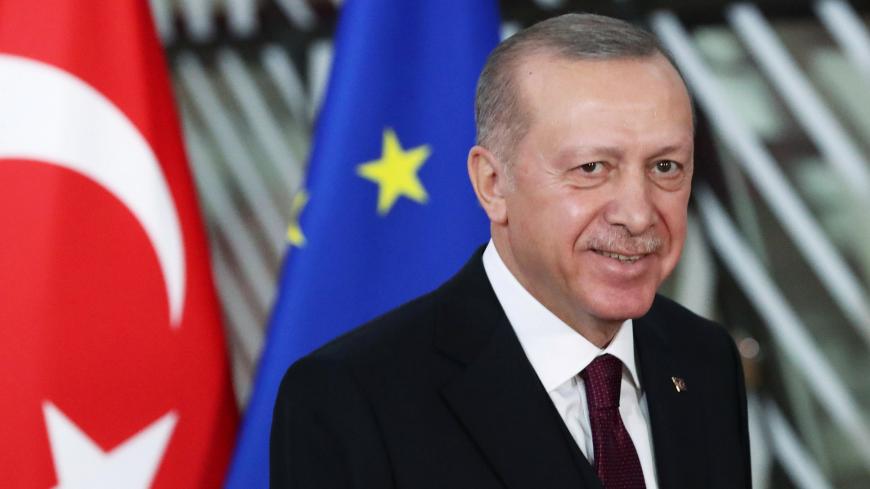 Turkish leader Recep Tayyip Erdogan held a video conference call with France’s Emmanuel Macron, Germany’s Angela Merkel and Britain’s Boris Johnson today to discuss the Syrian refugee crisis, Libya and the coronavirus pandemic. The mini summit was meant to take place in Istanbul but was held virtually instead because of the travel restrictions stemming from the spread of the virus. The reported number of cases in Turkey had risen to 98 at the last count with one fatality so far.

Photographs showing Erdogan and his top aides sitting around a table facing a giant screen will have snuffed out mounting speculation that the Turkish leader may have contracted COVID-19. His cheeks were ruddy and he seemed alert. Erdogan hadn’t been seen in public since Friday prayers, where thermal cameras were used to watch for potential carriers in the congregation.

Details of today’s summit have yet to emerge but the primary focus was to have been Syria’s northwestern province of Idlib, where the latest Russian-backed regime offensive has sent over a million civilians fleeing to the Turkish border. As the EU sat on its hands, Turkey declared that refugees within its borders were free to leave, encouraging thousands to pile up along the Greek frontier. The hard-nosed gambit was calculated to shock the EU into upping its aid for refugees and to get it to engage more actively to end the Syrian conflict and not rely solely on Russian-brokered terms.

EU leaders denounced the move as blackmail even as they scrambled to appease Erdogan, sending Bulgarian Prime Minister Boyko Borissov as an emissary in the early days of the crisis.

Borissov reportedly relayed an offer of around one billion euros in additional financial assistance on top of the existing six billion agreed under the terms of a controversial 2016 deal whereby Turkey serves as a holding pen for refugees who could otherwise flood Europe, as they did in 2015.

Erdogan scoffed at the sum, saying he wouldn’t take it in a thinly veiled ploy for more. He apparently came back empty handed from a March 9 meeting in Brussels with EU Council President Charles Michel and EU Commission chief Ursula von der Leyen — vowing to keep the borders open soon after.

The immediate crisis was staved off when Turkey and Russia agreed to a cease-fire on March 13 that narrowed the chunk of Idlib where rebels dominated by Hayat Tahrir al-Sham (HTS), a former al-Qaeda affiliate, operate under the protection of the Turkish military.

Contrary to reports from pro-regime media outlets, “HTS is abiding by the cease-fire despite publicly criticizing certain elements within the agreement,” observed Elizabeth Tsurkov, a fellow at the Foreign Policy Research Institute who closely monitors the Syria conflict. “HTS has largely avoided violating cease-fires with the regime for about two years now, as the group increasingly shifts its priority to maintaining control over Idlib rather than attempting to topple the … regime, a goal that seems beyond reach at the moment,” Tsurkov told Al-Monitor.

Ibrahim Assil, a Syria scholar at the Middle East Institute, said the EU could absolutely make a difference by “pressuring Russia to never continue its military solution and commit to the cease-fire.”

He told Al-Monitor, “Freezing the lines of the conflict in Syria is a red line that should never be crossed again. The United States and the EU should help Turkey maintain the cease-fire agreement and hold Russia accountable.”

While the Euro bloc has repeatedly condemned Turkey for weaponizing refugees, it has said little about the treatment meted out by EU member Greece to those who managed to penetrate its borders. Human Rights Watch lambasted Greece in a statement today saying it has “detained, assaulted, sexually assaulted, robbed, and stripped asylum seekers and migrants, then forced them back to Turkey” even as “top EU officials have praised Greece’s border control measures and provided support through the European Border and Coast Guard Agency." One Syrian man told the watchdog group that Greek security forces had touched his wife’s breasts and tried to remove her headscarf and trousers, while beating him and his two-year-old daughter with a plastic stick when he sought to fend them off.

Back in Idlib, millions of desperate civilians face a new threat in the coronavirus, aid agencies warn. Jomana Qaddour, co-founder of the humanitarian relief organization Syria Relief and Development, said, “We are very concerned about the spread of coronavirus in Syria, a country whose government continues to deny any outbreak of the virus and has weaponized vaccines in the past, like polio vaccines in 2013-2014.”

Hers and other relief outfits have teamed up with the United Nations to draft emergency response plans for northwest Syria, where no cases have yet been confirmed and suspected cases have been tested and proved negative.

Assil said, “Can we imagine the situation the refugees have in their camps? Refugee communities are among the most vulnerable in front of such a deadly virus, and the world should help them before it’s too late.”

Editor's note: March 17, 2020. This article has been updated since its initial publication to reflect the rise in the number of cofirmed coronavirus cases.