Egypt has finally reopened its oldest pyramid after 14 years of restoration work, but the timing could have been better. 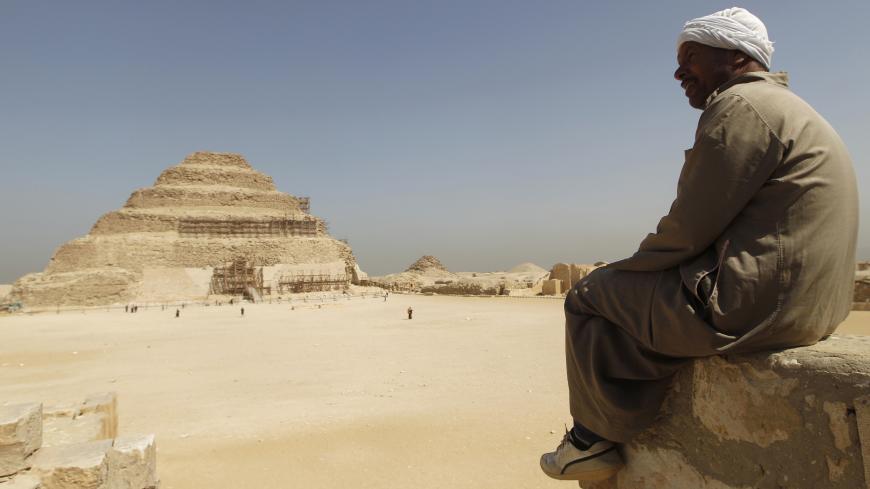 A guide sits on a stone as he looks at the Djoser's step pyramid, in Saqqara, Egypt, March 5, 2011. - REUTERS/Peter Andrews

No tourists are in sight near Giza's pyramids as the coronavirus pandemic takes its toll on the country’s tourism industry, casting a shadow over the reopening of Egypt’s oldest pyramid after the completion of a major restoration project.

Egypt has reopened its oldest pyramid, Djoser in Saqqara, south of Cairo, after a major restoration project that lasted 14 years. Djoser, a 4,700-year-old pyramid located in Memphis, the first Egyptian capital, is the oldest standing pyramid in Egypt. Its restoration cost 104 million Egyptian pounds (approximately $6.7 million), according to the Egyptian government.

The March 5 reopening, which took place at the famous amphitheater at the foot of the step pyramid, offered some good news for the country’s tourism sector, which has been dealt a severe blow from the coronavirus, as well as the archaeological sector.

Secretary-General of the Supreme Council of Antiquities Mostafa Waziri said that the restoration is one of the Ministry of Tourism and Antiquities' most important projects.

“The reopening of such an old pyramid will not only brighten the outlook of Egypt’s tourism industry, as many tourists would be interested in visiting the monument, it also sends a positive message about Egypt’s commitment to preserving and restoring its ancient monuments and sites,” Waziri told Al-Monitor.

He explained that the pyramid's burial chamber and internal corridors have been cleaned and renovated.

“The state is currently carrying out huge construction projects across the country, and paying attention to this pyramid and other monuments are part of the government’s development plan,” Ahmed El Shami, an economist and professor of feasibility studies at Ain Shams University, told Al-Monitor.

Shami added that restoring and developing ancient sites will reinvigorate tourism, which injects foreign currency into the state’s coffers.

Hossam Akawy, a member of the Red Sea Tourism Investment Association, pointed out that the Djoser pyramid is not only an Egyptian monument but part of the world's cultural heritage. Inscribed in UNESCO's World Heritage List in 1979, the pyramid is considered the oldest stone building in the world. It was constructed by Amenhotep during the reign of King Djoser (2667-2648 BC) from the Third Dynasty. The structure, which reaches 60 meters in height, is composed of six layers and passages leading to the main burial chamber, which is 28 meters deep and seven meters wide.

“It is a very important monument and preserving it is of international interest,” Akawi said, adding that Egypt is also nearing the opening of the Grand Egyptian Museum, which is expected to attract thousands of tourists by the end of this year.

Tourism has become the country’s third-largest source of national income after remittances from Egyptians abroad, which ranked first with $26.4 billion, and non-oil exports that came second with $17.1 billion.

But the industry has been dealt a severe blow by the outbreak, with 45 cases detected on a Nile cruise ship traveling from Aswan to Luxor.

Prime Minister Moustafa Madbouli said Sunday Egypt now has recorded 109 coronavirus cases. A German national and an Egyptian have died from the virus so far.

Strict travel measures taken by several world countries will greatly affect tourism in Egypt. Tourists from Arab countries, especially from Saudi Arabia and Kuwait, have canceled plans to visit Egypt as their countries have suspended their flights. Italians and Chinese visitors have followed suit.