Some analysts fear long-term effects on Egypt’s tourism sector from the coronavirus outbreak. 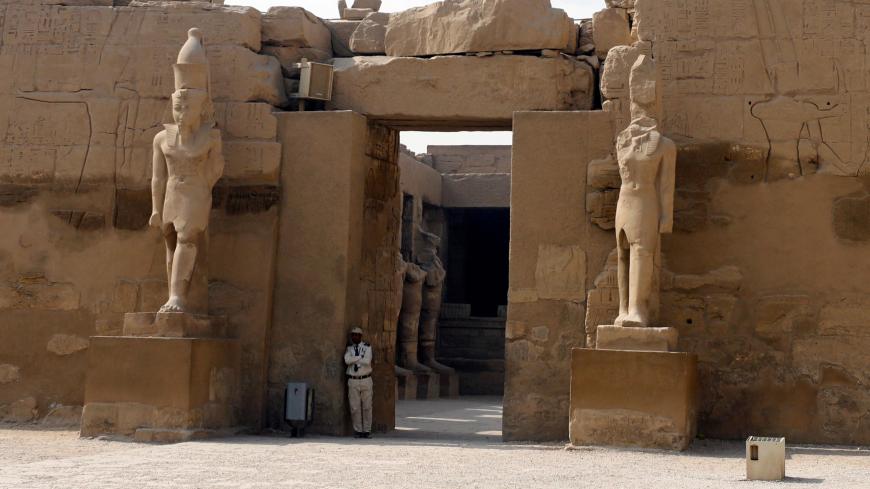 A guard stands at the Karnak Temple, following an outbreak of coronavirus, in Luxor, Egypt, March 9, 2020. - REUTERS/Mohamed Abd El Ghany

In the Upper Egyptian city of Luxor, tour guide Eman Mohamed has sensed a notable decline in tourists over the past month, after the outbreak of the coronavirus.

“Coronavirus has really affected tourism here,” Mohamed said. “Many hotel reservations have been canceled and tourists can barely be seen at tourist sites.”

Since the mid-February announcement of the first infection of coronavirus in Egypt, the number of infected people has reached 196 in Egypt as of March 18, including 45 people onboard a Nile cruise ship between Aswan and Luxor, carrying French, American and Indian tourists. Six people have died so far.

Egypt announced the suspension of flights at all airports from March 19 to 31 as a measure to prevent the spread of coronavirus.

Tourism and Antiquities Minister Khaled el-Anani said in press statements that monthly tourism losses due to the lockdown would reach $1 billion.

Anani added that the decision to suspend air traffic until the end of March was carefully studied, explaining that during this period, hotels and tourist facilities would be sterilized.

“We lost a lot of money, especially since the monthly tourism revenue is $1 billion, but the health of Egyptians is more important,” he added.

Tourism experts said that preventive measures taken by Egypt and other countries would lead to a sharp drop in tourists to Egypt.

“Certainly, the measures and precautions taken by Egypt and other countries as a result of the coronavirus outbreak will affect the movement of travel around the world and thus tourism,” said Adel Nagi, a tourism expert and a member of the General Assembly of the Chamber of Tourism Establishments.

Nagi told Al-Monitor, “The situation will become clearer in reservations for the summer season in June and July, when I expect that the virus will start to be contained,” he added.

Another tourism expert and a member of the Chamber of Hotel Establishments, Sameh Abdel Moneim, was optimistic.

“The losses suffered by tourism these days after the decision of some countries to ban travel to Egypt as well as the suspension of flights at all Egyptian airports are a temporary event due to global tension and fears over coronavirus,” he said.

He added that this matter will not exceed a few weeks at most, and the tourist flow will return to normal after the virus is controlled.

Abdel Moneim, meanwhile, called upon the Egyptian government to launch a multibillion-dollar stimulus program to compensate workers in the tourism sector for the losses they will incur.

“Those people will lose their jobs and the government has to compensate them and to find alternative jobs for them,” he added.

Until recently, Egypt was allowing tourists to visit popular sites, with the government stating that Egypt had few coronavirus cases and therefore it was safe. That changed when 45 tourists were tested positive on a Nile cruise ship in Luxor, prompting officials to conduct more testing in the tourist city.

Before the outbreak of coronavirus, Egypt’s tourism industry was flourishing. Tourism revenues in Egypt jumped by more than 28%, to reach about $12.2 billion in the fiscal year 2018-2019, ending last June 30, compared to $9.8 billion during the fiscal year 2017-2018.

Tourism was the country’s third source of national income after remittances from Egyptians abroad, which ranked first, with $26.4 billion, and non-oil exports, with $17.1 billion.

Ahmed el-Shami, an economist and professor of feasibility studies at Ain Shams University, said that the slowdown in the tourism industry would affect the national economy and the government should be ready.

“The government is now in front of a big challenge and it has to find solutions, otherwise things will fall apart and will get out of control,” Shami said.