From cannabis to cologne, Turks flaunt their ‘cures’ to coronavirus

As the number of coronavirus cases quadruples in Turkey, columnists and health gurus return to tradition: soup and cologne. 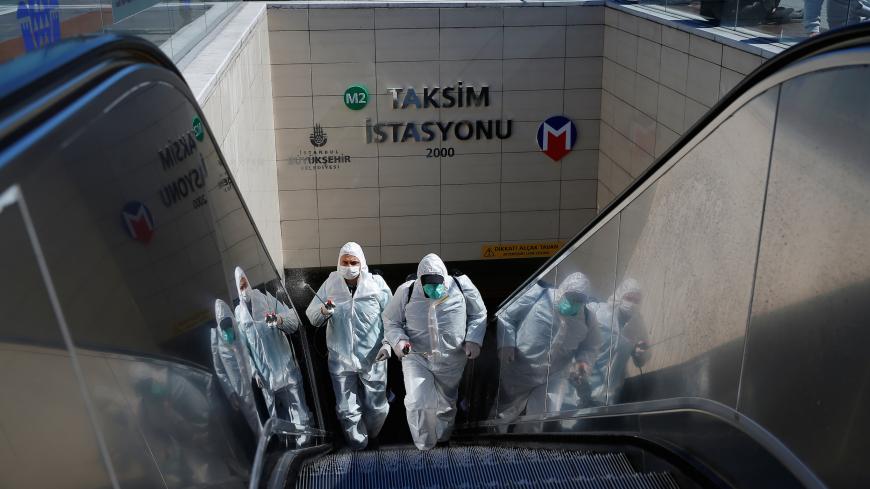 As the number of confirmed cases of coronavirus reached 98 in Turkey March 17, creative Turks have come up with their own "cures," from cannabis to sheep's trotter soup.

Cannabis tops Turks’ list of absurd cures for COVID-19. Abdurrahman Dilipak, a prominent Islamist columnist for daily Yeni Akit, advocated its use in his March 12 column, suggesting the use of hemp, a subtype of Cannabis sativa plant that grows in central Anatolia, to fight the virus.

Dilipak wrote that the best remedy against the coronavirus is CBD and THC, and that people can order these substances from abroad or use pure hemp oil if they can find it in Turkey. “It is said that the development of a vaccine against the coronavirus would take six months,” he wrote. “If Turkey decides to increase its cannabis plantation in April, the strong harvest we would get in four months can create a major barrier to the global spread of the virus.”

He urged his readers against receiving vaccines developed abroad, because these would likely contain sterilization agents, tying the whole thing to an Aryan plot.

Medical circles laughed off Dilipak, who has around 700,000 Twitter followers — about six times more than his paper's. “Could we just authorize this guy, who thinks hemp is the mother of all medicines, to grow his own cannabis?” tweeted physician Hakki Irgil.

Several people called on the judiciary to initiate a case against Dilipak for promoting drug use.

Dilipak, a staunch Islamist, provoked the wrath of the Turkish medical sector two years ago, when he boasted of treating his high eye pressure with the ancient method of bloodletting. A firm advocate of hemp as a miracle plant, he claims it will heal diabetes, high blood pressure, asthma and psychological disorders. He sees its unhindered production as a major tool to increase Turkey’s geopolitical and economic importance and has been lobbying for its liberalization. He has supported President Recep Erdogan's pledge to increase hemp production which has been restricted for several decades due to anti-narcotics regulations.

As the coronavirus dominated Turkey's agenda, a foreign journalist who used to live in Turkey and tweets under the handle @AnkaraliJan, said the Twittersphere had three gangs: “Why coronavirus isn't as bad as you think,” “why coronavirus is much worse than you think," and "Why coronavirus proves my cultural practices were superior all along.”

The last group, in both the virtual and the real world, is confronting the outbreak with two local items: lemon-scented cologne and a traditional soup made of sheep's head and trotter, known in Turkish as kelle paca, an acquired taste that Turks believe cures hangovers and colds. Most foreigners steer clear of it.

Professor Canan Karatay, a popular cardiologist turned healthy living guru, first voiced "the kelle paca cure." It was readily adopted by the public, who considered flocking to “esnaf lokantalari,” or traditional small restaurants, for a meal of kelle paca was a far better option than social distancing or, worse, social isolation.

“The outbreak of coronavirus led to high demand for kelle paca,” Hurriyet reported March 16. The report shared a tweet of Erik Weststrate, the media-savvy deputy head of mission of the Netherlands Embassy in Ankara: “At the embassy, we took precautions against #coronavirus: no more handshakes, sanitizer, paper towels, and kelle paca soup for increased resistance.”

“After the news articles, the kelle paca orders both at the restaurant and as take-away have increased,” said a waiter at Ismet Usta, a popular restaurant in downtown Izmir. “Not sure it would last, though. More and more people are staying home.”

“All of these remedies — from gorging your throat with vinegar to whatever soup, has no use,” Mehmet Ceylan, the president of the nongovernmental Infectious Diseases Association, said in a news program on NTV March 16. “These are unscientific and should not be spread [through the media or word of mouth].”

But the medical sector is less hostile to lemon cologne, a liquid that is 80% alcohol and offered to guests as a sign of hospitality in Turkish homes, cafes, restaurants and even intercity buses. Some municipalities now use it in public transport, too, to sanitize passengers' hands.

The traditional ethanol-based disinfectant, also used widely for “kolonyali mendil,” the lemon-scented wipes handed out in traditional restaurants, has been in such high demand that markets, pharmacists and perfumeries increased prices, shoppers lamented.

Engin Tuncer, the CEO of the cologne producer Eyup Sabri Tuncer, told NTV March 12 that the high street sales had quintupled, and online sales had septupled. “But we did not increase the prices in the last one year,” he said, though some other retailers and small producers admitted that they had to increase the prices by 30% because the cost of alcohol had increased. A 200 milliliter bottle of cologne can cost between 7 to 70 Turkish liras ($1.20 to $12), depending on the brand.

Given Turkey’s liberal vs. conservative political polarization, it came as no surprise that the renewed glamour of 80% alcohol cologne became an issue. “Some conservative circles long lobbied against the cologne wipes that were served in the Turkish Airlines, trying to replace them with nonalcohol wet wipes,” wrote Kemal Okuyan, a columnist at Sol news website, on March 12. “What happened? Corona brought the cologne back.”

A few days later, Turkey’s top religious affairs body, Diyanet, made a statement saying that it was allowed in Islam to use alcohol for sanitation and medical purposes as long as you did not drink it.