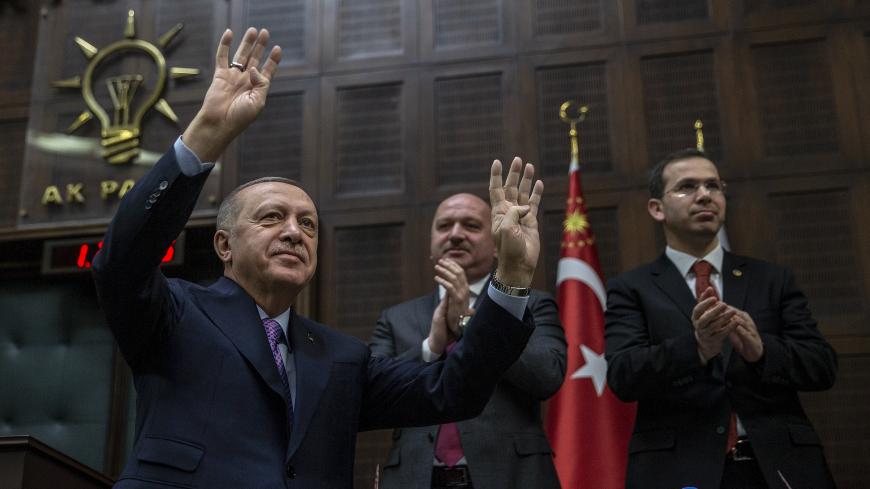 President of Turkey and leader of the Justice and Development Party (AKP) Recep Tayyip Erdogan greets party members as he attends the AKP's group meeting at the Turkish parliament in Ankara, Feb. 26, 2020. - Ali Balikci/Anadolu Agency via Getty Images

The implications of the Turkish-Russian fallout over Idlib go beyond Syria and represent a collapse of President Recep Tayyip Erdogan’s Islamist-driven approach to foreign policy.

Turkey is an isolated country today that has confrontational ties with the United States and Russia, as well as the Arab world and Europe. It is trying to ensure its vital security interests against this difficult backdrop.

But the few friends Ankara has left, such as Qatar, Pakistan or Azerbaijan, provide Turkey with no strategic value that could strengthen its hand against its adversaries.

The only option Erdogan has is to try and play the United States and Russia against each other, as he has been doing for some time now, but this approach seems to also have run its course.

Erdogan’s bellicosity in international relations and disdain for diplomatic niceties as well as the advice of professional diplomats may go down well with his die-hard supporters.

Nevertheless, an increasing number of Turkish analysts — including some former supporters of Erdogan — believe that the situation Ankara finds itself in Syria in particular is largely, if not totally, self-inflicted.

They also fear that a similar debacle is emerging in Libya, where Turkish soldiers have also started to incur losses.

It was only four months ago, just before Erdogan ordered the launch of Turkey’s Operation Peace Spring against the US-supported People's Protection Units (YPG) in northeastern Syria, that there was speculation about a potential confrontation between Turkish and US forces.

At the same time, the “strategic ties” Turkey was ostensibly developing with Russia were being touted by Turkish Foreign Minister Mevlut Cavusoglu as “unshakable.”

Ankara had hoped that these ties would counterbalance Turkey’s deteriorating relationship with the West, and especially with the United States.

Erdogan’s decision to purchase Russian made S-400 air defense systems — over the objections of Turkey’s NATO allies — was also considered to be more of an act of defiance of the West than a coherent move based on a sound military rationale.

Erdogan’s biggest miscalculation is proving to be the reliance he placed on Russia.

Even after the situation in Idlib calms down — as it is likely to do eventually (albeit most probably at a cost to Turkey) since a Turco-Russian war is not something Ankara can sustain — the cracks in the relationship will remain.

Put another way, the tables in Syria have turned again for Ankara only four months since it was confronting the United States east of the Euphrates River.

Erdogan is pointing an accusing finger at Russia now and referring to it in barely shrouded terms as an aggressor. Meanwhile, he has turned to the United States again for support, even calling on it to deploy Patriot missiles against the Syrian-Russian threat.

It is no surprise that some cynical commentators are suggesting that instead of seeking US Patriots, Ankara should deploy the Russian S-400s to ward off the threat from Syria.

Turkey’s campaign in Idlib against the Syrian army has already cost the lives of 18 Turkish soldiers and military contractors, some killed by Russian air power.

The casualties are expected to rise in the coming days and weeks since Erdogan is determined to forge on with what the opposition believes is his, not Turkey’s, war.

Veteran political commentator Fikret Bila said he believes this is a war Erdogan cannot win. He argued that Turkey’s main objectives in Syria are toppling the Assad regime and securing a voice for radical Islamists in that country. Bila does not believe these objectives are achievable.

“Defeating the Syrian army, which Russia is supporting … does not appear to be within the realm of possibility,” Bila wrote in his column for the independent news portal T24.

Fehmi Koru, another veteran columnist who once stood close to Erdogan and the ruling Justice and Development Party, is also pessimistic about the success of Erdogan’s policies.

Referring to Ankara’s vacillation between Washington and Moscow, Koru doubts that any results that could be considered a “victory” for Turkey will be obtained from this approach.

“I fear that the policies Turkey has implemented in Syria since 2011 … will all result in failure,” Koru wrote in his personal blog.

Erdogan is clearly irked by such disheartening commentary. In order to shore up domestic support for his Syria policy, he has elevated Turkey’s engagement in Syria to the level of the Turkish War of Independence of 1919-1922.

In his address to party members Feb. 15 where he made this remark, Erdogan also repeated his ultimatum to Syria to pull its forces back to the cease-fire line agreed on with Russia in Sochi, Russia, in September 2018.

He warned that if the Syrian army did not withdraw by the end of February, Turkey would force it to do so militarily. “These people are our brothers and we will not abandon them to the mercy and persecution of tyrants,” Erdogan said.

“We are prepared to die for this if need be,” Erdogan added.

He has also been stressing in his various public speeches that Turkey cannot cope with the hundreds of thousands of refugees piled up on its borders following the regime's Russian-backed onslaught in Idlib.

His attempt to try and equate Ankara’s engagement in Syria with Turkey’s War of Independence is not convincing everyone. Political commentator Murat Yetkin underlined the gross exaggeration this analogy entails. “No offense, but it is wrong for President Erdogan to see the War of Independence prosecuted by Mustafa Kemal Ataturk and his friends for the liberation of the homeland, and the establishment of the republic, with what is happening in Syria and Idlib,” Yetkin wrote in his Yetkin Report blog.

Yetkin added that Erdogan’s approach was also problematic because it involves military operations on another country’s territory, which, he said, poses “international legal issues according to rules set by the United Nations.”

Erdogan is, of course, justified in his concerns about a new flood of Syrian refugees. The majority of Turks are also deeply concerned about this. Turkey currently hosts up to 4 million Syrians and the burden is growing.

Nevertheless, many fail to see how Erdogan expects to resolve the refugee problem by going to war against the Syrian regime when he could be talking with it to chart a rational course.

Erdogan, however, rejects any notion of speaking to Syrian President Bashar al-Assad. Imbued with a firm Sunni-based ideological outlook, and an innate sympathy for the Muslim Brotherhood in all its forms, Erdogan believes that talking to Assad would be a betrayal of his coreligionists. Assad is an Alawite; Alawites are an offshoot of Shiite Islam.

Instead, Erdogan continues to send reinforcements to the few sections of Idlib that Turkey still controls with the support of the Syrian National Army that it funds and supplies, and a motley crew of jihadi fighters.

Erdogan is also closed to all domestic calls from the opposition to withdraw Turkish forces from Syria since this would amount to an admission of defeat. As matters stand, his political woes at home over a host of economic and political reasons are increasing.

Retired ambassadors Ali Tuygan and Yusuf Buluc underlined in a jointly penned article that “the most striking defect” of Erdogan’s Syria policy is “its total lack of national endorsement.”

“President Erdogan has said military operations can start any moment. Yet Turks hardly know where the country is heading except that their sons will be exposed to deadly harm if Damascus does not heed the warning,” Tuygan and Buluc wrote in their Diplomatic Opinion blog.

“At least at this critical juncture the people of Turkey are entitled to know exactly which of its interests will be served, what causes will be pursued, which instruments will be used and at what cost,” they added.

Indicating that Turkey’s attempt at regime change in Syria had failed, Tuygan and Buluc said, “It is time for the Turkish government to climb down and face the reality on the ground.”

They recommended a withdrawal of Turkish forces from Idlib and a return to the diplomatic track.

Facing the reality on the ground in Syria, however, was never Erdogan’s strong point.

As matters stand, he appears determined to be dragging Turkey into the quagmire. If he wins, he will secure a massive victory for himself. If he loses, though, the country loses with him.