All eyes are on Ankara and Moscow in the wake of the severe attack on a Turkish military convoy in Idlib, which threatens to unleash developments that could change all equilibriums in Syria. 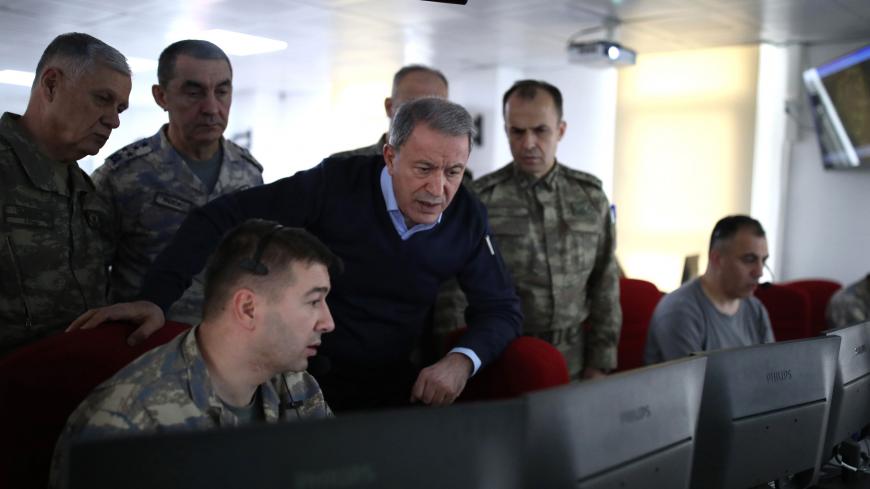 Turkey woke up Feb. 28 to its gloomiest day in the Syrian conflict, mourning the deaths of at least 33 soldiers in a ferocious attack the previous day that brought tensions with Moscow and Damascus to an unprecedented level.

What exactly transpired on Feb. 27? At around 5 p.m., a Turkish mechanized infantry battalion, comprised of about 400 soldiers, became the target of an airstrike on a road between al- Bara and Balyun, some 5 kilometers (3 miles) north of Kafr Nabl in southern Idlib. According to local sources contacted by Al-Monitor, two Russian Sukhoi Su-34 and two Syrian Su-22 fighter jets had launched intensive bombings of Turkey-backed Syrian National Army (SNA) targets in southern Idlib at around 11 a.m. that day. The same jets hit the Turkish convoy in coordinated action, the sources said. A first, a relatively lighter strike by the Su-22s forced the convoy to stop, after which the pounding intensified, forcing the soldiers to take shelter in several roadside buildings. What followed next was likely the dropping of KAB-1500L bombs — a variation of advanced laser-guided bunker buster bombs capable of penetrating to depths of up to 20 meters (65 feet) — by the Russian jets. Two of the buildings collapsed in the attack, leaving the Turkish soldiers under the rubble.

Moscow said Feb. 28 that Russian planes had not carried out strikes in the area, and that Russia did its best to ensure the Syrian army ceased fire to allow the evacuation of the troops. It said, however, that the Turkish soldiers should not have been in the area, where counterterror operations were underway, and Ankara had failed to relay information about their presence in advance.

Despite the denial of Russian involvement and a subsequent phone call between the Turkish and Russian presidents, the escalation appears to be a deliberate, well-calculated Russian move and Moscow’s attitude could hardly be taken for granted as a sign that it is willing to step back to de-escalate the crisis.

Ankara’s official death toll stood at 33 on the morning of Feb. 28, with 60 other troops wounded, among them 16 with serious injuries. It was still unclear whether any soldiers could be still trapped under the rubble. According to unconfirmed information obtained by Al-Monitor, the actual death toll is somewhere between 50 and 55.

What caused Russia to react so violently and provocatively while a Russian delegation was holding talks in Ankara in a bid to ease the tensions in Idlib?

The battlefield had grown highly explosive since Feb. 20, when two Turkish tank crewmen were killed in an air raid on Turkish M60 Sabre tanks in southern Idlib. The situation escalated further on Feb. 25-26, when — amid ongoing operations by Syrian government forces, backed by Russian airpower, in southern Idlib — SNA forces, supported by the Turkish military, launched a counterattack in the Nayrab-Saraqeb area, taking control of Nayrab and marching on to Saraqeb, which lies at the junction of the strategic M4 and M5 highways, while managing to block the M5 at several points only days after the road had been reopened.

Things came to a head on the morning of Feb. 27, when according to Russian media, Russian aircraft flying over southern Idlib became the target of intensive fire from man-portable air-defense systems, known as MANPADS, from Turkish military outposts in the area. Simultaneously, MANPADS and drone attacks reportedly threatened the Khmeimim base, Russia’s key military facility in Syria. Russian sources, contacted by Al-Monitor, claim that more than 15 MANPADS attacks, carried out directly by Turkish troops, targeted Russian and Syrian jets conducting air raids in southern Idlib after 1 p.m. that day. Some Russian aircraft allegedly suffered damage as they maneuvered to escape the fire. As the attacks on the planes and the Khmeimim base reached an intensity deemed intolerable, the Turkish convoy was hit at 5 p.m.

After the attack, Moscow rejected Ankara’s request to open the Idlib air space to Turkish helicopters to airlift the casualties. As a result, the dead and the wounded were transported by road to a hospital in Reyhanli, a Turkish border town about 70 kilometers (43 miles) from the area.

It was not before 9:30 p.m. that the Turkish public began to hear about the mayhem on social media. At 11 p.m., President Recep Tayyip Erdogan convened an emergency security meeting in Ankara. Remarkably, Ankara singled out the regime as the culprit, with no reference to Russia, in its initial reactions, vowing a powerful retaliation. This is an important sign that Ankara is unwilling to break ties with Moscow immediately, which suggests it will maintain a rhetoric blaming the regime for the attack on the convoy.

Soon after the Turkish public got wind of the bloodshed on social media, the internet slowed across the country and widely used communication means such as Twitter and WhatsApp were throttled. In other words, the authorities appeared to hamper alternative information sources, while the conventional media began to disseminate reports and footage of Turkish troops striking Syrian regime forces in a bid to enforce a perception that the Turkish martyrs were being avenged. Erdogan’s communication chief Fahrettin Altun tweeted a series of messages, vowing a powerful response to “the murderous regime” and underscoring Ankara’s resolve to not withdraw its forces from Idlib.

And what could happen next in Idlib? The picture on the ground is clear: Ankara is now in a conventional war with Damascus, albeit an undeclared one, and has come to the brink of a conventional confrontation with Moscow. Ankara’s blaming of the regime could be seen as an ongoing effort to keep dialogue channels with Moscow open. Yet the signals coming from Moscow are not very encouraging. A face-to-face meeting between Erdogan and Russian President Vladimir Putin appears as the only means that could de-escalate the Turkey-Russia crisis now. According to Erdogan’s communication chief, the two leaders “agreed to meet face to face as soon as possible” during their phone call, yet the Kremlin’s statement was more ambiguous, saying they agreed “to examine the possibility” for such a meeting.

The severity of the death toll is, no doubt, a huge blow for Ankara, but Moscow itself might have failed to foresee such a bloody outcome. The attack will obviously lead to the spillover of tensions beyond Idlib. Turkey is likely to come under mounting pressure to withdraw its military presence in the Euphrates Shield pocket and the Afrin area to the west of the Euphrates and even from areas to the east of the river, which it took hold of in October.

The most critical question now is whether Ankara will be prepared to end its military presence in Syria. Such a move appears unlikely in the near future. Ankara will at least seek to bargain and extract certain concessions from Moscow for a gradual pullout of its troops.

A dramatic escalation in the clashes appears unlikely in the next several days as the actors on the ground — Ankara, Damascus, Moscow and Tehran — will probably try to decide their positions according to their respective moves and inclinations.

Despite Ankara’s hopes for Western support, neither NATO nor the United States are likely to get militarily involved in the crisis immediately. Both will probably pursue a wait-and-see approach for a while to get a better picture of how the Ankara-Moscow crisis evolves.