Tourism is providing a test case of Istanbul Mayor Ekrem Imamoglu’s advocacy of “local participatory democracy," prompting a struggle with the government in Ankara over prominent landmarks in his city. 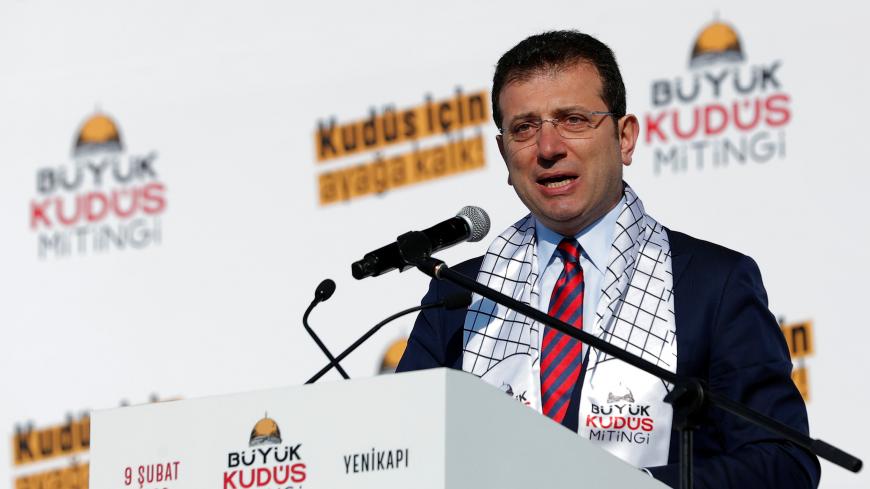 “Local participatory democracy” is a favorite catchphrase of Ekrem Imamoglu, mayor of Istanbul, Turkey’s largest city. It is also the approach he has adopted for rethinking and revamping the Istanbul Metropolitan Municipality (IBB), one of the biggest public administrations in Turkey.

Imamoglu, elected last year and a member of the opposition Republican People’s Party, has set his sights on shaking up top-down governance and lack of transparency by getting experts and the general public more involved in decision-making processes. In a nutshell, what he seeks is a strategy for the future “based on common sense.” One obstacle Imamoglu faces is how to overcome government resistance to implementing such a policy, for which the tourism sector has become a test case.

Since November 2019, Imamoglu has held high-profile events to launch new permanent structures within the IBB and flexible consultative bodies, the two tools of his new approach. On Feb. 12, Imamoglu presented the Istanbul Planning Agency as the centerpiece of his quest for local participatory democracy and the main pillar of a renewed IBB. He described it as a “new beginning” for the city, a “model set to become an example to the world.”

The municipality had a planning department in the past, but, Imamoglu explained at the launch, attended by Al-Monitor, “It was closed due to a political decision,” meaning by Ankara. The new planning agency consists of four sections: Vision 2050, to elaborate long-term strategies and goals; the Istanbul Institute, a scientific agency guided by a network of researchers charged with studying practical issues, such as transport and green spaces; a statistics bureau, to gather data on various aspects of society; and a design division to develop a new identity.

On Feb. 17 under the banner “Istanbul has a brand new story,” Imamoglu unveiled another piece of his reorganization, the Istanbul Investment Agency. The goal of the new agency, he said, is “to turn Istanbul into a city that attracts more international investments and entrepreneurs, as well as foreign talents.”

The new planning and investment agencies will be run by permanent staff while commissions of experts, professionals, and institutional representatives will offer their input to decision-makers on 20 thematic platforms, the first of which, dedicated to tourism, was established last November. Imamoglu's local participatory democracy has become thoroughly operative for the tourism platform and has already produced disagreements with Ankara, including a public war of words.

Ozcan Bicer, the administrative coordinator for the Istanbul Tourism Platform, explained to Al-Monitor how it is supposed to work. “Our method is to seat everybody at the same table, representatives from the ministry included, and our goal is to elaborate a strategy, a masterplan,” he said.

According to official statistics, Istanbul welcomed 15 million visitors in 2019. There is, however, no comprehensive strategy to enhance individual experiences and maximize revenues. “The last study was made in 2012, through interviews at the airport,” Bicer said, adding that data collected by the new planning agency will be used “to understand not only where tourists come from but also why they come.”

At the launch of the tourism platform in November, Imamoglu said his priorities are to strive for inclusiveness in decision-making and advice and to also forge an independent path for Istanbul and for his leadership separate from policies and priorities set by Ankara. The mayor stated bluntly, “We have to end in a reasonable time this position of being the cheapest destination in Europe.… Since the perception of Turkey as a cheap destination can't change in the short term, we have to create an independent brand of Istanbul.”

Imamoglu's stated objective is to attract two or three times more visitors than today and for Istanbul to become an attractive destination for high spenders. In other words, he wants quantity, but also quality. Among his first proposals is to train security personnel and municipality employees as “tourism ambassadors,” people to help tourists at information kiosks and even on the streets, and to make Istanbul and every district along the Bosporus a place of creativity and festivals in every season.

Additional priorities were set and ideas offered at the first gathering of the Istanbul Tourism Platform on Jan. 20. Attendees — including members of the sector, academia and journalists — were divided into sub-sectors, such as lodging, transportation, and so on, and apparently almost every thematic group identified reckless and fraudulent taxi drivers as the most urgent problem. It was established that a digital app that would allow tourists to book and evaluate their rides might be the best solution for reining them in.

Many were in favor of decongesting the tourist hotspot of Sultanahmet — the historic peninsula that is home to Topkapi Palace, Hagia Sophia and the Blue Mosque — and highlighting lesser-known neighborhoods around the city and making them more accessible. Proposed alternative destinations include the multicultural and historic Galata and Pera in central Istanbul and the ancient Greek settlement of Bathonea on the Marmara Sea some 12 miles west of the city center.

Sedat Bornovali, the Istanbul president and national vice president of the Chamber of Istanbul Tourist Guides, agrees with the assessments on taxis and diversifying tourist flows. Also a member of the Istanbul Tourism Platform, he told Al-Monitor, “Taxis are for us very important because they link hotels and the start or endpoints of itineraries.”

The Chamber of Istanbul Tourist Guides have prepared alternative itineraries for experiencing Istanbul — one, for example, features the mosques and public structures built by the celebrated architect Mimar Sinan, who was active for most of the 16th century — and have informed members about them. The objective is to entice tourists to stay longer than the current average of two or three nights.

There is a convergence of approaches and priorities between the IBB and the Istanbul Chamber of Tourist Guides and other professional groups in the tourism sector, but the same cannot be said of the IBB and the central government. In fact, even when the Justice and Development Party, led by President Recep Tayyip Erdogan, controlled every level of local administration — Istanbul's central districts, the metropolitan municipality and city government — it never developed a common strategy because of personal and political rivalries. Given this, how can common goals be possible today, when Imamoglu and Erdogan belong to opposing parties and take opposing approaches to decision-making?

The battle between the municipality and the government is already underway. Culture and Tourism Minister Mehmet Nuri Ersoy has announced a plan to transform the Galata Tower and its surroundings into an integrated space for cultural events, revoking the municipality's operating rights. In response, Imamoglu launched a legal battle and said the minister's remarks — along the lines of “we’ll take this, we’ll do that” — were “not nice” and that his attitude was far from setting a good precedent on running a “great and ancient city.” He also invited the minister to cooperate. “If they want to contribute to tourism, we are good friends and partners,” Imamoglu said. “They should not hesitate to meet and talk to us.… We are just a phone call away.”

Another example of the distance between Istanbul and Ankara is even more poignant. While speaking at the launch of the Istanbul Planning Agency, Imamoglu announced that the first project of its public design section would be a workshop and exhibition about the future of Taksim Square, to be held on March 31. In the meantime, on Feb. 15 in the center of the square, the municipality inaugurated the Meeting Point, a temporary open-air amphitheater of wood and steel with a covered space for the exhibitions. Two days later, it was revealed that the structure had apparently not been authorized by the Ministry of Culture and Tourism, thus requiring its removal. On Feb. 23, personnel from the municipality began to dismantle it. Imamoglu tweeted, “#MeetingPoint’s Taksim time is ending today. It’s beautiful to come together. One day we will surely meet. Very soon.” The struggle continues.